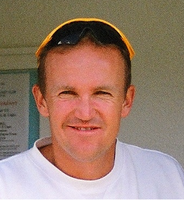 Andrew Flower OBE (born 28 April 1968) is a British-Zimbabwean cricket coach and former cricketer. As a cricketer, he captained the Zimbabwe national cricket team. He was Zimbabwe’s wicket-keeper for more than 10 years and statistically by far the finest batsman the country has fielded.

He was, as well, the former England cricket coach. The Mirror has reported that Flower has become a British citizen.

Flower was born in Cape Town, South Africa, and starting from his high school days at Oriel Boys’ High School and Vainona High School played most of his career alongside his younger brother Grant Flower. He is considered to be one of the best wicket-keeper batsmen, alongside players such as Australian Adam Gilchrist. Flower made his international debut in a One Day International against Sri Lanka at New Plymouth, New Zealand, in the 1992 Cricket World Cup. A good player of spin, he made 550 runs in a Test series against India in 2000/01. This tally came in just four innings and he was only dismissed twice. He is one of the few players to score a century on ODI debut.

Towards the end of his career, Flower achieved international recognition when he and teammate Henry Olonga wore black armbands during the 2003 Cricket World Cup match against Namibia to protest against Robert Mugabe‘s policies. He and Olonga released a statement on 10 February, stating in part: Andy Flower’s career performance graph. The red bars indicate the player’s test match innings, while the blue line shows the average of the ten most recent innings at that point

This act led to pressure from Zimbabwe’s government and Flower’s retirement from Zimbabwean cricket. He later played an English county cricket season for Essex and an Australian domestic season for South Australia.

His aggregate score of 341 in the first Test against South Africa in 2001 is the second highest ever by a batsman on the losing side.

Andy Flower is also the only player to score an ODI hundred on debut in a world cup match. He also has the record for the most matches (149) to score his second ODI ton after scoring a century on debut, when he did it in only in his 150th ODI.

He also holds the record for the highest ever test score posted by a wicketkeeper batsman in an innings of a test (232*).

On 7 May 2007, Flower was appointed Assistant Coach of the England team, replacing Matthew Maynard. The Zimbabwean joined up with Peter Moores and the rest of the squad for the first Test match against the West Indies at Lord’s on 17 May 2007. Upon his appointment to this role with the ECB, Flower, having not played that season due to injury, ended his playing spell at Essex, bringing his playing career to a close.

On 15 April 2009, following England’s Caribbean tour, for which he was installed as interim team director following the departure of Peter Moores, he was appointed full-time team director. In the Summer of 2009, during his tenure as team director, England won The Ashes, beating Australia by two Test matches to one. In May 2010, they won the 2010 ICC World Twenty20 tournament in the West Indies. In November-January 2010/2011 England won the Ashes in Australia by three Test matches to one.

Flower was appointed Officer of the Order of the British Empire (OBE) in the 2011 Birthday Honours for services to sport.

On 13 August 2011 Flower led the England cricket team to become the number one ranked team in terms of test playing countries. On 22 December 2011, he was awarded the 2011 Coach of the Year in the BBC Sports Personality of the Year awards.

A major blip in his coaching career was the 5-0 drubbing by Australia in November-January 2013 – 2014 Ashes series. On 31 January 2014, Flower stepped down as head coach, a position he had held for five years. From March 2014, he continued his employment with the England and Wales Cricket Board as its ‘Technical Director of Elite Coaching’, a role that has involved mentoring English county coaches and looking at best practice in coaching and performance in other organisations. Since July 2014, this role has also encompassed him being head coach of the England Lions team,[15][16] most recently leading the side on an ODI tour of the UAE in January 2016. Later in 2016 he was appointed batting coach of Peshawar Zalmi. He was appointed as head coach for Multan Sultans

In September 2007, Flower became an Ambassador for the children’s charity, Hope for Children, and has assisted in raising thousands of pounds for needy children in Zimbabwe and around the world. In July 2011, Flower became an Ambassador for the malignant melanoma support group, Melanoma UK’, having suffered from the illness himself. He underwent surgery to remove a melanoma from his right eye in 2010. In the summer of 2012 Andy agreed to undertake another term as Ambassador to Melanoma UK. Having run the marathon in April 2012 Andy said It wasn’t a hard decision for me to continue in my role as Ambassador to Melanoma UK. They do an excellent job in patient support, fund raising and raising awareness of the dangers of the sun. I wish them continued success in the coming years and who knows, another marathon might be on the cards!