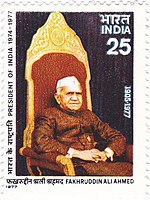 Ahmed attended St. Stephen’s College, Delhi, and St Catharine’s College, Cambridge. He was called to the Bar from the Inner Temple of London and began legal practice in the Lahore High Court in 1928.

He met Jawaharlal Nehru in England in 1925. He joined the Indian National Congress and actively participated in the Indian Freedom Movement. In 1942 he was arrested during the Quit India Movement and sentenced to 3 1/2 years’ imprisonment. He was a member of the Assam Pradesh Congress Committee from 1936 and of AICC from 1947 to 1974, and remained the Minister of Finance, Revenue and labour in 1948 Gopinath Bordoloi Ministry.

After Independence he was elected to the Rajya Sabha (1952-1953) and there after became Advocate-General of the Government of Assam. He was elected on Congress ticket to the Assam Legislative Assembly on two terms (1957-1962) and (1962-1967) from Jania constituency.

Subsequently, he was elected to the Lok Sabha from the Barpeta constituency, Assam in 1967 and again in 1971. In the Central Cabinet he was given important portfolios relating to Food and Agriculture, Co-operation, Education, Industrial Development and Company Laws.

Chosen for the presidency by the Prime Minister, Indira Gandhi, in 1974, and on 20 August 1974, he became the second Muslim to be elected President of India. He is known to have issued the proclamation of emergency by signing the papers at midnight after a meeting with Indira Gandhi the same day. He used his constitutional authority as head of state to allow him to rule by decree once the Emergency in India was proclaimed in 1975.

He is well known among Indian diplomats for his visit to Sudan in 1975. He was the second Indian president to die in office, on 11 February 1977. His death occurred after he collapsed in his office while preparing to attend his daily Namaz prayer. The cause of his death was a heart attack. Today his grave lies right across the Parliament of India next to the Sunhari Masjid, at Sansad Chowk, in New Delhi.

He was awarded an honorary doctorate by the University of Pristina, in Kosovo, in 1975, during his visit to Yugoslavia.

In April 1967, he was elected President of the All India Cricket Association. He was a member of the Delhi Golf Club and the Delhi Gymkhana Club from 1961.

In his honour a medical college Fakhruddin Ali Ahmed Medical College has been named after him at Barpeta Assam.