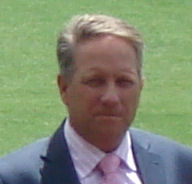 Ian Andrew Healy (born 30 April 1964) is an Australian former international cricketer who played for Queensland domestically. A specialist wicketkeeper and useful right-hand middle-order batsman, he made an unheralded entry to international cricket in 1988, after only six first-class games. His work ethic and combativeness was much needed by an Australian team. Over the next decade, Healy was a key member of the side as it enjoyed a sustained period of success. By the time of his retirement, Healy held the world record for most Test dismissals by a wicket-keeper.

Healy was a very useful batsman and improved dramatically during the second half of his career. All of his four first-class centuries were scored in Test matches. He could be handy as a hitter late in the innings during ODIs: he averaged 21 while scoring at a rate of 83.8 runs per hundred balls. Although touted as a potential leader of the team early in his career, a series of on-field misdemeanours counted against him when the position was vacant. He captained Australia in eight ODIs when the regular skipper Mark Taylor was injured.

Born in the Brisbane suburb of Spring Hill, Healy was educated at Brisbane State High School. Healy and his family relocated 600 kilometres (370 mi) north to the small town of Biloela in 1972, due to his father’s transfer in his job as a bank manager.[1]Rod Marsh inspired Healy to take up wicket-keeping; he also played basketball, soccer, squash and rugby league.[2] He represented the Queensland under-11 team and later attended a clinic conducted by the touring Queensland cricketers. The team’s wicket-keeper John Maclean gave him some specialist coaching, which gave his junior career further impetus.[1]

During his later years in the town, Healy played alongside adults, which accelerated his progress.[2] Returning to Brisbane with his family at the age of 17 he played for Brisbane State High School 1st XI and 1st Xv, he then joined the Northern Suburbs club in Brisbane’s grade competition in 1982. After three matches for the Queensland Colts as a specialist batsman, Healy made his first-class debut in 1986-87 as a replacement for the injured Peter Anderson. However, Anderson remained the first choice as the state’s wicketkeeper for the next eighteen months, during which time Healy managed only six first-class appearances.

Given his small number of games for Queensland, Healy’s selection for the Australian team to tour Pakistan in late 1988 was a major surprise.[1] The wicket-keeping position had proved a problem for Australia since the 1984 retirement of Healy’s boyhood hero, Rod Marsh. Wayne B. Phillips, Tim Zoehrer, Greg Dyer and Steve Rixon had all been tried with little success. Australian selector Greg Chappell had watched Healy’s progress in Queensland, and believed that he offered the lower-order batting stability and determined approach to the game that the Australian team was lacking.[2]

By his own admission, Healy was overwhelmed by his sudden elevation and took some time to settle into the team. The selectors persevered with him through the difficult Pakistan tour[2] and the subsequent home series against the West Indies, even though Australia lost both series.

An improvement in the team’s performances coincided with Healy’s establishment as a Test-class player. On the tour of England in 1989, he was safe behind the stumps in taking 14 Test catches, but averaged only 17.16 with the bat, as Australia won 4-0 to regain the Ashes. In seven Tests against New Zealand, Sri Lanka and Pakistan during the extended season of 1989-90, Healy accepted 23 catches and recorded a top score of 48.

Although Australia lost the series with the West Indies and drew with New Zealand in 1992-93, the team had a successful tour of England in 1993 when Healy hit his maiden Test century. His form had gradually improved, culminating in an unbeaten 102 at Old Trafford when he dominated a partnership with Steve Waugh. With the introduction to the team of Shane Warne, Healy was able to demonstrate his skills standing up to the stumps and reading the varied deliveries of the spinner.[4] In his first 39 Tests, Healy stumped two batsmen. In 14 Tests between 1992 and 1993, he stumped ten batsmen while taking 52 catches.

Healy followed up with another century, against New Zealand at Perth in 1993-94. Healy was also well known for his energy and optimism behind the stumps, and could frequently be heard on effects microphones encouraging the rest of the team, perhaps most prominently praise of Shane Warne, expressed as ‘bowling, Warnie’. Notable too was his attitude to injuries; despite breaking all of his fingers during his thirteen-year career he only ever missed one Test match, replaced by Phil Emery in Pakistan.

Healy twice captained an Australian XI, in tour matches against the West Indians in 1991-92 and 1992-93. In 1993, he led an official Australian team at the Hong Kong six-a-side tournament and replaced Allan Border as captain of Queensland in 1992-93. However, when Border retired at the end of the 1994 tour of South Africa, Healy was not seen as viable successor as Australian captain for two reasons. Firstly, only one wicket-keeper had led Australia in the previous one hundred years.[1] Secondly, his various on-field confrontations were sometimes held against him.[2]

Australia made the much-debated decision to separate the teams for playing Tests and ODIs for the 1997-98 season. This affected Healy and the captain, Mark Taylor, both of whom were dropped from the ODI team.[5] Sri Lanka won the 1996 World Cup utilising a strategy of ultra-aggressive opening batsmen hitting as many runs as possible in the early overs of the innings. Adam Gilchrist, a wicket-keeper himself, had displayed the potential to play this type of game since his ODI debut the previous year. Gilchrist then became the ODI team’s wicket-keeper as well, allowing Australia to play an extra specialist (bowler or batsman) in the batting place previously occupied by Healy. Both Healy and Taylor made their disappointment with the decision known. However, Gilchrist hit a brilliant century during the finals of the Carlton and United Series, which Australia won after failing to qualify for the previous season.[5] Healy finished his ODI career with a world record 233 dismissals, a mark since overtaken by Gilchrist, Mark Boucher, Moin Khan, Kumar Sangakkara and M.S.Dhoni.[6]

Healy maintained his Test place, beginning the season with scores of 68 at Brisbane and 85 at Perth against New Zealand. His only other innings of substance was 46 not out against South Africa in the second Test at Sydney. On the subsequent tour of India, Healy top-scored with 90 in the first Test at Chennai, which Australia lost.

On 4 October 1998, Healy broke Rod Marsh‘s world record of 355 dismissals when he caught Wasim Akram from the bowling of Colin Miller, during the first Test against Pakistan at Rawalpindi. It was his 104th Test compared with Marsh’s 96 Tests.[7] Healy ended with 395 dismissals from 119 Tests. This tally was subsequently overtaken by South African wicketkeeper Mark Boucher (in his 103rd test, 16 fewer than Healy) and other Australian wicketkeeper Adam Gilchrist in his 96th Test which was his last. Boucher is currently the world record holder.

Healy also jointly holds the record in Test cricket (along with Mark Taylor) of being the only cricketers to have been run out in both innings of a Test on two occasions.[8]

After four months off, the Australian team toured Sri Lanka in August and September 1999. In the three Tests, Healy made only 25 runs and took four catches. The team made a brief visit to Zimbabwe the following month, to play the inaugural Test between the two nations, at Harare. Healy made five and took two catches.

During the lead-up to the 1999-2000 season, the selectors made it clear that they wanted Adam Gilchrist to keep for the Test team as well as the ODI side. Initially, Healy requested that he be allowed to play one more season and then retire, which was refused. He then asked to play the first Test, scheduled for his home ground at Brisbane, as a farewell. This, too, was refused, so he announced his immediate retirement from all forms of the game in a statement released on 28 October 1999.[9] In response to the tremendous public farewells afforded to Shane Warne, Glenn McGrath and Justin Langer at the end of the fifth Test at Sydney in 2006-07, Healy called for long-standing players to have their farewells to the game managed more appropriately than his own.[10]

Healy’s performances were acknowledged when he was selected as the wicketkeeper in the Australian Cricket Board‘s team of the 20th century, ahead of greats such as Rod Marsh, Wally Grout and Don Tallon. He was also recognised as a Wisden Cricketer of the Year in 1994. He also embarked on a career presenting sport on the top-rating Nine News Queensland; he initially presented on weeknights in 2007 and 2008, before moving to weekends from 2009 until 2016, after regular weeknight sports presenter Wally Lewis made a full recovery from epilepsy. He has also coached the Somerville House cricket team. Since 1999, Healy has been a cricket commentator. He was inducted into the Sport Australia Hall of Fame in 2004[11] and the Australian Cricket Hall of Fame in 2008.Healy now owns a car wash business in Brisbane called Hoppy’s which prides itself in its capacity to wash 50+ cars per hour by hand at their full service sites and more at their express exterior carwash venues. Their sites now number 10 in SEQld, Australia.

Healy has two brothers and a sister; Ken, Greg and Kim. Ken played a single Sheffield Shield game for Queensland in 1990 and a single List-A game in 1991. He is married to Helen and has two daughters Emma and Laura, and a son, Tom.[12] His niece Alyssa Healy wicket-keeps for the Australia women’s national cricket team, the Southern Stars.[13][14] Alyssa married her childhood friend, Australian fast bowler Mitchell Starc in April 2016, making him Ian’s nephew-in-law.