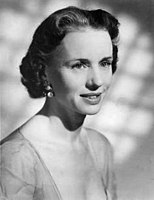 Jessica Tandy (born Jessie Alice Tandy; June 7, 1909 September 11, 1994) was a British stage and film actress. She appeared in over 100 stage productions and had more than 60 roles in film and TV.