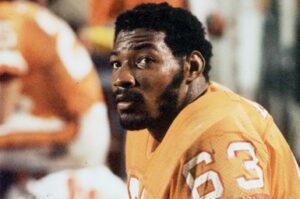 Lee Roy Selmon (October 20, 1954 – September 4, 2011) was an American professional football player and a college athletics administrator. He played college football as a defensive tackle at the University of Oklahoma, the youngest of three brothers to play football there.

Selmon was selected by the expansion Tampa Bay Buccaneers as the first overall pick in the 1976 NFL draft. He played in the National Football League (NFL) for nine seasons, from 1976 to 1984, all with the Buccaneers.

Selmon was the youngest of nine children of Lucious and Jessie Selmon, raised on a farm near Eufaula, Oklahoma. A National Honor Society member at Eufaula High School, he graduated in 1972 after playing football through high school. His two brothers also played football and went to the University of Oklahoma, which he attended and where he graduated.

In 1972, Selmon joined his brothers Lucious and Dewey Selmon in playing on the defensive line at the University of Oklahoma. He blossomed into a star in 1974, anchoring one of the best defenses in Oklahoma Sooners football history. The Sooners were national champions in 1974 and 1975. Selmon won the Lombardi Award and the Outland Trophy in 1975. Oklahoma head coach Barry Switzer called him the best player he ever coached, and College Football News placed him as the 21st-best college player of all time.

Selmon was known as “The Gentle Giant.” In the fall of 1999, Selmon was named to the Sports Illustrated ‘NCAA Football All-Century Team.’

Selmon was named a consensus All-American in 1974 and 1975 by Newspaper Enterprise Association. His list of achievements include the National Football Foundation Scholar-Athlete, GTE/CoSIDA Academic All-American, and Graduate Fellowship Winner National Football Foundation and Hall of Fame. The 1996 Walter Camp “Alumnus of the Year” was voted to the Oklahoma Sports Hall of Fame  in 1992.

In 1976, Selmon was the first player picked in the NFL draft, the first-ever pick for the expansion Tampa Bay Buccaneers. He joined older brother, Dewey, who was a second-round pick of the Bucs. In his first year, Selmon won the team’s ‘Rookie of the Year’ and MVP awards. Selmon played in six straight Pro Bowls and was named NFL Defensive Player of the Year in 1979. Buccaneer assistant Abe Gibron said, “Selmon has no peers” at defensive end, while former Detroit Lions coach Monte Clark compared him to “a grown man at work among a bunch of boys”.

A back injury forced him to leave at the end of the 1984 season; the Bucs retired his number, 63, in 1986. He was elected to the Florida Sports Hall of Fame. In January 2008, Selmon was voted by a panel of former NFL players and coaches to Pro Football Weekly ‘s All-Time 3-4 defensive team along with Harry Carson, Curley Culp, Randy Gradishar, Howie Long, Lawrence Taylor and Andre Tippett. He was the first player to be inducted into the Tampa Bay Buccaneers’ Ring of Honor on November 8, 2009.

Selmon stayed in Tampa, Florida, working as a bank executive and being active in many charities.

From 1993 to 2001, Selmon served as an assistant athletic director at the University of South Florida under Paul Griffin. After Griffin was forced to resign, Selmon was promoted to take over the athletic department. As the USF Athletic Director, Selmon launched the football program, spearheaded the construction of a new athletic facility, and led the university’s move into Conference USA, and into the Big East Conference.

Citing health issues, Selmon resigned as the USF Athletic Director in 2004. He took the role as president of the USF Foundation Partnership for Athletics, an athletics fund-raising organization.

Selmon suffered a massive stroke on September 2, 2011, which left him hospitalized in extremely critical condition. His restaurant initially released a statement announcing his death; however, this was later confirmed to be false. In fact, at one point his condition was said to be improving.

On September 4, 2011, Selmon died at the age of 56 from complications of the stroke. Visitation was scheduled for the following Thursday at the Exciting Central Tampa Baptist Church. The funeral was held the next day at Idlewild Baptist Church. Former teammates, the current Buccaneer team, the USF football team, other members of the NFL, and the general public attended. The USF football team wore a #63 decal on their helmets for the 2011 season, as did the Tampa Bay Buccaneers. Both teams conducted a ceremony to honor Selmon the weekend following his death.