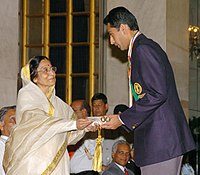 Sandhu was educated at the Lawrence School, Sanawar.[2]

He belongs to the village Ratta Khera Punjab Singh Wala in the district of Firozpur, Punjab. His father is Gurbir Singh and his uncles are Randhir Singh and Parambir Singh.[3]

He won the gold medal at the 2006 ISSF World Shooting Championships, becoming the first Indian shotgun shooter to be crowned World Champion.[4]

He has won six gold medals at the Asian Clay Shooting Championships.

In 2010, he won the Commonwealth Shooting Championship gold and the very next week won gold at the World Cup 2010 in Mexico.[4]

His career in shooting started early and his interest developed mainly due to his father Gurbir Singh Sandhu who is an Olympian and Arjuna Awardee. His education is from the Lawrence School Sanawar. He further has studied at the YPS Chandigarh, DPS New Delhi and the Venkateswara College, Delhi University.

He was awarded Rajiv Gandhi Khel Ratna award for 2006-2007, Indian’s highest honour given for achievements in sports.[6]

Sandhu comopeted at the Rio 2016 Summer Olympics, where he finished at 16th place in the men’s trap qualification round.[7]