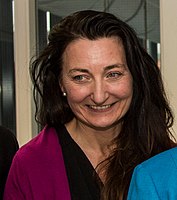 May-Britt Moser (born 4 January 1963) is a Norwegian psychologist , neuroscientist, and head of department of the Centre for Neural Computation at the Norwegian University of Science and Technology (NTNU). She and her then-husband, Edvard Moser, pioneered research on the brain’s mechanism for representing space together with their mentor John O’Keefe. The Mosers discovered types of cells that are important for determining position (spatial representation) close to the hippocampus, an area deep in the brain that is important for encoding of space, and also for episodic memory. Moser investigated correlations between the anatomical structure of the hippocampus and social learning in rats. Moser’s work gave the ability for scientists to gain new knowledge into the cognitive processes and spacial deficits associated with human neurological conditions such as Alzheimer’s disease.

May-Britt and Edvard Moser shared half of the 2014 Nobel Prize in Physiology or Medicine, awarded for work concerning the grid cells in the entorhinal cortex, as well as several additional space-representing cell types in the same circuit that make up the positioning system in the brain. The other half of the prize was awarded to John O’Keefe. The Mosers were 1 of 5 couples to be awarded a Nobel Prize.

May-Britt was born in Fosnavg, Mre and Romsdal, Norway in 1963. She and her husband attended the same high school, but didn’t know each other that well before they ended up at the same university. Moser’s favorite subjects in high school were mathematics and physics. They agreed that they should study psychology together and work together and their relationship went from there. They married in 1985 and have two daughters together. They announced that they are divorcing in 2016.

The Mosers returned to Norway in 1996 where May-Britt was appointed associate professor in biological psychology at the Norwegian University of Science and Technology (NTNU) in Trondheim. She was promoted to a position as full professor of neuroscience at NTNU in 2000. The couple were instrumental in the establishment of the Centre for the Biology of Memory (CBM) in 2002 and the Institute for Systems Neuroscience at NTNU in 2007. Moser is also head of department of the NTNU Centre for Neural Computation. She also is a member of the Royal Norwegian Society of Sciences and Letters,Norwegian Academy of Science and Letters, and the Norwegian Academy of Technological Sciences.

May-Britt Moser was a co-Founder of the Centre for the Biology of Memory, a Research Council-funded Centre of Excellence from 2003 to 2012, and has taken on the Directorship of the Centre for Neural Computation, with a life time from 2013 to 2022.