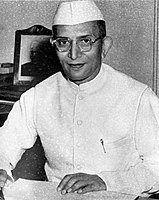 On the international scene, Desai holds international fame for his peace activism and created efforts to initiate peace between two rival South Asian states, Pakistan and India[citation needed]. After India’s first nuclear test in 1974, Desai helped restore friendly relations with China and Pakistan, and vowed to avoid armed conflict such as Indo-Pakistani war of 1971. He was honoured with the highest civilian award of Pakistan, the Nishan-e-Pakistan on 19 May 1990.

He is the oldest person to hold the office of prime minister, at the age of 84, in the history of Indian politics. He subsequently retired from all political posts, but continued to campaign for the Janata Party in 1980. He was conferred with India’s highest civilian honour, the Bharat Ratna. He died in 1995, at the age of 99.

Morarji Desai was of Gujarati origin. He was born in Bhadeli village, Bulsar district, Bombay Presidency, British India (present-day Valsad district, Gujarat, India) on 29 February 1896, the oldest of eight children. His father was a school teacher.

Desai underwent his primary schooling in The Kundla School (now called J.V. Modi school), Savarkundla and later joined Bai Ava Bai High School, Valsad. After graduating from Wilson College, Mumbai, he joined the civil service in Gujarat. Desai resigned as deputy collector of Godhra in May 1930 after being found guilty of going soft on Hindus during the riots of 1927-28 there.

Desai then joined the freedom struggle under Mahatma Gandhi and joined the civil disobedience movement against British rule in India. He spent many years in jail during the freedom struggle and owing to his sharp leadership skills and tough spirit, he became a favourite amongst freedom-fighters and an important leader of the Indian National Congress in the Gujarat region. When provincial elections were held in 1934 and 1937, Desai was elected and served as the Revenue Minister and Home Minister of the Bombay Presidency.

Chief Minister of Bombay and Partition of two state 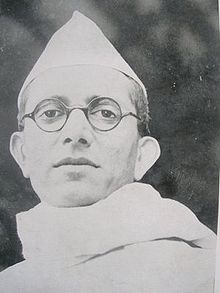 Morarji Desai in 1937, as Congress Home Minister of Bombay Presidency

Before the independence of India, he became Bombay’s Home Minister and later was elected as Chief Minister of Bombay State in 1952. The state was a bi-lingual state, home to Gujarati-speaking and Marathi-speaking people. Since 1956, activist organisation Samyukta Maharashtra Samiti led a movement for a Marathi-only speaking state of Maharashtra. Morarji Desai was opposed to such movements, including the Mahagujarat Movement led by Indulal Yagnik demanding a new state of Gujarat. Desai proposed that the metropolitan Mumbai (as coined by earlier Koli inhabitants), be made into a union territory or a separate development region to suit its cosmopolitan nature, due to its long-settled citizens from diverse settings across various linguistic, cultural, and religious backgrounds spanning several generations. In opposition to his alleged Gandhian thoughts, Desai ordered police to fire on demonstrators of the Mumbai-unit of Samyukta Maharashtra Samiti at Flora Fountain who had gathered there to demonstrate against government. The protesters were led by Senapati Bapat. Desai ordered “shoot-at-sight” which killed 105 protesters including an eleven-year-old girl during the incident. This escalated the issue and is believed to have forced the Central Government to agree to two separate states based on language. After the formation of the present State of Maharashtra, Bombay, now Mumbai became its state capital. Flora Fountain was renamed “Hutatma Chowk” (“Martyrs’ Square” in Marathi) to honour the 105 people killed in the firing. Later Desai moved to Delhi when he was inducted as finance Minister in the cabinet of Prime Minister Jawaharlal Nehru.

Rising in Congress leadership, as a fierce nationalist with anti-corruption leanings, Desai was at odds with Prime Minister Nehru and his allies, and with Nehru’s age and health failing, he was considered as a possible contender for the position of Prime Minister.

In 1964 after prime minister’s Nehru’s death, Desai was outflanked in the leadership contest by the Nehru’s protege, Lal Bahadur Shastri. Desai was invited but did not join the short lived Shastri cabinet.In early 1966, the unexpected passing away of Prime Minister Lal Bahadur Shastri after only 18 months in power made Morarji Desai once again a contender for the top position. However, he was defeated by Nehru’s daughter, Indira Gandhi, in the Congress party leadership election by a bigmargin.

Desai served as Deputy Prime Minister and Finance Minister of India in the Indira Gandhi government until July 1969 when Prime Minister Gandhi took the finance portfolio from him but asked him to serve as the deputy prime minister. However, to save his self-respect act, Desai tendered his resignation from the Gandhi cabinet. At the same time, Gandhi also nationalised the fourteen largest banks in India.

When the Congress party split in 1969, Morarji joined the Indian National Congress (Organisation) faction of the party, whereas Indira Gandhi formed a new faction called Indian National Congress (Ruling). Alternatively, the two factions of Desai and Indira were called Syndicate and Indicate respectively. The 1971 general elections to the Indian parliament were won by Indira Gandhi’s faction in a landslide. Morarji Desai, however, was elected as a member of the Lok Sabha or lower house of Parliament. Morarji Desai went on indefinite hunger strike on 12 March 1975 to support Nav Nirman movement of Gujarat.

In 1975, Indira Gandhi was convicted of electoral fraud by the Allahabad High Court, after opponents alleged she had used government civil servants and equipment during the campaign for the 1971 General Elections. During the subsequent Emergency rule in 1975-77, in a massive crackdown, Desai and other opposition leaders were jailed by the Indira Gandhi government.

The popular anti-corruption movement led by Jayaprakash Narayan and the Janata-wave in 1977 led to the complete routing of the Congress party in Northern India, and a landslide victory for the opposition Janata alliance in the National elections held in March 1977. Morarji Desai was selected by the Janata alliance, later Janata Party as their parliamentary leader, and thus became the first non-Congress Prime Minister of India. 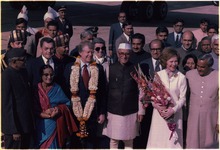 Morarji Desai (third from right, front row) with US President Jimmy Carter during his January 1978 visit to India

Desai with Romanian President Nicolae Ceauescu in Delhi in May 1978. 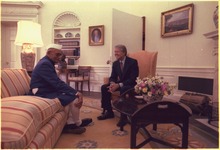 Desai and Carter in the Oval Office in June 1978. 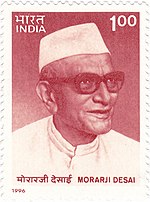 First term as a Prime Minister

In January 1977,Indira Gandhi dissolved the Lok sabha and declared elections to the body to be held during March 1977. Opposition leaders were also released and promptly formed the Janata alliance to fight the elections. The alliance registered a landslide victory in the election. On the urging of Jayaprakash Narayan, the Janata alliance selected Desai as their parliamentary leader and thus the Prime Minister.

Desai restored normal relations with China, for the first time since the 1962 war. He also communicated with the military ruler of Pakistan, General Zia-ul-Haq and established friendly relations.Despite his pacifist leanings, he refused to sign the non-nuclear proliferation treaty despite the threat of stopping supply of uranium for power plants by the USA Congress.

Since India’s first nuclear test in 1974, Desai kept India’s nuclear reactors stating “they will never be used for atomic bombs, and I will see to it if I can help it”. In 1977, the Carter administration offered to sell heavy water and uranium to India for its nuclear reactors but required American on-site inspection of nuclear materials. Desai declined, seeing the American stance as contradictory, in light of its own nuclear arsenal.Domestically, he played a crucial role in the Indian nuclear program after it was targeted by major nuclear powers after conducting a surprise test in 1974.

Morarji Desai had described the Research and Analysis Wing (R&AW), India’s external intelligence agency, as the praetorian guard of Indira Gandhi and had promised to stop all activities of the R&AW after becoming prime minister. He closed down much of the agency, and reduced its budget and operations, such as closing its Information Division. B. Raman, the former head of the Counter-Terrorism Division of R&AW and noted security analyst, reveals that, in an informal discussion, Morarji Desai indiscreetly told Pakistan’s Chief Martial Law Administrator General Zia ul-Haq that his government was well aware of Pakistan’s nuclear development.

His government undid many amendments made to the constitution during emergency and made it more difficult for any future government to impose a national emergency. However, the Janata Party coalition was full of personal and policy friction and thus failed to achieve much, owing to continuous in-wrangling and much controversy. With no party in leadership of the coalition, rival groups vied to unseat Desai. Controversial trials of prominent Congress leaders, including Indira Gandhi over Emergency-era abuses worsened the fortunes of his administration.In 1979, Raj Narain and Charan Singh pulled out of the Janata Party, forcing Desai to resign from office and retire from politics. The chief reason for the collapse was the demand by the duo and other left-leaning members, like Madhu Limaye, Krishan Kant, and George Fernandes that no member of the Janata party could simultaneously be a member of an alternative social or political organisation. This attack on “dual membership” was directed specifically at members of the Janata party who had been members of the Jan Sangh, and continued to be members of Rashtriya Swayamsevak Sangh, the Jan Sangh’s ideological parent.

Morarji Desai campaigned for the Janata Party in 1980 General Election as a senior politician but did not contest the election himself. In retirement, he lived in Mumbai and died on 10 April 1995 at the age of 99. From 13 December 1994, when former French Prime Minister Antoine Pinay died until his own death, Desai was the world’s oldest living former head of government. He was much honoured in his last years as a freedom-fighter of his generation.

Morarji Desai was a strict follower of Mahatma Gandhi’s principles and a moralist. He was a vegetarian “both by birth and by conviction.”

Morarji Desai was a Gandhian follower, social worker, institution builder and a great reformer. He was the Chancellor of Gujarat Vidyapith. Even during his term as the Prime Minister he used to visit and stay at Vidyapith during the month of October. He lived simply and used to write post cards himself even when he held the office of Prime Minister. Sardar Patel deputed him to conduct meetings of farmers in Kaira district which finally led to the establishment of the Amul Cooperative movement. During his rule, he withdrew intervention in Public Distribution System and rationing shops were literally lost due to cheap sugar and oil available in the market.

Morarji Desai married Gujraben in 1911, at the age of 15. Gujraben lived to see her husband becoming Prime Minister, but she predeceased him. He has a son, Kanti Desai, and grandsons Jagdeep and Bharat Desai. Madhukeshwar Desai, one of his great-grandsons, son of Jagdeep Desai, took it upon himself to revive the legacy of his illustrious great grandfather.Madhukeshwar Desai is currently the National Vice-President of the Bharatiya Janata Yuva Morcha, the youth wing of the BJP. Vishaal Desai, son of Bharat Desai, is a writer and filmmaker.

In 1978, Desai, a longtime practitioner of “urine therapy,” spoke to Dan Rather on 60 Minutes about the benefits of drinking urine. Desai stated that urine therapy was the perfect medical solution for the millions of Indians who cannot afford medical treatment. He also attributed his longevity to drinking urine – which he called “the water of life”.