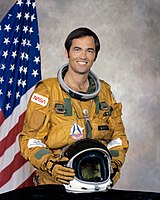 Robert Laurel Crippen (born September 11, 1937) is an American retired naval officer and aviator, test pilot, aerospace engineer, and retired astronaut. He traveled into space four times: as Pilot of STS-1 in April 1981, the first Space Shuttle mission; and as Commander of STS-7 in June 1983, STS-41-C in April 1984, and STS-41-G in October 1984. Crippen received the Congressional Space Medal of Honor.

Crippen actively participated in the recovery operations for the remains of crew members after the Space Shuttle Challenger disaster.[1]

Crippen was born September 11, 1937, in Beaumont, Texas.[2] After graduating from New Caney High School in New Caney, Texas in 1955, Crippen received a Bachelor of Science degree in Aerospace Engineering from the University of Texas at Austin in 1960.[2][3][4] He was selected as a member of the Texas Alpha chapter of Tau Beta Pi and Sigma Gamma Tau.[5]

Crippen was commissioned through the United States Navy‘s Aviation Officer Candidate School (AOCS) Program at Naval Air Station Pensacola, Florida.[2] He continued his flight training at Naval Air Station Whiting Field, Florida, and went from there to Naval Air Station Chase Field in Beeville, Texas, where he received his wings. As a Naval Aviator from June 1962 to November 1964, he made two deployments aboard the aircraft carrier USS Independence, flying the A-4 Skyhawk in Attack Squadron 72 (VA-72). He later attended the U.S. Air Force Aerospace Research Pilot School at Edwards Air Force Base, California. Upon graduation he remained at Edwards as an instructor until he was picked for the USAF Manned Orbiting Laboratory (MOL) spaceflight program in October 1966.[2]

Crippen with a MOL spacesuit

After the MOL program was cancelled, Crippen became a NASA astronaut in September 1969.[2] He served on the astronaut support crew for the Skylab 2, Skylab 3, and Skylab 4 missions, and for the Apollo-Soyuz Test Project mission.[2] He was the Pilot of the first orbital test flight of the Space Shuttle program (STS-1, April 12–14, 1981) and was the Commander of three additional Shuttle flights: STS-7, June 18–24, 1983; STS-41-C, April 6–13, 1984; and STS-41-G, October 6–13, 1984. In addition to participating in the first Shuttle flight, he also presided over the first five-person crew (STS-7, which included Sally Ride, the first American woman in space), the first satellite repair operation (STS-41-C, which repaired the Solar Maximum Mission satellite), and the first seven-person crew (STS-41-G). He was named Commander of the STS-62-A mission which would have launched from the new SLC-6 facility at Vandenberg Air Force Base, California. That mission was cancelled after the Space Shuttle Challenger disaster and SLC-6 was closed when the Air Force went back to launching satellites on the Titan III and Titan IV rockets.

Crippen was stationed at Kennedy Space Center, Florida, from July 1987 to December 1989, as Deputy Director, Shuttle Operations for NASA Headquarters. He was responsible for final Shuttle preparation, mission execution and return of the orbiter to KSC after landings at Edwards Air Force Base. From January 1990 to January 1992, he served as Director, Space Shuttle, at NASA Headquarters in Washington, D.C. As such, he was responsible for the overall Shuttle program requirements, performance, and total program control, including budget, schedule and program content. He subsequently served as the Director of the Kennedy Space Center from January 1992 to January 1995. John Young and Crippen suiting up for the STS-1 mission

STS-7: Challenger (June 18-24, 1983) was the second flight for the Orbiter Challenger. This was also the first mission with a five-person crew. During the six-day flight, the crew deployed satellites for Canada (ANIK C-2) and Indonesia (PALAPA B-1); operated the Canadian-built Remote Manipulator System (RMS) to perform the first deployment and retrieval exercise with the Shuttle Pallet Satellite (SPAS-01); conducted the first formation flying of the orbiter with a free-flying satellite (SPAS-02); carried and operated the first U.S./German cooperative materials science payload (OSTA-2); and operated the Continuous Flow Electrophoresis System (CFES) and the Monodisperse Latex Reactor (MLR) experiments, in addition to activating seven Getaway Specials. Mission duration was 146 hours, 23 minutes, 59 seconds.

STS-41-G: Challenger (October 5-13, 1984) was the first mission with a seven-person crew. During the eight-day flight, the crew deployed the Earth Radiation Budget Satellite, conducted scientific observations of the Earth with the OSTA-3 pallet and Large Format Camera, and demonstrated potential satellite refueling with an EVA and associated hydrazine transfer. Mission duration was 8 days, 5 hours, 23 minutes, 33 seconds and concluded with a landing at Kennedy Space Center, Florida.[9]

After leaving NASA, Crippen served as a Vice President with Lockheed Martin Information Systems in Orlando, Florida, from April 1995 to November 1996. From December 1996 to April 2001, Crippen was President of Thiokol Propulsion, which produced the Space Shuttle Reusable Solid Rocket Motors and other defense and commercial solid rocket motors.[10]

He also received NASA Outstanding Leadership Medal in 1988, four NASA Space Flight Medals in 1981, 1983 and twice in 1984, and three NASA Distinguished Service Medals in 1985, 1988, and 1993. In 1996, Crippen became the tenth individual to receive the Rotary National Award for Space Achievement’s National Space Trophy. He was inducted into the International Space Hall of Fame in 1991 and the U.S. Astronaut Hall of Fame in 2001.[6][15] On April 6, 2006, he received the Congressional Space Medal of Honor, the highest award for spaceflight achievement.[16]

On November 18, 2015 at the National Business Aviation Association convention in Las Vegas, Crippen was announced as a 2016 Inductee into the National Aviation Hall of Fame.[17]