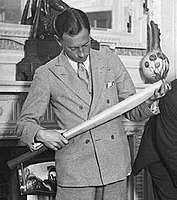 Blunt was born in England, but his family moved to New Zealand when he was six months old. His father, a graduate of Christ Church, Oxford, was a professor at Canterbury College in Christchurch. Blunt was educated at Christ’s College, Christchurch, where he captained the First XI cricket team.

A batsman and leg-spinner, Blunt began his first-class career at 17 on Christmas Day 1917 for Otago against Canterbury at Christchurch, taking six wickets. He was a prolific batsman in domestic cricket throughout the 1920s, playing several representative matches for New Zealand against Australian and English teams in the days before New Zealand played Test cricket. When New Zealand made its first major overseas tour, to England in 1927, he scored 1540 runs at 44.00 and took 77 wickets at 25.29, and in recognition of these performances he was chosen as one of the Wisden Cricketers of the Year in 1928.

Batting for Otago against Canterbury in Christchurch in 1931-32, he made 338 not out at a run a minute out of a total of 589 all out, in a match that Otago nevertheless lost. It was the highest first-class score by a New Zealander until Bert Sutcliffe beat it with 355 in 1949-50. Blunt’s best first-class bowling figures were 8 for 99 for Otago against Auckland in Dunedin in 1930-31.

After the 1931-32 season he played no further cricket in New Zealand, but did appear in three minor first-class matches in England in 1934 and 1935.

After retiring from first-class cricket, Blunt became a radio commentator on cricket broadcasts, joining the BBC team for the 1949 New Zealand tour of England and was a successful businessman. He was awarded the MBE in 1965.