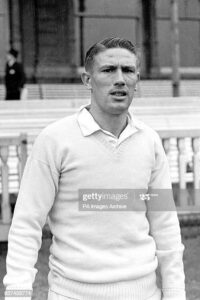 Roly Jenkins (sometimes spelt Roley) (24 November 1918 – 22 July 1995) was an English cricketer , almost exclusively for Worcestershire as a leg spinner in the period immediately after World War II. Along with Doug Wright and Eric Hollies, Jenkins was a star of the last generation of English leg-spinners before a more defensive mindset, followed by the advent of one-day cricket, all but killed off home grown wrist spinners.

Cricket writer, Colin Bateman, noted, “true to the leg-spinner’s image, Roly Jenkins was one of the game’s great characters and entertainers whose performances ebbed and flowed with how the mood took him. in an era when wrist-spinners flourished, Roly was one of the bigger spinners of the ball, if not always the most accurate”.

Roland Oliver Jenkins was born in Rainbow Hill, Worcester in 1918. He first played for Worcestershire as a teenager in 1938, and established himself as a regular member of the team almost immediately. He was carefully nursed in his first three seasons – separated by six years with no county matches due to World War II – but some of his performances already showed he was potentially a leg-spinner of more than ordinary ability. Although he had not reached a half century before the war, 1947 saw him come rapidly to the front as a gutsy middle-order batsman with a full range of leg-side strokes, and the following year he continued this advance as a batsman and, as a bowler, improved so much that he was chosen for the tour to South Africa.

Although he did not do much in the Tests, Jenkins’ vicious spin was deadly against slower-footed batsmen on hard South African pitches. Initially an orthodox leg break bowler, around this time Jenkins shifted to a grip akin to a seam bowler, which allowed him such a firm and close grip on the ball. This spin was so strong that it compensated for his lack of a top-spinner, and the fact that his googly was extremely easy to pick. Although he had neither the quick pace of Wright, or the artfulness of Hollies, Jenkins’ spin and flight were so pronounced he surpassed both in the dry summer of 1949. Despite not playing a Test match, he took more wickets that season than any other bowler, and claimed a hat-trick in each innings against Surrey. This did not affect his batting: indeed, Jenkins reach 1,000 runs for the third successive year and was named one of the Cricketers of the Year by Wisden.

The following year, saw Jenkins play in two Tests against the West Indies. In the first, he took nine wickets, but conceded almost 300 runs. Jenkins was probably the only English spinner who might have spun the ball appreciably on the cast-iron Australian wickets of previous years, a shift to a wetter climate meant he was not considered. His all-round work continued to be valuable for Worcestershire up to 1952, when he did the double for the second time, and played in two Tests against India with some success.

In his benefit year of 1953, Jenkins began superbly as a bowler but not only lost form with the bat so much he averaged under ten an innings, but also suffered a serious injury that caused him to miss half the season, and his actual benefit match against Leicestershire. 1954’s very soft pitches were unsuited to him both with bat and ball. However, after another injury in 1955, Jenkins returned to something like his best late that year, whilst in 1956 he took 101 wickets at a better average than ever before, and frequently captained his county, he was established as an enthusiastic “senior professional” even though out of the running for higher representative honours. Apart from one match where he took eleven wickets, however, Jenkins’ skill deserted him in 1957, and he played only a few games in 1958 before his engagement was not renewed. Nonetheless, after retiring from first-class cricket, Jenkins played for fifteen years with West Bromwich Dartmouth in the Birmingham and District League, in the process establishing a reputation beyond that which he had as a county player.

Along with Derbyshire wicket-keepers Bob Taylor and George Dawkes, Jenkins is one of only three players who have reached ten thousand career runs, while making only one century (against Nottinghamshire in 1948). Tony Lock reached that figure with a highest score of 89.

Throughout his career, Jenkins was noted for his obsessive perfectionism: he would typically begin practising bowling at seven o’clock in the morning, and he was known for always bowling in his cap (though he batted without one).