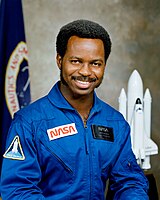 Ronald Erwin McNair (October 21, 1950 – January 28, 1986) was an American NASA astronaut and physicist. He died during the launch of the Space Shuttle Challenger on mission STS-51-L, in which he was serving as one of three mission specialists in a crew of seven.

In 1976, he received a Ph.D. degree in Physics from the Massachusetts Institute of Technology under the guidance of Michael Feld, becoming nationally recognized for his work in the field of laser physics.

In 1978, McNair was selected as one of thirty-five applicants from a pool of ten thousand for the NASA astronaut program. He flew on STS-41-B aboard Challenger from February 3 to February 11, 1984, as a mission specialist becoming the second African American and the first Bah’ to fly in space.

Following this mission, McNair was selected for STS-51-L, which launched on January 28, 1986, and was subsequently killed when Challenger disintegrated nine miles above the Atlantic Ocean 73 seconds after liftoff.[1]

After graduation from MIT (receiving four honorary doctorates, a score of fellowships and commendations while achieving a 6th degree black belt in taekwondo), he became a staff physicist at the Hughes Research Lab in Malibu, California. McNair was a member of the Bah’ Faith.[3]

He was survived by his wife, Cheryl, daughter Joy Charey McNair and son Reginald Ervin McNair. McNair was a member of the Omega Psi Phi Fraternity.[2] He was buried at the Rest Lawn Memorial Park in Lake City, South Carolina.

Born October 21, 1950, in Lake City, South Carolina, his parents were Pearl M. and Carl C. McNair. He had two brothers, Carl S. and Eric A. McNair.In the summer of 1959, he refused to leave the segregated Lake City Public Library without being allowed to check out his books. After the police and his mother were called, he was allowed to borrow books from the library, which is now named after him.[4] A children’s book, Ron’s Big Mission, offers a fictionalized account of this event. His brother, Carl S., also wrote the official biography, In the Spirit of Ronald E. McNairAstronaut: An American Hero.

McNair graduated as valedictorian of Carver High School in 1967.[5] McNair was an accomplished saxophonist.

Before his last fateful space mission he had worked with the composer Jean-Michel Jarre on a piece of music for Jarre’s then-upcoming album Rendez-Vous. It was intended that he would record his saxophone solo on board the Challenger, which would have made McNair’s solo the first original piece of music to have been recorded in space[6] (although the song “Jingle Bells” had been played on a harmonica during an earlier Gemini 6 spaceflight). However, the recording was never made, as the flight ended in disaster and the deaths of its entire crew. The last of the Rendez-Vous pieces, “Last Rendez-Vous”, had the additional name “Ron’s Piece”. Ron McNair was supposed to take part in the concert through a live feed.

McNair was posthumously awarded the Congressional Space Medal of Honor in 2004, along with all crew members lost in the Challenger and Columbia disasters. A variety of public places, people and programs have been renamed in honor of McNair.