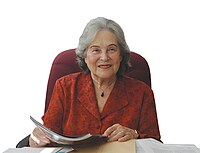 Ruth Arnon is an Israeli biochemist and codeveloper of the multiple sclerosis drug Copaxone. She is currently the Paul Ehrlich Professor of Immunology at the Weizmann Institute of Science, where she is researching anti-cancer and influenza vaccinations.

Arnon’s father, Alexander Rosenberg was interested in science from a young age. After serving in the Jewish Legion during World War I, Rosenberg attended Technische Hochschule in Vienna. He realized his own interest in electricity in 1929 and moved with his wife and two children to Toulouse to complete studies in electrical engineering as well as earn a master’s in mathematics. Rosenberg then returned to Palestine and worked for the Electrical Corporation until the mid 1960s. Ruth Arnon attributes her own love for science to her relationship with her father.

Ruth Rosenberg was born in Tel Aviv, June 1, 1933. Because her older siblings had already taught Ruth basic reading and arithmetic, she started school in the second grade. When she finished elementary school, her mother realized her potential and convinced Barukh Ben-Yehuda (1894-1990) to allow her to attend high school at the Herzliya Hebrew Gymnasium. Along with many in the youth movement, Ruth wished to join the military. Being too young, she studied chemistry at the Hebrew University of Jerusalem and joined the IDF special academic study program allowing her to study and spend summers doing military training. Arnon earned her master’s degree in 1955, and served for two years as an officer in the IDF. During her time in the military, she married Uriel Arnon, an engineer at the Technion in Haifa. Ruth and Uriel Arnon had two children: Michal (b. 1957) and Yoram (b. 1961)

Career as a Scientist

Ruth Arnon joined the Weizmann Institute of Science in 1960. She has focused most of her life on the field of immunology. While at Weizmann, Arnon served as the Head of the Department of Chemical Immunology and as the Dean of the Faculty of Biology. In addition, Professor Arnon served as the Director of the Institute’s MacArthur Center for Molecular Biology of Tropical Diseases from 1958-94. Much of Arnon’s work has been in the development of vaccinations and cancer research. One of her largest contributions to science was working alongside Professor Michael Sela to develop a drug for multiple sclerosis called Copaxone.

Prof. Arnon has been involved in the publishing of more than four hundred articles and books in biochemistry and immunology, and has been the recipient of many prestigious awards throughout her career, most of which are listed in the Awards and Honors section below.

Prof. Arnon and Prof. Sela developed a new drug application for the treatment of multiple sclerosis called Copolymer 1. Its chemical name is glatiramer acetate. It was submitted by the TEVA Pharmaceutical Company to the FDA for approval, under the name of Copaxone, on June 14, 1995. Since multiple sclerosis is an immunological disease, Cop 1 is an immunospecific drug, which is no surprise, as Arnon has focused the majority of her work in the field of immunology. It specifically aids neuroprotection and generation as well as prevents the demyelination of axons, a hallmark of diseases such as multiple sclerosis. In fact, studies by Arnon et al. have shown an increase in myelination as a result of Cop 1. In a 2004 article, Arnon and Aharoni state that glatiramer acetate is “highly effective in the suppression of experimental autoimmune encephalomyelitis in various species.”

Prof. Arnon is currently performing research on a universal, recombinant influenza vaccination, as well as cancer vaccine research. In a 2009 paper, Arnon speaks of research using virus-like particles (VLP) to induce an immune response. These particles cannot replicate, but possess the specific antigen presenting proteins that immune cells use to identify viruses. Therefore, a vaccine could introduce VLPs to an individuals immune system and bring about the production of memory cells. Arnon and Ben-Yedidia hypothesize that these vaccines would be effective against H5N1, a pandemic virus more commonly known as bird flu. They have tested the various synthetic vaccinations on mice and observed a significant immune response. In addition, they have put human lymphocytes in mice and also observed an immune response. Their research formed the basis of the company BiondVax, who have taken the universal flu vaccine into human clinical trials.

In 2017 Prof. Arnon was appointed co-chair of the UK-Israel Science Council, alongside Prof. Lord Robert Winston. She has been a founding member of the council since 2010.