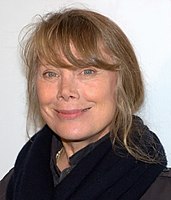 Mary Elizabeth “Sissy” Spacek (; born December 25, 1949) is an American actress and singer. She began her career in the early 1970s and first gained attention for her role in the film Badlands (1973). Her major breakthrough came in 1976 when she played the title character of Carrie White in Brian De Palma‘s horror film Carrie, based on the first novel by Stephen King, for which she earned an Oscar nomination (a rare feat for an actor or actress in a horror movie). She won the Academy Award for Best Actress for her portrayal of Loretta Lynn in the 1980 film Coal Miner’s Daughter, and also earned a Grammy nomination for the song “Coal Miner’s Daughter” from the film’s soundtrack. She went on to receive further Oscar nominations for her roles in Missing (1982), The River (1984) and Crimes of the Heart (1986). Coal Miner’s Daughter and Crimes of the Heart also won her the Golden Globe Award for Best Actress in a Musical or Comedy.

Spacek was born on December 25, 1949, in Quitman, Texas, the daughter of Virginia Frances (ne Spilman; December 18, 1917 November 10, 1981) and Edwin Arnold Spacek Sr. (July 3, 1910 January 7, 2001), a county agricultural agent. Her mother, who was of Polish, English and Irish descent, was from the Rio Grande Valley of Texas. At age 6, she performed on stage for the first time, appearing in a local talent show. Although her birth name was Mary Elizabeth, from birth, she was always called Sissy by her brothers which led to her stage name. She attended Quitman High School and was named homecoming queen at her senior prom.

Spacek was greatly affected by the death of her close eighteen-year-old brother, Robbie, in 1967 from leukemia when she was seventeen, which she has called “the defining event of my whole life.” Spacek used the personal tragedy as a tool to be fearless in her acting career: “I think it made me brave. Once you experience something like that, youve experienced the ultimate tragedy. And if you can continue, nothing else frightens you. Thats what I meant about it being rocket fuel I was fearless in a way. Maybe it gave more depth to my work because I had already experienced something profound and life-changing.”

1970s and beginning of acting career

Spacek worked for a time as a photographic model (represented by Ford Models) and as an extra at Andy Warhol‘s Factory. She appeared in a non-credited role in his film Trash (1970). With the help of her cousin, actor Rip Torn, she enrolled in Lee Strasberg‘s Actors Studio and then the Lee Strasberg Institute in New York. Her first credited role was in Prime Cut (1972), in which she played Poppy, a girl sold into sexual slavery. The role led to television work, which included a guest role in The Waltons, which she played twice in 1973. Spacek received international attention after starring in Terrence Malick‘s Badlands (1973), in which she played Holly, the film’s narrator and a 15-year-old girlfriend of mass-murderer Kit (Martin Sheen). Spacek has described Badlands as the “most incredible” experience of her career. On the set of Badlands, Spacek met art director Jack Fisk, whom she married in 1974.

Spacek’s iconic and career-defining role came in Brian De Palma‘s film Carrie (1976), in which she played Carietta “Carrie” White, a shy, troubled high school senior with telekinetic powers. Spacek had to work hard to persuade director de Palma to engage her for the role. After rubbing Vaseline into her hair and donning an old sailor dress her mother made for her as a child, Spacek turned up at the audition with the odds against her, but won the part. She was nominated for the Academy Award for Best Actress for her work in the film. Spacek had previously been the set dresser for DePalma’s film Phantom of the Paradise (1974).

After Carrie, Spacek played the small role of housekeeper Linda Murray in Alan Rudolph‘s ensemble piece Welcome to LA (1976) and cemented her reputation in independent cinema with her performance as Pinky Rose in Robert Altman‘s classic 3 Women (1977). Altman was deeply impressed by her performance, having stated: “She’s remarkable, one of the top actresses I’ve ever worked with. Her resources are like a deep well.” Brian de Palma added: ” a phantom. She has this mysterious way of slipping into a part, letting it take over her. She’s got a wider range than any young actress I know.” Spacek also helped finance then-brother-in-law David Lynch‘s directorial debut, Eraserhead (1977) and is thanked in the credits of the film.

Spacek began the 1980s with an Oscar in 1980 for Coal Miner’s Daughter (1980), in which she played country music star Loretta Lynn, who selected her for the role. In the film, both she and Beverly D’Angelo, who played Patsy Cline, performed their own singing. Film critic Roger Ebert has credited the movie’s success “to the performance by Sissy Spacek as Loretta Lynn. With the same sort of magical chemistry she’s shown before, when she played the high school kid in Carrie, Spacek at 29 has the ability to appear to be almost any age on screen. Here, she ages from about 14 to somewhere in her 30s, always looks the age, and never seems to be wearing makeup.” Spacek also was nominated for a Grammy Award for her singing on the film’s soundtrack album. She followed this with her own country album, Hangin’ Up My Heart (1983); the album spawned one hit single, “Lonely But Only For You”, a song written by K. T. Oslin, which reached No. 15 on the Billboard Country chart.

In the film Heart Beat (1980), Spacek played Carolyn Cassady, who slipped (under the influence of John Heard‘s Jack Kerouac and Nick Nolte‘s Neal Cassady) into a combination of drudgery and debauchery. Spacek was so adamant about getting the role, that she pored through over 4,000 pages of research to prepare for her character. Producer Ed Pressman and director John Byrum took her to dinner to advise her that she did not have the role. Spacek was so distraught at the news that she shattered a glass of wine in her hand. After that, Pressman walked up to Spacek with a piece of shattered glass and told her she had the role. He said that Spacek breaking the glass clinched the deal, and they believed she would ultimately best suit the part. The film was released on April 25, 1980 to mixed critical reviews.

Also in the 1980s, Spacek starred alongside Jack Lemmon in Constantin Costa-Gavras‘s political thriller Missing (1982, based on the book The Execution of Charles Horman) and appeared with Mel Gibson in the rural drama The River (1984), and with Diane Keaton and Jessica Lange in 1986’s Crimes of the Heart (1986). She was nominated for the Best Actress Oscar for all of these roles. Other performances of the decade included star turns in husband Jack Fisk‘s directorial debut Raggedy Man (1981) and alongside Anne Bancroft in the suicide-themed drama ‘night, Mother (1986). Spacek also showed her lighter side by voicing the brain in the Steve Martin comedy The Man with Two Brains (1983). She had a supporting role as the wife of Jim Garrison (played by Kevin Costner) in Oliver Stone‘s JFK (1991) and made a number of comedies, TV movies, and the occasional film. Most notable of her appearances during these years was her turn as the evil Verena Talbo in the ensemble piece The Grass Harp (1995), which reunited her with both Laurie and Lemmon, as well as a supporting performance, again alongside Nick Nolte, as the waitress Margie Fogg in Paul Schrader‘s father-son psychodrama Affliction (1997). She also played Rose Straight in David Lynch‘s The Straight Story (1999) and Brendan Fraser‘s character’s mother in Blast from the Past.

With her 6th best actress Academy Award nomination, Spacek became only the 8th actress to be nominated for at least 6 leading role Oscars. Spacek is the most recent inductee to this list.

Other performances of this decade include unfaithful wife Ruth in Rodrigo Garca‘s Nine Lives (2005) and a turn as a woman suffering from Alzheimer’s in the television movie Pictures of Hollis Woods (2007). In 2008, Spacek had a supporting part in the Christmas comedy Four Christmases and a lead role in the independent drama, Lake City. Spacek appeared on the HBO drama Big Love, for a multi-episode arc, as a powerful Washington, D.C. lobbyist.

In 2005, she narrated the audiobook of the original Carrie novel by Stephen King and, in 2006, she narrated the classic Harper Lee novel To Kill a Mockingbird (1960), which sold over 30 million copies. In 2011, she received a star on Hollywood’s Walk of Fame. Spacek was featured in The Help (2011), directed by Tate Taylor, and along with the cast, was awarded with the Screen Actors Guild Award for Outstanding Performance by a Cast in a Motion Picture for their performance in the film. In 2012, Spacek published a memoir, My Extraordinary Ordinary Life, with co-author Maryanne Vollers.The Washington Post‘s Jen Chaney called it “refreshingly down-to-earth” and “beautifully written”. She also mentioned that Spacek’s description of her childhood is so “evocative that one can almost taste the sour stalks of goatweed she chewed on steamy summer afternoons”. Jay Stafford of Richmond Times-Dispatch pointed out that, unlike other actors’ autobiographies, Spacek’s “benefits from good writing and remarkable frankness”.The Austin Chronicle‘s Margaret Moser stated that Spacek’s memoir is “as easy to read as it is a pleasure to digest”. Joe Muscolino of the Biographile gave the book a 5 out of 5 rating, saying that it “does not disappoint”.Kirkus Reviews, however, was less appreciative of the book, calling it “an average memoir” and “overly detailed”, while criticizing its lack of “narrative arc”, but complimented Spacek for being “truly down-to-earth”. It further criticized that “the book is ‘ordinary’ and does not have enough drama to engage readers not directly interested in Spacek and her work”, and ended by saying that it’s “for die-hard movie buffs and Spacek fans only”.

Spacek became the first person to appear as an actor in a film nominated for the Academy Award for Best Picture in each of the four most recent decades. Each film appeared at or near the beginning of its decade: Coal Miner’s Daughter (1980), Missing (1982), JFK (1991), In the Bedroom (2001), and The Help (2011).

Spacek married production designer and art director Jack Fisk in 1974, after they met on the set of Badlands. Fisk later directed her in the films Raggedy Man (1981) and Violets Are Blue (1986). They have two daughters, Schuyler Fisk (born July 8, 1982) and Madison Fisk (born September 21, 1988). Schuyler Fisk is both an actress and a singer. In 1982, Spacek and her family moved to a farm near Charlottesville, Virginia.

Despite Spacek’s lengthy career and recognition, she has managed to keep a low profile and is rarely a tabloid fixture. Various critics have praised her ability to maintain a private life in the public eye.

The Waltons “The Townie” Sarah Jane