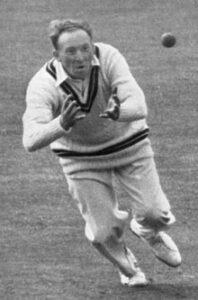 Stuart Surridge (1917-1992) was an English first-class cricketer who played for Surrey. Though not known to be a remarkable batsman or bowler, Surridge became one of the most successful team captains in the history of County Championship cricket. When not playing cricket, Surridge worked at his family’s business of building cricket bats.

Jim Laker was generally rated the best off spin bowler in the country; Tony Lock was an aggressive slow left-arm bowler; and Peter Loader, though eclipsed in Test terms by Brian Statham, Fred Trueman and Frank Tyson, was a fast bowler of menace. Batting resources were thinner, but in Peter May Surrey had one of the most talented batsmen to have emerged since the war. Despite having these players, Surrey lacked success until Surridge was appointed team captain after the 1951 season. They had shared the 1950 Championship with Lancashire but that was their only success since before the First World War.

Surridge’s methods were simple. His belief was that bowlers and catches win matches, and he aimed to win as many matches as he could. He himself was a fearless fielder close to the wicket, and he encouraged others to follow his example. In his five years as captain, only in 1953 did Surrey win less than half their matches; in 1955, the county won 23 out of 28 games, losing the other five and going through the whole season without a single draw. His tactics were sometimes ruthless. In one match against a weak Worcestershire, having dismissed his opponents for a total of 25 runs, Surridge declared the Surrey innings closed at just 92 for three wickets, and bowled Worcestershire out again for 40 to win by an innings and 27 runs. The weather forecast had not been good, he said. Even when Surrey’s Test cricketers were playing for England, Surridge could inspire their replacements to perform well.

The difference Surridge made to a talented collection of individuals was recognised when he was named as a Wisden Cricketer of the Year in 1953, but few other honours came his way, other than being chosen as President of Surrey in 1981 (his widow, Betty, was President in 1997). In retirement after 1956, he served on Surrey committees and ran his bat-making business, and was visiting his factory when he collapsed and died, aged 74. His son, also called Stuart, played once for Surrey in 1978.