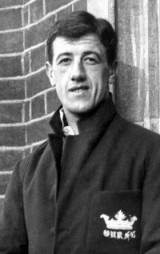 Harold Geoffrey Owen “Tuppy” Owen-Smith (18 February 1909 – 28 February 1990) was a South African cricketer who played Test cricket for South Africa and a rugby player who played for and captained the England rugby union team. He was born in Rondebosch, Cape Town, and died at Rosebank, also in Cape Town.

Owen-Smith was educated at Diocesan College in Rondebosch and attended the University of Cape Town. An all-rounded athlete, he represented his school and university in cricket and rugby amongst other sports.

Owen-Smith played cricket in 5 Tests in 1929 for South Africa, all during the tour of England, and was named Wisden Cricketer of the Year in 1930.

He was capped 10 times in rugby union by England from 1934 to 1937. He was captain throughout the 1937 Home Nations Championship, so he captained England three times. He is regarded as having been a fine attacking full-back and a great of the game. He also gained awards in boxing and athletics whilst at university in England.

Owen-Smith studied medicine at Magdalen College, Oxford, on a Rhodes Scholarship and qualified as a physician at St Mary’s Hospital Medical School. While at Oxford, he continued playing rugby and cricket for his university. After completing his degree he went back to South Africa and was a long-serving and much loved general practitioner, largely working from his home in Rondebosch.

His son, Michael Owen-Smith, is a former South African journalist who is now the media manager for Cricket South Africa.