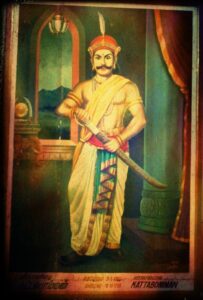 Veerapandiya Kattabomman was an 18th-century Palayakarrar and chieftain from Panchalankurichi in Tamil Nadu, India who waged a war against the British East India Company. He was captured by the British and hanged in 1799 CE

Kattabomman refused to accept the sovereignty of British East India Company , and fought against them.

Kattabomman was betrayed by the then ruler of the kingdom of Pudukottai Vijaya Raghunatha Tondaiman to the British on 1 October 1799. He was subsequently arrested at Kayathar, interrogated till 16 October 1799 and sentenced to public hanging. On 16 October 1799, he was hanged at Kayathar in Thoothukudi District, Tamil Nadu.