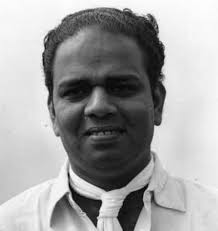 Vijay Laxman Manjrekar  (26 September 1931 in Bombay – 18 October 1983 in Madras) is a former Indian cricketer who played 55 Tests. A small man, he was a fine cutter and hooker of the ball. He was the father of Sanjay Manjrekar.

He put on 222 with Hazare in an innings that showed he would be a force to be reckoned with in the future. He would however fail to fulfill his early promise and faced problems with his weight and footwork. He would eventually finish with a Test average of 39, a disappointment for a man capable of averaging well into the 40’s. His finest series came against England in India 1961-62 when he made 586 runs @ 83.71. This included the highest score of his 7 centuries, with 189 at Delhi. Another notable performance was in 1964-65 where his innings of 59 and 39 helped India to a Test victory over Australia. He scored a ton in his final Test innings, coming against New Zealand at Madras in February 1965.

He held the record (subsequently beaten by Jonathan Trott) for the most test runs scored (3,208) without hitting a single six. He was among the four victims (others being Pankaj Roy, Dattajirao Gaekwad and Madhav Mantri) in Indias miserable 0-4 start in the second innings of the Headingley Test of 1952 with Fred Trueman playing havoc.

Manjrekar was also an occasional offspinner and occasional wicketkeeper. He played for 6 sides in the Ranji Trophy, representing Bombay, Bengal, Uttar Pradesh, Rajasthan, Andhra Pradesh, and Maharashtra. He had a prolific career in the tournament, scoring 3,734 runs @ 57.44.