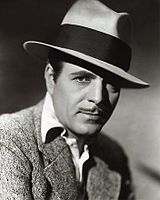 Warner Leroy Baxter (March 29, 1889 – May 7, 1951) was an American film actor from the 1910s to the 1940s. Baxter became known for his role as The Cisco Kid in the 1928 film In Old Arizona for which he won the Academy Award for Best Actor at the 2nd Academy Awards. He frequently played womanizing, charismatic Latin bandit types in westerns, and played The Cisco Kid or a similar character throughout the 1930s, but had a range of other roles throughout his career.

For his contributions to the motion picture industry, Baxter has a star on the Hollywood Walk of Fame.

Baxter and his mother went to live with her brother in Columbus, Ohio. They later moved to New York City where he became active in dramatics, both participating in school productions and attending plays. In 1898, the two moved to San Francisco where he graduated from Polytechnic High School. When the 1906 San Francisco earthquake struck, Baxter and his mother lived in Golden Gate Park for eight days and then went to live with friends in Alameda for three months. In 1908, they returned to Columbus. After selling farm implements for a living, Baxter worked for four months as the partner of Dorothy Shoemaker in an act on the Keith Vaudeville Circuit.

With June Lang and Fredric March

Baxter began his film career as an extra in 1914 in a stock company. He had his first starring role in Sheltered Daughters (1921), and starred in 48 features during the 1920s. His most notable silent roles were in The Great Gatsby (1926), Aloma of the South Seas (1926) as an island love interest opposite dancer Gilda Gray, and an alcoholic doctor in West of Zanzibar (1928) with Lon Chaney.

By 1936, Baxter was the highest paid actor in Hollywood, but by 1943 he had slipped to B movie roles, and he starred in a series of “Crime Doctor” films for Columbia Pictures. Baxter had roles in more than 100 films between 1914 and 1950.

Baxter married Viola Caldwell in 1911, but they were soon separated and then divorced in 1913. He married actress Winifred Bryson in 1918, remaining married until his death in 1951.

He was a close friend of William Powell with whom he had starred in three films, and was at Powell’s side when Jean Harlow died in 1937.

When not acting, Baxter was an inventor who co-created a searchlight for revolvers in 1935 which allowed a shooter to more clearly see a target at night. He also developed a radio device that would allow emergency crews to change traffic signals from two blocks away, providing them with safe passage through intersections. He financed the device’s installation at a Beverly Hills intersection in 1940.

Baxter suffered from arthritis for several years, and in 1951 he underwent a lobotomy to ease the pain. On May 7, 1951, he died of pneumonia at age 62 and was interred in Forest Lawn Memorial Park Cemetery in Glendale, California. He was survived by his second wife and his mother.

Baxter has a star on the Hollywood Walk of Fame at 6284 Hollywood Boulevard for his contributions to the motion picture industry. The induction ceremony occurred on February 8, 1960.