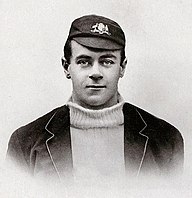 A strong domestic season in 1908-09 – 748 runs from 9 innings at an average of 83.11 – led to Bardsley’s inclusion in the 1909 Australian squad to tour England for the Ashes. After making his debut at Edgbaston, in the city of Birmingham, Bardsley struggled for runs in the Test arena, returning scores of 2, 6, 46, 0, 30, 2, 9 and 35 in his first eight innings. In the Fifth Test, at The Oval, London, however, Bardsley became the first Test cricketer to score a century – 100 runs or more – in both innings of a single Test match.

The 1910-11 series against South Africa in Australia was Bardsley’s strongest Test series – 573 runs at 63.67 in nine innings. The following year, against England, he struggled somewhat and was replaced by the ageing Syd Gregory for the Fifth Test. Bardsley returned to Test form in the inaugural Triangular Test series (featuring England, Australia and South Africa in England) ending the series as the leading run-scorer (392 runs at 65.33 from 6 innings).

The First World War robbed Bardsley of five years of his playing career. By the time Test cricket resumed in 1920, Bardsley was aged in his mid-thirties. His form was not the same; in the 21 Tests Bardsley played from 1920 to 1926, he managed only one century. Maintaining his position in the Australian Test squad proved to be difficult, especially considering the fine form of younger opening batsmen Bill Ponsford, Bill Woodfull and Herbie Collins. Despite his Test woes, domestically Bardsley continued to average in the high-30s – low-40s for New South Wales throughout much of the early-1920s.

Warren Bardsley was 43 years old when he made his last Test tour of England, in 1926. After captain Herbie Collins was felled by illness after the Second Test, the captaincy duties fell on Bardsley, despite his inexperience in that field. Both matches under Bardsley’s tenure ended in a draw.He was also the oldest captain to make captaincy debut at the age of 43 years and 216 days. Bardsley played all five Tests in the 1926 series; his undefeated innings of 193 at Lord’s in the Second Test would be his highest Test score, and made him the oldest player to score a Test century for Australia. It also created a record for the highest individual score in a Test Match at Lord’s (beaten in 1930 by Bradman’s 254).

After his retirement from Test and first-class cricket, Bardsley would briefly serve as a national selector. He continued to play club cricket for Glebe into his fifties. This longevity was attributed to rigorous exercise, and abstaining from alcohol and tobacco.

In 1945, aged 62, Bardsley married 45-year-old Gertrude Cope, his wife until his death in 1954. The last time they met, leaving the funeral of Dr. Rowley Pope, Jack Fingleton asked Bardsley his thoughts: “I was just thinking,” said the old cricketer, “what a great bloke old Doc was. I was thinking of him, and then I just happened to see So-And-So across there, and I thought, Poor old So-And-So. By cripes, he’s looking old. And then I thought, Well, I suppose some of them are looking at me and saying, ‘Poor old Bards. By cripes, he’s looking old!’ That’s just the trouble. We are all just poor old So-And-So’s.”