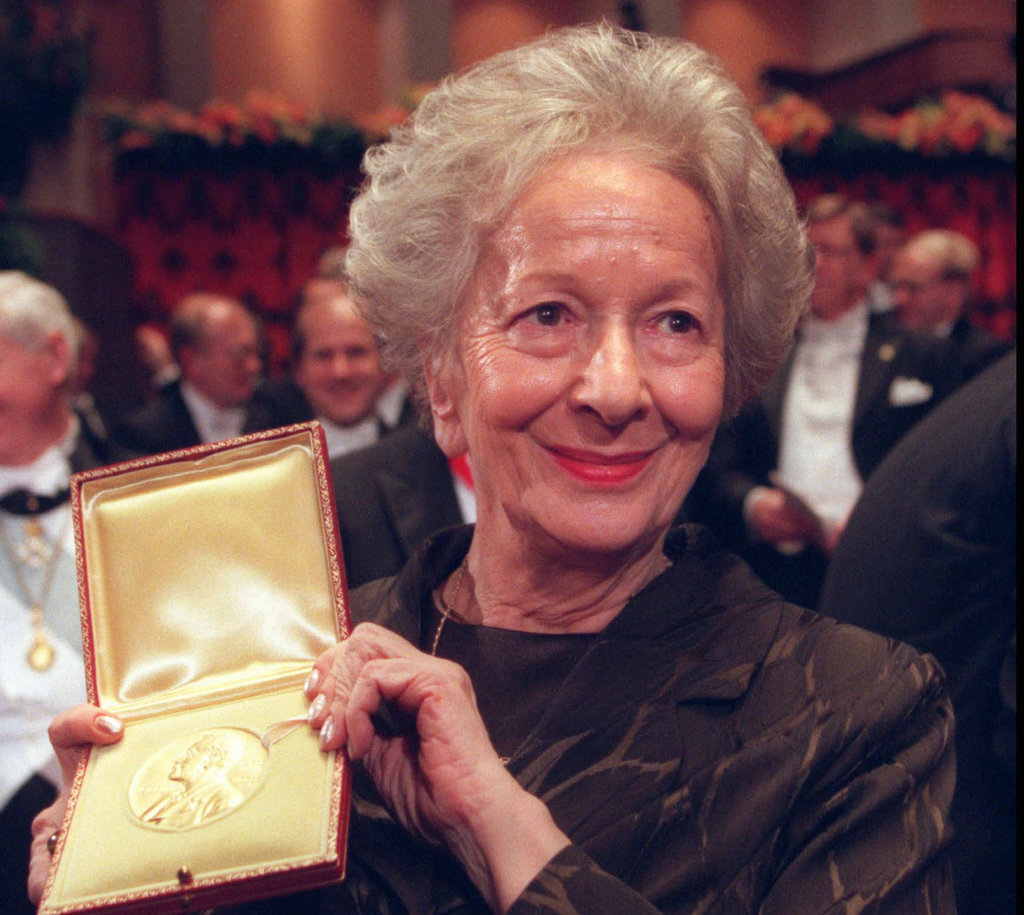 Maria Wisawa Anna Szymborska (2 July 1923  1 February 2012) was a Polish poet, essayist, translator and recipient of the 1996 Nobel Prize in Literature. Born in Prowent, which has since become part of Krnik, she later resided in Krakw until the end of her life. In Poland, Szymborska’s books have reached sales rivaling prominent prose authors: although she once remarked in a poem, “Some Like Poetry” (“Niektrzy lubi poezj”), that no more than two out of a thousand people care for the art.

Szymborska was awarded the 1996 Nobel Prize in Literature “for poetry that with ironic precision allows the historical and biological context to come to light in fragments of human reality”. She became better known internationally as a result of this. Her work has been translated into English and many European languages, as well as into Arabic, Hebrew, Japanese and Chinese.

Wisawa Szymborska was born on 2 July 1923 in Prowent, Poland (now part of Krnik, Poland), the second daughter of Wincenty and Anna (ne Rottermund) Szymborski. Her father was at that time the steward of Count Wadysaw Zamoyski, a Polish patriot and charitable patron. After the death of Count Zamoyski in 1924, her family moved to Toru, and in 1931 to Krakw, where she lived and worked until her death in early 2012.

When World War II broke out in 1939, she continued her education in underground classes. From 1943, she worked as a railroad employee and managed to avoid being deported to Germany as a forced labourer. It was during this time that her career as an artist began with illustrations for an English-language textbook. She also began writing stories and occasional poems. Beginning in 1945, she began studying Polish literature before switching to sociology at the Jagiellonian University in Krakw. There she soon became involved in the local writing scene, and met and was influenced by Czesaw Miosz. In March 1945, she published her first poem “Szukam sowa” (“Looking for words”) in the daily newspaper, Dziennik Polski. Her poems continued to be published in various newspapers and periodicals for a number of years. In 1948, she quit her studies without a degree, due to her poor financial circumstances; the same year, she married poet Adam Wodek, whom she divorced in 1954 (they remained close until Wodek’s death in 1986). Their union was childless. Around the time of her marriage she was working as a secretary for an educational biweekly magazine as well as an illustrator. Her first book was to be published in 1949, but did not pass censorship as it “did not meet socialist requirements”. Like many other intellectuals in post-war Poland, however, Szymborska adhered to the People’s Republic of Poland‘s (PRL) official ideology early in her career, signing an infamous political petition from 8 February 1953, condemning Polish priests accused of treason in a show trial. Her early work supported socialist themes, as seen in her debut collection Dlatego yjemy (That is what we are living for), containing the poems “Lenin” and “Modziey budujcej Now Hut” (“For the Youth who are building Nowa Huta“), about the construction of a Stalinist industrial town near Krakw. She became a member of the ruling Polish United Workers’ Party.

Although initially close to the official party line, Szymborska gradually grew estranged from socialist ideology and renounced her earlier political work. Although she did not officially leave the party until 1966, she began to establish contacts with dissidents. As early as 1957, she befriended Jerzy Giedroyc, the editor of the influential Paris-based emigr journal Kultura, to which she also contributed. In 1964, she opposed a Communist-backed protest to The Times against independent intellectuals, demanding freedom of speech instead.

In 1953, Szymborska joined the staff of the literary review magazine ycie Literackie (Literary Life), where she continued to work until 1981 and from 1968 ran her own book review column, called Lektury Nadobowizkowe. Many of her essays from this period were later published in book form. From 198183, she was an editor of the Krakw-based monthly periodical, NaGlos (OutLoud). In the 1980s, she intensified her oppositional activities, contributing to the samizdat periodical Arka under the pseudonym “Staczykwna”, as well as to the Paris-based Kultura. The final collection published while Szymborska was still alive, Dwukropek, was chosen as the best book of 2006 by readers of Poland’s Gazeta Wyborcza. She also translated French literature into Polish, in particular Baroque poetry and the works of Agrippa d’Aubign. In Germany, Szymborska was associated with her translator Karl Dedecius, who did much to popularize her works there.

Surrounded by friends and relatives, Szymborska died peacefully in her sleep at home in Krakw in 2012, aged 88. Szymborska was working on new poetry at the time of her death, though was unable to arrange her final poems for publication in the way she would have wanted. Her last poetry was published later in 2012.

Szymborska frequently employed literary devices such as ironic precision, paradox, contradiction and understatement, to illuminate philosophical themes and obsessions. Many of her poems feature war and terrorism. She wrote from unusual points of view, such as a cat in the newly empty apartment of its dead owner. Her reputation rests on a relatively small body of work, fewer than 350 poems. When asked why she had published so few poems, she said: “I have a trash can in my home”.

Szymborska’s poem “Nothing Twice” turned into a song by composer Andrzej Munkowski performed by ucja Prus in 1965 makes her poetry known in Poland, rock singer Kora cover of “Nothing Twice” was a hit in 1994.

In her last years Szymborska collaborated with Polish jazz trumpeter Tomasz Stako who dedicated his record Wisawa (ECM, 2013) to her memory – taking inspiration for the compositions from their collaboration and her poetry.