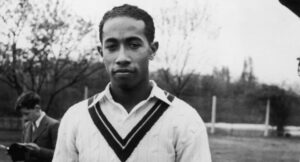 The West Indies toured England in 1950. They had a good batting line-up including the “three W’s” (Clyde Walcott, Everton Weekes and Frank Worrell), but they were unusually short of bowlers. They took two young spinners, 20-year-old Alf Valentine and 21-year-old Sonny Ramadhin, who had only played two first-class matches each. Valentine in particular was a surprising choice as he had only taken two wickets in those matches at an average of 95, but somehow he had caught the eye of the West Indies captain, John Goddard.

Valentine did not impress in the first few matches of the tour, and was not certain to be in the Test team, until in the final warm-up match before the Tests he took 8 for 26 and 5 for 41 as the West Indies beat Lancashire by an innings and 220 runs.

He justified his selection for the Test side when in the first innings of the first Test, he took the first eight wickets, five of them before lunch on the first day. He finished with 8 for 104 in the innings, and 11 for 204 in the match off 106 overs. He was the first bowler ever to take eight wickets in his first Test innings, a feat which has only been achieved three times since as of December 2012.

England won that match, but in the second Test, at Lord’s, the West Indies recorded a 326-run victory, thanks to Clyde Walcott’s 168 not out in the second innings, and to the bowling of Ramadhin (11 for 152) and Valentine (7 for 127). This was West Indies’ first ever Test victory in England, and it was commemorated in the famous Victory Calypso:

Valentine’s career never quite reached the spectacular heights of the 1950 tour again. In purely statistical terms, the 1950 warm-up match against Lancashire was his career-best first-class match, and his first Test was his career-best Test match. In the West Indies’ next Test series, in Australia in 1951-52, he took 24 wickets in five matches; and when India visited the West Indies in 1953, he took 28 wickets, again in five matches. In 1954 he became the first West Indian to reach 100 Test wickets, in only his 19th Test. But in his last 20 Test matches, from 1954 to 1962, he only took 46 wickets at an average of 40.63. He was still an effective containing bowler, conceding only 2.06 runs per over in those later years, but he didn’t have the attacking effectiveness of his dramatic debut. On the 1957 tour of England he suffered a complete loss of confidence.

After his last Test, he served as the national coach of Jamaica.

Born in Kingston, Jamaica, Valentine was married twice. He had four daughters with his first wife, Gwendolyn, who died. He moved to Florida with his second wife, Jacquelyn, where they fostered dozens of children whose parents were in prison. He died in Orlando, Florida in 2004, aged 74.