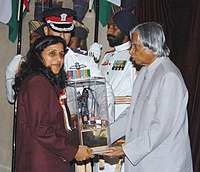 She captained the Indian team in 8 ODI matches, all during the 2000 Cricinfo Women’s Cricket World Cup where India advanced to the semi-finals before losing to New Zealand.

She played for Air India women’s cricket team in the Indian women’s domestic league. The only player to have played for consecutive four world cups. Her 81 dismissals behind the wicket stands in the fourth position in terms of all-time dismissals by wicket-keepers from all countries. Jain also holds the record for playing the most number of Women’s One Dayers by keeping wicket and by opening the batting as captain(7)[1]

Anju received the Arjuna Award in 2005 for her sporting achievements from then President of India Dr. APJ Abdul Kalam, hence been declared the best sportsperson of the year in Cricket.

She has been a coach associated with the development of youth and women’s cricketers of Andhra Pradesh. She has also been a coach to Odisha, Tripura and Assam as well as for the Indian side. Currently, she is the head coach of Bangladesh Women Cricket Team.[2]