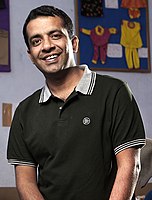 Born in Meerut, Gupta spent his initial years in Chakrata, Banbasa smaller towns of Uttarakhand and Bareilly, Uttar Pradesh as his father got postings in his job with Indian Army’s Military Engineering Services (MES).

Anshu is the eldest of four siblings in a middle-class family from Dehradun. A road accident at the end of Class 12 rendered him bed-ridden – botched healthcare because his father refused to pay a bribe has left him with a lifelong pain when he stands for too long – but the yearlong confinement in bed served as a period for reading and introspection. Even then, he started contributing to household expenses by writing articles for Hindi newspapers. He holds a Masters in economics, and a double major in journalism and mass communications. As a graduate student he travelled to Uttarkashi in North India in 1991 to help with relief efforts after a devastating earthquake in the region. This was his first real exposure to the scale of problems of India’s rural masses.[5]

After working in the corporate sector for some time, he started Goonj in 1999, with his wife Meenakshi Gupta and a few friends, to work on the basic need of clothing, an issue that does not have a place in the development agenda. Using cloth as a metaphor for other crucial but ignored needs like sanitary pads for menses or school material for education, for the last 18 years, under Gupta’s leadership Goonj has taken the growing urban waste and used it as a tool to trigger development work on diverse issues; roads, water, environment, education, health etc. in backward and remote pockets of India. Under Goonj’s flagship initiative Cloth for Work village communities across India work on their own issues and get the urban material as a reward for their efforts. Cloth for work and all other initiatives of Goonj have received various, national and international, awards and accolades.[6]

“Cloth for Work” (CFW) has evolved two new currencies of development – material and labor. Under this initiative, Goonj works with partners and communities to identify infrastructural improvements that need to be undertaken in the villages. Villagers then work to dig wells, clean ponds, repair roads, and build schools in the community using local resources and their own wisdom, for which they are compensated with material resources like clothing, utensils, furniture, and food grains.[7][8]

Not Just a Piece of Cloth

Gupta initiated the “Not Just a Piece of Cloth” (NJPC) campaign after the 2004 tsunami. According to Gupta, “… we dealt with more than 100 trucks of post disaster cloth wastage on the roads of Tamil Nadu. The unwearable cloth from this lot was turned into cloth menstrual pads …”.[7]