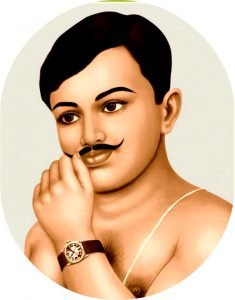 Chandra Shekhar Azad (23 July 1906 – 27 February 1931), popularly known as Azad (“The Liberated”), was an Indian revolutionary who reorganised the Hindustan Republican Association under the new name of Hindustan Socialist Republican Association (HSRA) after the death of its founder, Ram Prasad Bismil, and three other prominent party leaders, Roshan Singh, Rajendra Nath Lahiri and Ashfaqulla Khan. He is considered to be the mentor of Bhagat Singh and chief strategist of the HSRA.

Chandra Shekhar Azad was born on 23 July 1906 in Bhawra village, in the present-day Alirajpur district. He was then called Chandra Shekar Tiwari.[citation needed] His forefathers were from the Badarka village near Kanpur (in present-day Unnao District. His mother, Jagrani Devi, was the third wife of his father Sitaram Tiwari. After the birth of their first son, Sukhdev, in Badarka, the family moved to the Alirajpur State. Chandra Shekhar spent his childhood in Bhawra, and learned archery from the tribal Bhils of the erstwhile Jhabua district, which helped him later on during the armed struggle against the British. A monument of Chandra Shekhar Azad in his native village Badarka His mother wanted her son to be a great Sanskrit scholar and persuaded his father to send him to Kashi Vidyapeeth, Banaras to study. In December 1921, when Mohandas K. Gandhi launched the Non-Cooperation Movement, Chandra Shekhar, then a 15 year old student, joined.. As a result, he was arrested and sentenced to fifteen days’ imprisonment with hard punishments. From that day onward, having announced his name to be Azad (The Liberated) in court, Chandra Shekhar Tiwari assumed the name of Azad.

This section does not cite any references or sources. Please help improve this section by adding citations to reliable sources. Unsourced material may be challenged and removed. (September 2012) After suspension of the non-cooperation movement in 1922 by Gandhi, Azad became more aggressive. He committed himself to achieve complete independence by any means. Azad also believed that India’s future lay in socialism. He met a young revolutionary, Pranvesh Chatterji, who introduced him to Ram Prasad Bismil who had formed the Hindustan Republican Association (HRA), a revolutionary organisation. Azad was impressed with the aim of HRA, i.e., an independent India with equal rights and opportunity to everyone without discrimination of caste, creed, religion or social status. On introduction, Bismil was impressed by Azad, when Azad reportedly put his hand over a lamp and did not remove it till his skin burnt. He then became an active member of the HRA and started to collect funds for HRA. Most of the fund collection was through robberies of government property. He also wanted to build a new India based on socialist principles. Azad and his compatriots also planned and executed several acts of violence against the British. Most of his revolutionary activities were planned and executed from Shahjahanpur which was also the hometown of Ram Prasad. He was involved in the famous Kakori Train Robbery of 1925, in the attempt to blow up the Viceroy’s train in 1926, and at last the shooting of J.P. Saunders at Lahore in 1928 to avenge the killing of Lala Lajpat Rai. Despite being a member of Congress, Motilal Nehru regularly gave money in support of Azad,

This section does not cite any references or sources. Please help improve this section by adding citations to reliable sources. Unsourced material may be challenged and removed. (September 2012) Azad made Jhansi his organisation’s hub for some time. He used the forest of Orchha, situated 15 kilometres (9.3 mi) from Jhansi, as a site for shooting practice and, being an expert marksman, he trained other members of his group. Near the forest he built a hut near to a Hanuman Temple on the banks of the Satar River. He lived there under the alias of Pandit Harishankar Brahmachari for a long period, and started teaching children from the nearby village of Dhimarpura. In this way he managed to establish good rapport with the local residents. The village Dhimarpura was renamed as Azadpura by the Madhya Pradesh government. While living in Jhansi, he also learned to drive a car at Bundelkhand Motor Garage in Sadar Bazar. Sadashivrao Malkapurkar, Vishwanath Vaishampayan and Bhagwan Das Mahaur came in close contact with him and became an integral part of his revolutionary group. The then congress leaders from Raghunath Vinayak Dhulekar and Sitaram Bhaskar Bhagwat were also close to Azad. He also stayed for sometime in the house of Rudra Narayan Singh at Nai Basti, as well as Bhagwat’s house in Nagra.

This section does not cite any references or sources. Please help improve this section by adding citations to reliable sources. Unsourced material may be challenged and removed. (September 2012) The HRA was formed by Bismil, Chatterji, Sachindra Nath Sanyal and Shachindra Nath Bakshi in 1924 just after two year of the non co-operation movement. In the aftermath of the Kakori train robbery in 1925, the British clamped down on revolutionary activities. Prasad, Ashfaqulla Khan, Thakur Roshan Singh and Rajendra Nath Lahiri were sentenced to death for their participation. Azad, Keshab Chakravarthy and Murari Sharma evaded capture. Chandra Shekhar Azad later reorganized the HRA with the help of revolutionaries like Sheo Verma and Mahaveer Singh. Azad was also a close associate of Bhagwati Charan Vohra who along with Bhagat Singh, Sukhdev, and Rajguru, helped him to transform the HRA into the HSRA in 1928 so as to achieve their primary aim of an independent India based on socialist principle.


In the last week of February 1931, Azad went to Sitapur Jail and met Ganesh Shankar Vidyarthi. He hoped that Vidyarthi would involve in the case of Bhagat Singh and others as he had previously done in the Kakori conspiracy case. Vidyarthi suggested him to go to Allahabad and meet Jawahar Lal Nehru. If he could be convinced, Nehru would be able to persuade Gandhi to talk to the Viceroy Lord Irwin and reach an agreement with the British Government in the forthcoming Gandhi-Irwin Pact. Azad met Nehru on 27 February 1931 and asked for help in stopping the execution of Bhagat Singh, Rajguru and Sukhdev. Nehru refused and told him to leave immediately.[citation needed] Azad proceeded to the Alfred Park and met with a revolutionary colleague, Sukhdev Raj. The police were notified of his location by an informer. Faced with armed police, Azad fired upon them. He was wounded in the process of killing three policemen and wounding some others. His actions made it possible for Sukhdev Raj to escape, after which Azad shot himself when he ran out of ammunition. The file related to Azad is preserved in C.I.D. Headquarters, 1, Gokhale Marg, Lucknow. The Colt pistol of Chandra Shekhar Azad is displayed at the Allahabad Museum within the Chandrashekhar Azad Park.[citation needed] The body was sent to Rasulabad Ghat for cremation without informing general public. As it came to light, people surrounded the park where the incident had taken place. They made slogans against the British rule and praised Azad.[citation needed] He once claimed that as his name was “Azad”, he would never be taken alive by police

Alfred Park, where he became “Shaheed”, has been renamed Chandrashekhar Azad Park. Several schools, colleges, roads and other public institutions across India are also named after him. Starting from Manoj Kumar’s 1965 film Shaheed, every film or commemoration of the life of Bhagat Singh has featured the character of Azad.[citation needed] Sunny Deol portrayed Azad in the movie 23rd March 1931: Shaheed. In the movie The Legend of Bhagat Singh, starring Ajay Devgan, Azad was portrayed by Akhilendra Mishra. The lives of Azad, Bhagat Singh, Rajguru, Bismil and Khan were depicted in the 2006 film Rang De Basanti, with Aamir Khan portraying Azad. The movie, which draws parallels between the lives of young revolutionaries such as Azad and Bhagat Singh, and today’s youth, also dwells upon the lack of appreciation among today’s Indian youth for the sacrifices made by these men.