Chandra Shekhar (17 April 1927 – 8 July 2007) was an Indian politician who served as the eighth Prime Minister of India, between 10 November 1990 and 21 June 1991. He headed a minority government of a breakaway faction of the Janata Dal with outside support from the Indian National Congress as a stop gap arrangement to delay elections. He is the first Indian Prime Minister who has never held any Government office. His government was largely seen as a “puppet” and “lame duck” and the government was formed with the fewest party MPs in the Lok Sabha. His government could not pass the budget at a crucial time when Moody had downgraded India and it further went down after the budget was not passed and global credit-rating agencies further downgraded India from investment grade making it impossible to even get short term loans and in no position to give any commitment to reform, the World Bank and IMF stopped their assistance. Chandrasekhar had to authorise mortgaging of gold to avoid default of payment and this action came in for particular criticism as it was done secretly in the midst of the election. The Indian economic crisis, 1991, and the Assassination of Rajiv Gandhi plunged his government into crisis.

Chandra Shekhar was born on 17 April 1927 in a Rajput family at Ibrahimpatti, a village in the back of Uttar Pradesh. He came from a poor farming family. He was awarded a Bachelor of Arts (graduate) degree at Satish Chandra P.G. College. He attended Allahabad University, obtaining his master’s degree in political science in 1950. He was known as a firebrand in student politics and started his political career with Dr. Ram Manohar Lohia. After when he had completed his graduation, he became active in socialist politics.

He joined the socialist movement and was elected secretary of the district Praja Socialist Party (PSP), Ballia. Within a year, he was elected joint secretary of the PSP’s State unit in Uttar Pradesh. In 1955-56, he took over as general secretary of the party in the State. His career as a parliamentarian began with his election to the Rajya Sabha from Uttar Pradesh in 1962. He came under the spell of Acharya Narendra Dev, a fiery Socialist leader at the beginning of his political career. From 1962 to 1977, Shekhar was a member of Rajya Sabha, the Upper house of the Parliament of India. He was elected to Rajya Sabha from Uttar Pradesh on 3 April 1962 as an independent candidate and completed his tenure on 02/04/1968. After this, he was re-elected twice to Rajya Sabha from Uttar Pradesh as an INC candidate from 03/04/1968 to 02/04/1974 and from 03/04/1974 to 02/04/1980. He resigned from Rajya Sabha on 2 March 1977 after he had been elected to Lok Sabha from Ballia. When the emergency was declared, even though he was a Congress party politician, he was arrested and sent to Patiala jail. He went on a nationwide padayatra in 1983 to know the country better, which he claimed gave jitters to Prime Minister Indira Gandhi. He was called a “Young Turk”.

Chandra Shekhar was a prominent leader of the socialists. He joined Congress in 1964. From 1962 to 1967, he was a member of the Rajya Sabha. He first entered the Lok Sabha in 1967. He came to be known as a ‘young Turk’ for his conviction and courage in the fight against the vested interests. The other ‘young Turks’, who formed the ‘ginger group’ in the Congress in the fight for egalitarian policies, included leaders like Feroze Gandhi, Satyendra Narayan Sinha, Mohan Dharia and Ram Dhan. As a member of the Congress Party, he vehemently criticised Indira Gandhi for her declaration of emergency in 1975. Chandrashekhar was arrested during the emergency and sent to prison along with other “young turks”.

Chandrasekhar was jailed during the emergency and after , he became the President of Janata Party. In the parliamentary elections, Janata Party formed the government after the 1977 Indian general election headed by Morarji Desai.However the party lost the 1980 elections and were routed in 1984 Indian general election winning just 10 seats and Chandrasekhar losing his own Ballia seat to Jagannath Chowdhary.

In 1988, his party merged with other parties and formed the government under the leadership of V.P. Singh. Again his relationship with the coalition deteriorated and he formed another party, Janata Dal socialist faction. With the support of Congress (I) headed by Rajiv Gandhi, he replaced V.P. Singh as the Prime Minister of India on November 1990. After 1977, he was elected to Lok Sabha in all the elections, except in 1984 when the Congress swept the polls after Indira Gandhi’s assassination. The post of Prime Minister, which he thought he genuinely deserved, eluded him in 1989 when V. P. Singh pipped him at the post and was chosen to head the first coalition government at the Centre.

Chandra Shekhar seized the moment and left the Janata Dal with several of his own supporters to form the Samajwadi Janata Party/Janata Dal (Socialist). He won a confidence motion with the support of his 64 MPs and Rajiv Gandhi, the leader of the Opposition, and was sworn in as Prime Minister. Eight Janata Dal MPs who voted for this motion were disqualified by the speaker Rabi Ray.

Chandra Shekhar was prime minister for seven months, the second shortest period after that of Charan Singh. He also handled the portfolios of Defence and Home Affairs during this period. However, his government could not introduce a full budget because on March 6, 1991 Congress withdrew support during its formulation. As a result, Chandra Shekhar resigned the office of the prime minister on the same day.

After handing the premiership to P. V. Narasimha Rao, Chandra Shekar’s political importance was reduced, although he was able to retain his seat in the Lok Sabha for many years afterward. He established Bharat Yatra Centres in various parts of the country and set up a trust in Bhondsi village in Haryana’s Gurgaon to focus on rural development.[citation needed] 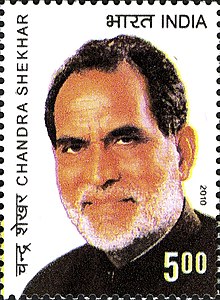 Chandra Shekhar on 2010 stamp of India

Chandra Shekhar died on 8 July 2007, a week after his 80th birthday. He had been suffering with multiple myeloma for some time and had been in the Apollo Hospital at New Delhi since May. He was survived by two sons.

Politicians from across the spectrum of Indian parties paid tribute to him and the government of India declared seven days of state mourning. He was cremated with full state honours on a traditional funeral pyre at Jannayak sthal, on the banks of the river Yamuna, on 10 July. In August, his ashes were immersed in the river Siruvani.