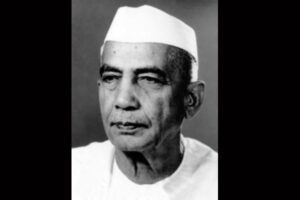 Charan Singh was born on 23 December 1902 in a rural peasant Jat family of village Noorpur, District Hapur (Erstwhile District Meerut), Uttar Pradesh (Erstwhile United Provinces of Agra and Oudh). Charan Singh entered politics as part of the Independence Movement motivated by Mohandas Gandhi. He was active from 1931 in the Ghaziabad District Arya Samaj as well as the Meerut District Indian National Congress for which he was jailed twice by the British. Before independence, as a member of Legislative Assembly of the United Provinces elected in 1937, he took a deep interest in the laws that were detrimental to the village economy and he slowly built his ideological and practical stand against the exploitation of tillers of the land by landlords.

Between 1952 and 1967, he was one of “three principal leaders in Congress state politics.” He became particularly notable in Uttar Pradesh from the 1950s for drafting and ensuring the passage of what were then the most revolutionary land reform laws in any state in India under the tutelage of the then Chief Minister Pandit Govind Ballabh Pant; first as Parliamentary Secretary and then as Revenue Minister responsible for Land Reforms. He became visible on the national stage from 1959 when he publicly opposed the unquestioned leader and Prime Minister Jawaharlal Nehru’s socialistic and collectivist land policies in the Nagpur Congress Session. Though his position in the faction-ridden UP Congress was weakened, this was a point when the middle peasant communities across castes in North India began looking up to him as their spokesperson and later as their unquestioned leader. Singh stood for tight government spending, enforced consequences for corrupt officers, and advocated a “firm hand in dealing with the demands of government employees for increased wages and dearness allowances.” It is also worth noting that within the factional UP Congress, his ability to articulate his clear policies and values made him stand out from his colleagues. Following this period, Charan Singh defected from the Congress on 1 April 1967, joined the opposition party, and became the first non-Congress chief minister of UP. This was a period when non-Congress governments were a strong force in India from 1967-1971.

As leader of the Bharatiya Lok Dal, a major constituent of the Janata coalition, he was disappointed in his ambition to become Prime Minister in 1977 by Jayaprakash Narayan’s choice of Morarji Desai.

During 1977 Lok Sabha Elections, the fragmented opposition united a few months before the elections under the Janata Party banner, for which Chaudhary Charan Singh had been struggling almost single-handedly since 1974. It was because of the efforts of Raj Narain that he became Prime Minister in the year 1979 though Raj Narain was Chairman of Janata Party-Secular and assured Charan Singh of elevating him as Prime Minister, the way he helped him to become Chief Minister in the year 1967 in Uttar Pradesh. However, he resigned after just 24 weeks in office when Indira Gandhi’s Congress Party withdrew support to the government. Charan Singh said he resigned because he was not ready to be blackmailed into withdrawing Indira Gandhi’s emergency-related court cases. Fresh elections were held six months later. Charan Singh continued to lead the Lok Dal in opposition till his death in 1987.

Charan Singh opposed Jawaharlal Nehru on his Soviet-style economic reforms. Charan Singh was of the opinion that cooperative farms would not succeed in India. Being a son of a farmer, Charan Singh opined that the right of ownership was important to the farmer in remaining a cultivator. He wanted to preserve and stabilize a system of peasant proprietorship. Charan Singh’s political career suffered due to his open criticism of Nehru’s economic policy.

Charan Singh left the Congress party in 1967, and formed his own political party, Bharatiya Kranti Dal. With the help and support of Raj Narain and Ram Manohar Lohia, he became Chief Minister of Uttar Pradesh in 1967, and later in 1970. In 1975, he was jailed again, but this time by then Indian Prime Minister Indira Gandhi, daughter of his former rival Nehru. She had declared the state of emergency and jailed all her political opponents. In the 1977 general elections, the Indian populace voted her out, and the opposition party, of which Chaudhary Charan Singh was a senior leader came into power. He served as Deputy Prime Minister, Home Minister and Finance minister in the Janata government headed by Morarji Desai.

When Janata Party won Lok Sabha elections in 1977, its MPs authorized Jayaprakash Narayan and Acharya Kripalani to choose the PM. Morarji Desai was chosen as Prime Minister, and he made Charan Singh Home Minister. Charan Singh was asked to resign around June 1978 following differences with Desai, but was reinducted as Deputy PM in January 1979. But the truce did not last long, and a mutiny reduced the government to minority. Charan Singh was sworn in as Prime Minister on 28 July 1979, with outside support by Indira Congress and Yeshwantrao Chavan of Congress (Socialist) faction as his Deputy PM. Just before he was to prove his majority in Lok Sabha, Indira Gandhi withdrew support to his government, and he resigned on 20 August 1979, after just 23 days, the only PM who has failed to face parliament. He advised President Neelam Sajiva Reddy to dissolve Lok Sabha. Janata Party leader Jagjivan Ram challenged the advice and sought time to cobble support. But Lok Sabha was dissolved, and Charan Singh continued as caretaker PM until January 1980.

Singh had six children with wife Gayatri Devi. His son Ajit Singh is currently the president of a political party Rashtriya Lok Dal and a former Union Minister and a many times Member of Parliament. Ajit Singh’s son Jayant Chaudhary was elected to 15th Lok Sabha from Mathura, which he lost to Hema Malini in the election of 2014.

Singh suffered a stroke on 29 November 1985. He could not completely recover from the condition despite being treated the following March at a hospital in the US. At 11:35 p.m. (IST) on 28 May 1987 doctors were called for to his residence in New Delhi, after his respiration was found “unsteady”. Efforts to revive him failed and was declared dead at 2:35 a.m. (IST) the following morning after a “cardiovascular collapse”. 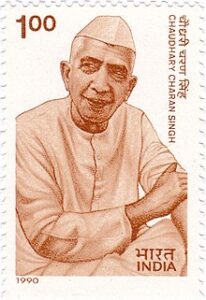 A commemorative postage stamp of Charan Singh issued in 1990

Since his death, many who knew Singh have ensured his life and work are remembered positively. These perceptions enforce the notion that he was of a “higher category of leaders” in the areas of “intellect, personal integrity, and . . . coherence of his economic and social thought.” His association with causes dear to farming communities in India caused his memorial in New Delhi to be named Kisan Ghat (in Hindi, Kisan is the word for farmer). His birthday on 23 December is celebrated as Kisan Diwas in India. A commemorative postage stamp was issued by the government of India on the third death anniversary (29 May 1990) of Charan Singh.