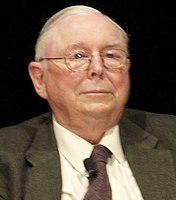 Charles Thomas Munger (born January 1, 1924) is an American investor, businessman, former real estate attorney, and philanthropist. He is vice chairman of Berkshire Hathaway , the conglomerate controlled by Warren Buffett; Buffett has described Munger as his partner. Munger served as chairman of Wesco Financial Corporation from 1984 through 2011. He is also chairman of the Daily Journal Corporation, based in Los Angeles, California, and a director of Costco Wholesale Corporation.

Munger was born in Omaha, Nebraska. As a teenager he worked at Buffett & Son, a grocery store owned by Warren Buffett’s grandfather. His father, Alfred C. Munger, was a lawyer. His grandfather is Thomas Charles Munger.

He enrolled in the University of Michigan, where he studied mathematics. During his time in college, he joined the fraternity, Sigma Phi Society. In early 1943, a few days after his 19th birthday, he dropped out of college to serve in the U.S. Army Air Corps, where he became Second Lieutenant.  After receiving a high score on the Army General Classification Test, he was ordered to study meteorology at Caltech in Pasadena, California, the town he was to make his home.

In college and the Army he developed “an important skill”: card playing. What you have to learn is to fold early when the odds are against you, or if you have a big edge, back it heavily because you don’t get a big edge often. Opportunity comes, but it doesn’t come often, so seize it when it does come.

He moved with his family to California, where he joined the law firm Wright & Garrett (later Musick, Peeler & Garrett). In 1962 he founded and worked as a real estate attorney at Munger, Tolles & Olson LLP. He then gave up the practice of law to concentrate on managing investments and later partnered with Otis Booth in real estate development. He then partnered with Jack Wheeler to form Wheeler, Munger, and Company, an investment firm with a seat on the Pacific Coast Stock Exchange. He wound up Wheeler, Munger, and Co. in 1976, after losses of 32% in 1973 and 31% in 1974.

Although Munger is better known for his association with Buffett, he ran an investment partnership of his own from 1962 to 1975. According to Buffett’s essay, “The Superinvestors of Graham-and-Doddsville“, published in 1984, Munger’s investment partnership generated compound annual returns of 19.8% during the 1962-75 period compared to a 5.0% annual appreciation rate for the Dow.

Munger was previously the chairman of Wesco Financial Corporation, now a wholly owned subsidiary of Berkshire Hathaway. It began as a savings and loan association, but eventually grew to control Precision Steel Corp., CORT Furniture Leasing, Kansas Bankers Surety Company, and other ventures. Wesco Financial also held a concentrated equity portfolio of over US$1.5 billion in companies such as Coca-Cola, Wells Fargo, Procter & Gamble, Kraft Foods, US Bancorp, and Goldman Sachs. Munger believes that holding a concentrated number of stocks, that he knows extremely well, will in the long term produce superior returns.

Wesco is based in Pasadena, California, Munger’s adopted hometown. Pasadena was also the site of the company’s annual shareholders’ meeting, which were typically held on the Wednesday or Thursday after the more famous Berkshire Hathaway annual meeting. Munger’s meetings were nearly as legendary in the investment community as those he co-hosts with Buffett in Omaha. Such meetings were often perfunctory, but Munger interacted with the other Wesco shareholders at considerable length, sometimes speculating about what Benjamin Franklin would do in a given situation. Meeting notes have been posted on the Futile Finance? website, but no updates exist beyond 2011.

Munger is also the chairman of Daily Journal Corporation. Since Westco meetings ended, the Daily Journal annual meeting has grown in importance, as investors flock to the meeting to listen to him speak at length.

In multiple speeches, and in the book Poor Charlie’s Almanack, Munger has introduced the concept of “elementary, worldly wisdom” as it relates to business and finance. Munger’s worldly wisdom consists of a set of mental models framed as a latticework to help solve critical business problems.

Munger, along with Buffett, is one of the main inspirations behind the book Seeking Wisdom: From Darwin to Munger. Author Peter Bevelin explained his key learnings from both Munger and Buffett in a 2007 interview: “How to think about businesses and investing, how to behave in life, the importance of ethics and honesty, how to approach problems but foremost how to reduce the chance of meeting problems.” Bevelin stated that previously, he “was lacking the Munger ability to un-learn my own best-loved ideas”.

Munger states that high ethical standards are integral to his philosophy; at the 2009 Wesco Financial Corporation annual meeting he said, “Good businesses are ethical businesses. A business model that relies on trickery is doomed to fail.” During an interview and Q&A session at Harvard-Westlake School on January 19, 2010, Munger referred to American philosopher Charles Frankel in his discussion on the financial crisis of 2007-08 and the philosophy of responsibility. Munger explained that Frankel believed:

…the system is responsible in proportion to the degree that the people who make the decisions bear the consequences. So to Charlie Frankel, you dont create a loan system where all the people who make the loans promptly dump them on somebody else through lies and twaddle, and they dont bear the responsibility when the loans are good or bad. To Frankel, that is amoral, that is an irresponsible system.

During a talk at Harvard in 1995 entitled The Psychology of Human Misjudgment, Munger mentions Tupperware parties and open outcry auctions, where he explained “three, four, five of these things work together and it turns human brains into mush,” meaning that normal people will be highly likely to succumb to the multiple irrational tendencies acting in the same direction. In the Tupperware party, you have reciprocation, consistency and commitment tendency, and social proof. (The hostess gave the party and the tendency is to reciprocate; you say you like certain products during the party so purchasing would be consistent with views you’ve committed to; other people are buying, which is the social proof.) In the open outcry auction, there is social proof of others bidding, reciprocation tendency, commitment to buying the item, and deprivation super-reaction syndrome, i.e. sense of loss. The latter is an individual’s sense of loss of what he believes should be or is his. These biases often occur at either conscious or subconscious level, and in both microeconomic and macroeconomic scale.

In 1945, while studying at Caltech, Munger married Nancy Huggins, daughter of Frederick R. Huggins and Edith M. Huggins. She was a Pasadena native who had been Munger’s sister’s roommate at Scripps College. They had three children, Wendy Munger (a former corporate lawyer, trustee of Stanford University, and trustee of The Huntington Library), Molly Munger (a civil rights attorney and funder of a ballot initiative to raise California taxes for public education) and Teddy Munger (deceased, leukemia, age 9).

Munger enjoys architecture and has designed multiple buildings, including dormitories at Stanford University and University of Michigan as well as the house he currently inhabits.

Munger is critical of cryptocurrencies, referring to Bitcoin as “poison”.

As of March 2019, Munger has an estimated net worth of $1.8 billion according to Forbes Magazine.

Munger is a major benefactor of the University of Michigan. In 2007, Munger made a $3 million gift to the University of Michigan Law School for lighting improvements in Hutchins Hall and the William W. Cook Legal Research Building, including the noted Reading Room. In 2011, Munger made another gift to the Law School, contributing $20 million for renovations to the Lawyers Club housing complex, which will cover the majority of the $39 million cost. The renovated portion of the Lawyers Club will be renamed the Charles T. Munger Residences in the Lawyers Club in his honor.

On April 18, 2013, the University of Michigan announced the single largest gift in its history: a US$110 million gift from Munger to fund a new “state of the art” residence designed to foster a community of scholars, where graduate students from multiple disciplines can live and exchange ideas. The gift includes US$10 million for graduate student fellowships.

In addition to the University of Michigan, Munger and his late wife Nancy B. Munger have been major benefactors of Stanford University. Nancy Munger was an alumna of Stanford, and Wendy Munger, Charlie Munger’s daughter from a previous marriage, was also an alumna (A.B. 1972). Both Nancy and Wendy Munger served as members of the Stanford board of trustees. In 2004, the Mungers donated 500 shares of Berkshire Hathaway Class A stock, then valued at $43.5 million, to Stanford to build a graduate student housing complex.

The Munger Graduate Residence opened in late 2009 and now houses 600 law and graduate students. The Mungers gave a major gift to Stanford’s Green Library to fund the restoration of the Bing Wing as well as the construction of a rotunda on the library’s second floor, and endowed the Munger Chair in Nancy and Charles Munger Professorship of Business at Stanford Law School.

In 1997, the Mungers donated $1.8 million to the Marlborough School in Los Angeles, of which Nancy Munger was an alumna. The couple also donated to the Polytechnic School in Pasadena and the Los Angeles YMCA.

Munger has been a trustee of the Harvard-Westlake School in Los Angeles for more than 40 years, and previously served as chair of the board of trustees. His five sons and stepsons as well as at least one grandson graduated from the prep school. In 2009, Munger donated eight shares of Berkshire Hathaway Class A stock, worth nearly $800,000, to Harvard-Westlake. In 2006, Munger donated 100 shares of Berkshire Hathaway Class A stock, then valued at $9.2 million, to the school toward a building campaign at Harvard-Westlake’s middle school campus. The Mungers had previously made a gift to build the $13 million Munger Science Center at the high school campus, a two-story classroom and laboratory building which opened in 1995 and has been described as “a science teacher’s dream”. The design of the Science Center was substantially influenced by Munger.

In October 2014, Munger announced that he would donate $65 million to the Kavli Institute for Theoretical Physics at the University of California, Santa Barbara. This is the largest gift in the history of the school. The donation will go towards the construction of a residence building for visitors of the Kavli Institute in an effort to bring together physicists to exchange ideas as Munger stated,”to talk to one another, create new stuff, cross-fertilize ideas”.

In March 2016, Munger announced a further $200 million gift to UC Santa Barbara for state of the art student housing, tripling the record gift he gave for the Kavli Institute for Theoretical Physics.

Munger has not signed The Giving Pledge that was started by his partner Warren Buffett and Co-Director, Bill Gates, and has stated that he “can’t do it” because ” already transferred so much to children that already violated it.”