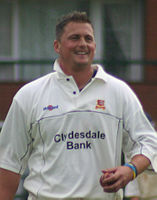 Darren Gough (born 18 September 1970) is a retired English cricketer and former captain of Yorkshire County Cricket Club. The spearhead of England’s bowling attack through much of the 1990s, he is England’s second highest wicket-taker in one-day internationals with 234, and took 229 wickets in his 58 Test matches, making him England’s ninth most successful wicket-taker.

Gough was a right arm fast bowler and right-handed batsman. 1.80 m (5′ 11″) and broad in beam, he achieved his pace from a good approach to the wicket and a leaping sideways-on action, achieving what was often described as “skiddy” fast bowling. Capable of swinging the ball late, a large number of his wickets were gained through lbw or bowled, often with an inswinging yorker delivery.

Gough retired at the end of the 2008 cricket season with Justin Langer as his final first-class wicket. Langer commented in his BBC column that “Darren Gough will retire as one of the most respected and admired cricketers of our generation”, also noting that Gough had commented to Langer after his final match “I am happy to finish with an Aussie in my pocket.” Gough retired on a high being regarded as a model professional and a Yorkshire legend. Gough after retirement, in April 2009

Gough was considered to be a budding young footballer and appeared many times for a YTS team before he embarked on his cricketing career. He frequently refers to his ability as a footballer as a presenter of Talksport‘s flagship Drivetime programme and demonstrates immense pride at “playing football at a high level”. The initial steps of Gough’s first-class cricketing life, according to his autobiography, were marked by a lack of discipline, thrust and ambition.

In May 1993, however, during a match for Yorkshire against Hampshire at Southampton, he shifted his mindset completely. With the hosts well into their second innings, and Gough beginning to jade, he found himself with four wickets and a choice: he must either disregard his bodily protests and go for the five-for, or he must lower his speed and safeguard his analysis. The latter had characterised his approach in most such scenarios hitherto, and he duly went with it until Richie Richardson, Yorkshire’s foreign signing, told him to engage the former.

Having played through one of the greatest epochs of West Indian cricket, characterised by a pace attack regarded by many as the finest ever, Richardson was well placed to convey such wisdom. Gough took it, claimed his five-for and quickly realised that bowling fast and taking wickets was far more suited to his talents and personality. The new philosophy typified the remainder of his career.

He was first selected for the England cricket team in 1994, playing both Test and One Day International cricket. Four first-innings wickets and an innings of 65 on Test debut showed his potential, and the media, as is usual with practically any aggressive England all-rounder, quickly dubbed him the “new Botham“. Like most such pretenders to that throne, he did not fully ascend to such lofty heights: his batting fell away, and he eventually averaged only 12 with the bat in Tests. Nonetheless, his continued presence in the England team became a vital one in both personality and play. Memorable highlights of his Test career included taking the 23rd hat-trick in Test cricket against Australia at Sydney in 1999. His only first-class century came against Warwickshire in 1996 at Headingley.

He retired from Test cricket in 2003 after a knee injury threatened to end his career, having taken 229 wickets with a bowling average of 28.39. He has continued playing one-day international cricket, and became the first Englishman to take 200 wickets in one-day cricket in September 2004. In January 2005, he played for the World XI in the World Cricket Tsunami Appeal one-day international versus the Asian XI.

Gough asked not to be considered for selection for England’s tour of Pakistan in October-December 2005 so that he could spend more time with his family. Selectors were content with his decision until it was discovered that he had signed up to take part in the BBC television show Strictly Come Dancing, of which he was the celebrity winner.

He was subsequently omitted from the ODI party to tour India in February and March 2006, prompting renewed speculation that his career was at an end. However, he was named as a member of the ODI squad to play Pakistan in August 2006, playing two ODIs and one Twenty20 International, before a shin injury forced him to withdraw from the team. Cricket writer Tim de Lisle claimed in a column for Cricinfo that after this, ” international career all but over”. He played county cricket for Yorkshire for 15 years before moving to Essex in 2004 due mainly to family reasons. He returned to Yorkshire for the 2007 season as their captain stating “They know I’ll run through brick walls for Yorkshire. I’ve come home”. He joined Matthew Hoggard in a seemingly formidable Yorkshire attack.

His reign as captain of Yorkshire got off to a flier. His opening five games saw three convincing Championship wins (versus Surrey, Durham and Worcestershire) and two one-day victories (versus Notts and Scotland).

Gough suffered a broken hand in June 2007 whilst achieving his best Yorkshire figures in 11 years. He took 6-47 before taking a blow from Kent’s Ryan McLaren, attempting to stop a straight drive off his own bowling. Despite suffering the injury, Gough bowled on briefly, taking the wicket of culprit McLaren.

In December 2005, Gough took part in the BBC television show Strictly Come Dancing, partnered with British National champion Lilia Kopylova. Gough noted that this would keep him fit whilst allowing him to spend the winter with his family and, visibly at least, had the support of his England colleagues. He went on to win both the main series and the 2005 Christmas Special. Two years later he returned to win the 2007 Christmas Special. Following this he took part in the Strictly Come Dancing live tour during January and February 2008.

In 2010, Gough became the face of UK supermarket chain ‘Costcutter’. Regularly featuring in their promotional trails on television. As an outspoken fan, Gough became the brand ambassador for Collier’s Powerful Welsh cheddar in 2010 making a number of appearances notably at the International Cheese Awards in Nantwich.

Darren and his wife Anna divorced in 2002, after 8 years of marriage but are now reconciled (Daily Telegraph 21 May 2009). They have two sons, Liam and Brennan. He served as the captain on one of the teams on the UK version of Hole in the Wall on the first series of the programme and as a captain of one of the teams in the third episode and the final of Sing If You Can. Gough now appears on Talksport, co-presenting the weekday afternoon drivetime show with Adrian Durham. His first show was broadcast on 20 March 2009. He was Kevin Pietersen‘s best man at his wedding. He supports Barnsley F.C. & Tottenham Hotspur F.C. & Milton Keynes Dons F.C..

In July 2009, Gough revealed himself to be a supporter of the Conservative Party and offered his support to Nigel Adams’ parliamentary campaign for Selby and Ainsty. He was invited by David Cameron to be the Conservative Party candidate in the Barnsley Central by-election in February 2011, but declined due to other commitments. Initially Gough thought the invitation was a hoax and put the phone down. Cameron had to call again to confirm the invitation was genuine. Gough turned down the invitation, but made himself available to support the Tories during the by-election campaign.