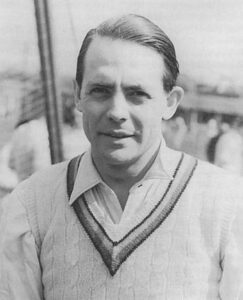 David Stuart Sheppard, Baron Sheppard of Liverpool (6 March 1929 – 5 March 2005) was the high-profile Bishop of Liverpool in the Church of England who played cricket for Sussex and England in his youth. Sheppard remains the only ordained minister to have played Test cricket, though others such as Tom Killick were ordained after playing Tests.

Sheppard was born in Reigate,Surrey. His parents were Stuart Morton Winter Sheppard (1895-1937) and Barbara Sheppard (ne Shepherd). He is a direct descendant of William Shepherd (1735-1814), his grandfather four times removed. His father was a solicitor, and a cousin of Tubby Clayton, founder of Toc H; his mother was the daughter of the artist and illustrator, James Affleck Shepherd (1867-1946). His family moved to Sussex after his father died in the late 1930s.

He was educated at Northcliffe House School in Bognor Regis and then at Sherborne School, Dorset, where his cricketing talent first emerged. After National Service as a second lieutenant in the Royal Sussex Regiment, he then went up to read history at Trinity Hall, Cambridge, in 1947, and started to play first-class cricket.

Sussex were the runners-up in the County Championship in 1953, and Sheppard was one of the Wisden Cricketers of the Year that year. In 1954 he captained England in two Tests against Pakistan in the absence of Len Hutton. He won one Test and drew the other, but the series ended in a 1-1 draw. Sheppard was a favourite with the Old Guard at Lord’s, who had wanted him to captain the tour of Australia in 1954-55 instead of the Yorkshire professional Hutton, but this came to naught. Sheppard was already progressing his clerical career and declined to tour unless required as a captain. In 1956 he was recalled to play Australia and made 113 in the Fourth Test at Old Trafford, where Jim Laker famously took 19 wickets and England won by an innings. He refused to play against the touring South Africans in 1960, and was a vocal opponent of the proposed MCC tour in 1968-69 which was ultimately cancelled after the South African government refused to allow Basil D’Oliveira to play.

On top of all this we were besieged by clergymen eager to meet the Reverend David Sheppard … In no time at all the news in the press concerning the England team centred on … where David Sheppard was sermonizing.

Sheppard was willing to take a sabbatical from his church mission in the East End in order to tour Australia in 1962-63. His many friends at Lord’s wanted him to captain the Fourth and Fifth Tests against Pakistan in 1962, but Sheppard had not played serious cricket for years. He made 112 for the Gentlemen and was chosen for the tour, but Ted Dexter was confirmed as captain for the remainder of the home series and the forthcoming tour of Australia. Sheppard agreed to tour and “the presence in the pulpit of David Sheppard…filled the Anglican cathedral of every state capital from Perth to Brisbane” Sheppard made 0 and 113 in the victorious Second Test at Melbourne, but dropped two catches and was dropped himself when he was on a pair in the second innings. He ran out his captain Ted Dexter, took a risky single for the winning run and was run out by Bill Lawry so that Ken Barrington had to come out to see Colin Cowdrey make the winning single. Although he held some good catches on the tour “the ones I dropped were at such vital moments”,Richie Benaud and Bill Lawry in the Second Test and Neil Harvey in the Fourth Test off Trueman, who told him “The only time your hands are together are on Sunday”. This is a story that increased with the telling, another version being “Pretend it’s Sunday Reverend, and keep your hands together”, or that it was Sheppard who said “Sorry Fred, I should have kept my hands together”. One couple in Australia asked Mrs Sheppard if the Reverend could christen their baby, but she advised them not to as he was bound to drop it.

Sheppard played his last Tests against New Zealand in early 1963.

Sheppard was converted to evangelical Christianity whilst at Cambridge, influenced by Donald Grey Barnhouse, and trained for the ministry at Ridley Hall, Cambridge from 1953 to 1955, where he attended the lectures of Owen Chadwick and Maurice Wiles, and was much impressed by a visiting lecturer, Donald Soper. He was involved with the ministry of E. J. H. Nash. He was ordained in 1955, serving his title as curate at St Mary’s Church, Islington, but continued to play Test cricket sporadically until 1963, being the first ordained minister to do so. From early 1958, he and his wife lived in Canning Town, working at the Mayflower Family Centre.

Sheppard became Bishop of Woolwich (a suffragan bishop in the Diocese of Southwark) in 1969, and Bishop of Liverpool in 1975. When installed as Bishop of Liverpool, he was the youngest diocesan bishop in England. He was an active broadcaster and campaigner, especially on the subjects of poverty and social reform in the inner cities, and opposition to apartheid and the tour to England by the South Africa national cricket team scheduled in 1970.

Sheppard worked closely with the Roman Catholic Archbishop of Liverpool, Derek Worlock, on these issues, and was often an outspoken critic of Margaret Thatcher’s government. The Queen visited both Liverpool cathedrals in 1978 to celebrate the long-delayed completion of the Anglican cathedral, and Pope John Paul II visited both cathedrals during his tour of England in 1982. The bishops worked together in the aftermath of the 1981 Toxteth riots, the 1985 Heysel stadium disaster and the 1989 Hillsborough Stadium disaster. Sheppard also worked with other church leaders in Liverpool, including the Methodist chairman John Newton. He gave the Dimbleby Lecture in 1984, on “The Other Britain”. In 1985 he was appointed as a member of the Archbishop of Canterbury’s Commission on Urban Priority Areas, culminating in the publishing of the controversial report “Faith in the City”. He was national president of Family Service Units from 1987 and chaired the religious advisory committee for the BBC and IBA from 1989 to 1993.

Sheppard retired in 1997, and in the 1998 New Year Honours was elevated to a life peerage, taking the title Baron Sheppard of Liverpool, of West Kirby in the County of Merseyside. He sat in the House of Lords on the Labour benches.

Beginning in the mid-1950s, Sheppard wrote a weekly column for Woman’s Own, 520 words a week, “trying to make one point that had something to say about the everyday God in an accessible way”. His column continued for 17 years. He wrote several books: Built As a City in 1974 about urban mission, Bias to the Poor in 1983, and two autobiographies, Parson’s Pitch in 1964 and Steps Along Hope Street in 2002 (named after the street in Liverpool which links the Anglican and Roman Catholic cathedrals).

Sheppard had a long and happy marriage to his wife Grace (ne Isaac), whom he met at Cambridge. His wife was the daughter of a clergyman. They were married in 1957. Their only child, Jenny (now Sinclair), was born in 1962; she was later received into the Roman Catholic Church, but the family did not become estranged. Lady Sheppard died of cancer on 10 November 2010, aged 75.

In December 2003, Sheppard announced that he had been suffering from colorectal cancer for the previous two years. He died on 5 March 2005, the day before what would have been his 76th birthday. He was survived by his wife and daughter. After a funeral near his retirement home at West Kirby on the Wirral, his ashes were buried in Liverpool Cathedral, with a memorial service at the cathedral in May 2005.

On Pentecost Sunday, 11 May 2008, during the Christian Walk of Witness, a memorial statue, the Sheppard-Worlock Statue in the form of two bronze doors, was unveiled to honour both Sheppard and Archbishop Derek Worlock. The memorial was designed by notable sculptor Stephen Broadbent and funded by public donations. The memorial is situated halfway down Hope Street, in sight of the Anglican and Catholic cathedrals in Liverpool.

The official biography of Bishop Sheppard by Andrew Bradstock of the University of Winchester, entitled Batting for the Poor, was published by SPCK on 21 November 2019.