Edward Jenner  (17 May 1749 – 26 January 1823) was an English physician who was a contributor of the smallpox vaccine. The practice was popularized by Jenner and was hence used ubiquitously until now to prevent several diseases. The terms vaccine and vaccination are derived from Variolae vaccinae (smallpox of the cow), the term devised by Jenner to denote cowpox. He used it in 1798 in the long title of his Inquiry into the Variolae vaccinae known as the Cow Pox, in which he described the protective effect of cowpox against smallpox.

Jenner is often called a pioneer of immunization. Using a method valid in immunology before the discovery of germ theory, his work saved many lives. In Jenner’s time, smallpox killed around 10% of the British population, with the number as high as 20% in towns and cities where infection spread more easily. In 1821, he was appointed physician extraordinary to King George IV, and was also made mayor of Berkeley and justice of the peace. A member of the Royal Society, in the field of zoology he was the first person to describe the brood parasitism of the Cuculus canorus. In 2002, Jenner was named in the BBC’s list of the 100 Greatest Britons. 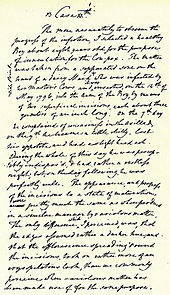 Edward Jenner was born on 17 May 1749 (6 May Old Style) in Berkeley, Gloucestershire, as the eighth of nine children. His father, the Reverend Stephen Jenner, was the vicar of Berkeley, so Jenner received a strong basic education.

He went to school in Wotton-under-Edge at Katherine Lady Berkeley’s School and in Cirencester. During this time, he was inoculated for smallpox, which had a lifelong effect upon his general health. (Crucially this meant that he underwent variolation and not vaccination.) At the age of 14, he was apprenticed for seven years to Daniel Ludlow, a surgeon of Chipping Sodbury, South Gloucestershire, where he gained most of the experience needed to become a surgeon himself. 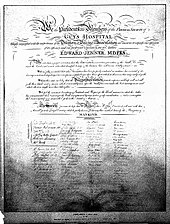 Jenner’s 1802 testimonial to the efficacy of vaccination, signed by 112 members of the Physical Society, London

In 1770, Jenner became apprenticed in surgery and anatomy under surgeon John Hunter and others at St George’s Hospital.William Osler records that Hunter gave Jenner William Harvey’s advice, well known in medical circles (and characteristic of the Age of Enlightenment), “Don’t think; try.” Hunter remained in correspondence with Jenner over natural history and proposed him for the Royal Society. Returning to his native countryside by 1773, Jenner became a successful family doctor and surgeon, practising on dedicated premises at Berkeley.

Jenner and others formed the Fleece Medical Society or Gloucestershire Medical Society, so called because it met in the parlour of the Fleece Inn, Rodborough (in Gloucestershire). Members dined together and read papers on medical subjects. Jenner contributed papers on angina pectoris, ophthalmia, and cardiac valvular disease and commented on cowpox. He also belonged to a similar society which met in Alveston, near Bristol.

Edward Jenner was elected fellow of the Royal Society in 1788, following his publication of a careful study of the previously misunderstood life of the nested cuckoo, a study that combined observation, experiment, and dissection.

He described how the newly-hatched cuckoo pushed its host’s eggs and fledgling chicks out of the nest (contrary to existing belief that the adult cuckoo did it). Having observed this behaviour, Jenner demonstrated an anatomical adaptation for itthe baby cuckoo has a depression in its back, not present after 12 days of life, that enables it to cup eggs and other chicks. The adult does not remain long enough in the area to perform this task. Jenner’s findings were published in Philosophical Transactions of the Royal Society in 1788.

“The singularity of its shape is well adapted to these purposes; for, different from other newly hatched birds, its back from the scapula downwards is very broad, with a considerable depression in the middle. This depression seems formed by nature for the design of giving a more secure lodgement to the egg of the Hedge-sparrow, or its young one, when the young Cuckoo is employed in removing either of them from the nest. When it is about twelve days old, this cavity is quite filled up, and then the back assumes the shape of nestling birds in general.”  Jenner’s nephew assisted in the study. He was born on 30 June 1737.

Jenner’s understanding of the cuckoo’s behaviour was not entirely believed until the artist Jemima Blackburn, a keen observer of bird life, saw a blind nestling pushing out a host’s egg. Her description and illustration of this were enough to convince Charles Darwin to revise a later edition of On the Origin of Species.

Jenner’s interest in Zoology played a large role in his first experiment with inoculation. Not only did he have a profound understanding of human anatomy due to his medical training, but he also understood animal biology and its role in human-animal trans-species boundaries in disease transmission. At the time there was no way of knowing how important this connection would be to the history and discovery of vaccinations. We see this connection now; many present day vaccinations include animal parts from cows, rabbits, and chicken eggs, which can be attributed to the work of Jenner and his cowpox/smallpox vaccination. 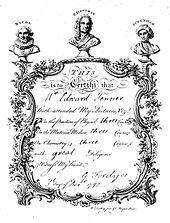 A lecturer’s certificate of attendance given to Jenner. He attended many lectures on chemistry, medicine and physics.

Jenner married Catherine Kingscote (died 1815 from tuberculosis) in March 1788. He might have met her while he and other fellows were experimenting with balloons. Jenner’s trial balloon descended into Kingscote Park, Gloucestershire, owned by Anthony Kingscote, one of whose daughters was Catherine.

He earned his MD from the University of St Andrews in 1792. He is credited with advancing the understanding of angina pectoris. In his correspondence with Heberden, he wrote, “How much the heart must suffer from the coronary arteries not being able to perform their functions.”

Invention of the vaccine 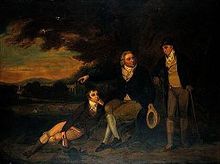 Edward Jenner Advising a Farmer to Vaccinate His Family. Oil painting by an English painter, c. 1910 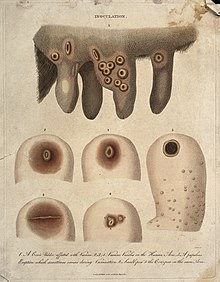 Jenner’s discovery of the link between cowpox pus and smallpox in humans helped him to create the smallpox vaccine.

Inoculation was already a standard practice but involved serious risks, one of which was the fear that those inoculated would then transfer the disease to those around them due to their becoming carriers of the disease. In 1721, Lady Mary Wortley Montagu had imported variolation to Britain after having observed it in Constantinople. While Johnnie Notions had great success with his self-devised inoculation (and was reputed not to have lost a single patient), his method’s practice was limited to the Shetland Isles. Voltaire wrote that at this time 60% of the population caught smallpox and 20% of the population died of it. Voltaire also states that the Circassians used the inoculation from times immemorial, and the custom may have been borrowed by the Turks from the Circassians.

The steps taken by Edward Jenner to create vaccination, the first vaccine for smallpox. Jenner did this by inoculating James Phipps with cowpox, a virus similar to smallpox, to create immunity, unlike variolation, which used smallpox to create an immunity to itself.

By 1768, English physician John Fewster had realised that prior infection with cowpox rendered a person immune to smallpox. In the years following 1770, at least five investigators in England and Germany (Sevel, Jensen, Jesty 1774, Rendell, Plett 1791) successfully tested in humans a cowpox vaccine against smallpox. For example, Dorset farmer Benjamin Jesty successfully vaccinated and presumably induced immunity with cowpox in his wife and two children during a smallpox epidemic in 1774, but it was not until Jenner’s work that the procedure became widely understood. Jenner may have been aware of Jesty’s procedures and success. A similar observation had also been made in France by Jacques Antoine Rabaut-Pommier in 1780.

Jenner’s Hypothesis:The initial source of infection was a disease of horses, called “the grease”, which was transferred to cattle by farm workers, transformed, and then manifested as cowpox. 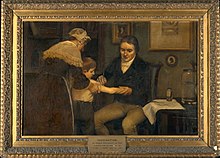 Dr Jenner performing his first vaccination on James Phipps, a boy of age 8. 14 May 1796

On 14 May 1796, Jenner tested his hypothesis by inoculating James Phipps, an eight-year-old boy who was the son of Jenner’s gardener. He scraped pus from cowpox blisters on the hands of Sarah Nelmes, a milkmaid who had caught cowpox from a cow called Blossom, whose hide now hangs on the wall of the St George’s medical school library (now in Tooting). Phipps was the 17th case described in Jenner’s first paper on vaccination.

Jenner inoculated Phipps in both arms that day, subsequently producing in Phipps a fever and some uneasiness, but no full-blown infection. Later, he injected Phipps with variolous material, the routine method of immunization at that time. No disease followed. The boy was later challenged with variolous material and again showed no sign of infection.

Donald Hopkins has written, “Jenner’s unique contribution was not that he inoculated a few persons with cowpox, but that he then proved that they were immune to smallpox. Moreover, he demonstrated that the protective cowpox pus could be effectively inoculated from person to person, not just directly from cattle.” Jenner successfully tested his hypothesis on 23 additional subjects. 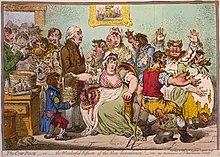 James Gillray’s 1802 caricature of Jenner vaccinating patients who feared it would make them sprout cowlike appendages. 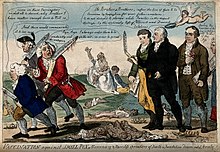 Jenner continued his research and reported it to the Royal Society, which did not publish the initial paper. After revisions and further investigations, he published his findings on the 23 cases, including his 11 months old son Robert. Some of his conclusions were correct, some erroneous; modern microbiological and microscopic methods would make his studies easier to reproduce. The medical establishment deliberated at length over his findings before accepting them. Eventually, vaccination was accepted, and in 1840, the British government banned variolation – the use of smallpox to induce immunity – and provided vaccination using cowpox free of charge. (See Vaccination acts).

The success of his discovery soon spread around Europe and was used en masse in the Spanish Balmis Expedition (1803-1806), a three-year-long mission to the Americas, the Philippines, Macao, China, led by Dr. Francisco Javier de Balmis with the aim of giving thousands the smallpox vaccine. The expedition was successful, and Jenner wrote, “I dont imagine the annals of history furnish an example of philanthropy so noble, so extensive as this.”Napoleon, who at the time was at war with Britain, had all his French troops vaccinated, awarded Jenner a medal, and at the request of Jenner he released two English prisoners of war and permitted their return home. Napoleon remarked he could not “refuse anything to one of the greatest benefactors of mankind.” 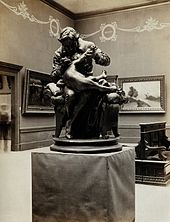