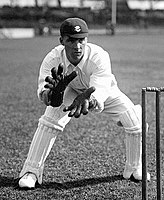 Herbert “Bert” Strudwick (28 January 1880 – 14 February 1970) was an English wicket-keeper . During his career, his record of 1493 dismissals is the third-highest by any wicket-keeper in the history of first-class cricket.

Not much of a batsman, he nonetheless twice added over 100 for the last wicket with Bill Hitch (one of only four pairs with more than one tenth-wicket century stand in first-class cricket).

Born in Mitcham, Surrey, Strudwick took to wicket-keeping, apparently on the advice of a local lady, at the age of ten. He first played for Surrey in a few games in 1902, but during his first full season the following year dismissed a record 91 batsmen (71 catches and 20 stumpings) – a feat made more remarkable by the decline of Surrey’s top fast bowlers Tom Richardson and William Lockwood and the exceptionally wet weather of that summer. From that time on, Strudwick became regarded as the natural successor to Dick Lilley as England’s Test wicket-keeper, and he toured Australian in 1903/1904 without playing a Test.

Continuing his good form, Strudwick maintained his place among the top wicket-keepers right through the 1900s and played his first Test in 1909/1910 against South Africa. In 1911, though overshadowed in county cricket by Kent veteran Fred Huish, Studwick was chosen as the first-choice wicket-keeper to Australia because of his relative youth and did not disappoint, taking the bowling of Frank Foster and Sydney Barnes with skill. His skill was seen to even greater effect taking Barnes on the matting wickets of South Africa in 1914: with Barnes’ bowling bouncing and turning. In the following season, Strudwick’s skill was an essential part of Surrey’s success in winning the County Championship for the only time during his career.

After World War I halted county cricket, Strudwick re-established himself in the England side until he retired in 1927 – though he was dropped to improve the batting during the disastrous 1921 series against Armstrong’s Australian. After his playing days he became a respected coach and for many years was the Surrey scorer.

In his later years Strudwick, renowned for his abstinence from tobacco and alcohol at a time when the health of sportsmen was not taken seriously, wrote many articles about the game in Wisden. The most famous of these is From Dr. Grace to Peter May in the 1959 Wisden, which outlines how Strudwick saw the game both during his career and as a spectator after retiring. He died in Shoreham-by-Sea, Sussex, aged 90.