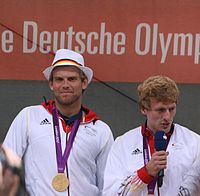 Moritz Frste (born 28 October 1984) is a German field hockey player. He was a member of the Men’s National Team that won the gold medal at the 2008 Summer Olympics and 2012 Summer Olympics as well as at the 2006 World Cup. He played at the Uhlenhorster Hockey Club in Hamburg from 1989 till 2012. He was captain of the team. He has guided his team to success in the Euro Hockey League on three occasions, winning the title in 2007-2008, 2009-2010 and 2011-12. Frste also helped his team to a second-place finish in the competition in the 2008-2009 Season, when they were defeated by HC Bloemendaal of The Netherlands. Since 2012 he is playing at Spanish Club de Campo Villa de Madrid.

At the inaugural season of the Hockey India League, Frste was named one of the six marquee players. At the player’s auction, he was bought by Ranchi Rhinos for US$75,500, with his base price being US$25,000. He captained the team to a first-place finish in the season. In the second season, Rhinos finished third. Following the franchise’s withdrawal from the League, the entire team was drafted under a new franchise and team named Ranchi Rays, for the third season. Frste, however, pulled out of the tournament to represent his country at the 2015 Indoor World Cup.

At the 2015 players’ auctions, he was bought by Kalinga Lancers for US$105,000, from a base price of US$30,000. His team finished fifth in the round-robin stage and failed to enter the knock-out stage. In the 2016 season, he scored the team’s lone goal in a 6-1 loss to Punjab Warriors in the final. Reaching the final again in the 2017 season, he scored twice from penalty corner in the final, in the 30th and 59th minutes to beat Dabang Mumbai 4-1. With 12 goals that included 11 penalty corner conversions and one field goal to his name, he emerged as the tournament’s top-scorer alongside teammate Glenn Turner.