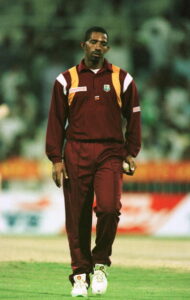 Philip Verant Simmons (born 18 April 1963) is a Trinidadian cricket coach and former cricketer who was an all-rounder played as an opening batsman, a medium-fast bowler and a slip fielder. He is the current coach of the West Indies cricket team.

Simmons’ first home was in Arima, Trinidad, a few miles outside Port of Spain. He lived just two doors down from Larry Gomes, a former West Indian batsman. He proved to be adept at a number of sports, but excelled at cricket and was soon playing for the regional side East Zone. He made the leap to represent Trinidad and Tobago in 1983 with the help and encouragement of Rohan Kanhai, the coach at East Zone.

He played cricket for a number of first-class sides in the West Indies and England as well as international cricket for the West Indian cricket team. He was voted a Wisden Cricketer of the Year in 1997.

In his career in first-class cricket, he averaged 35.61 with the bat and 28.68 with the ball. During the 1996 season with Leicestershire, he accumulated 1244 runs and took 56 wickets and 35 catches, helping his side to win the County Championship that year for only the second time in their history.

However, like many cricketers before him, he found the transition to Test level difficult, although he proved more adept to at the international one day game by scoring 2 half centuries in w.c. 1987 at beginning of his O.D.I career ( 50 runs off 57 balls at his debut match vs Pakistan & 89 runs off 126 balls vs Sri Lanka. For the 1992 World Cup, Simmons played in 4 matches, (v Zimbabwe, he scored 21 runs off 45 balls, v India, he scored 20 runs off 22 balls, v Sri Lanka, he scored 110 runs off 125 balls and v Australia, he scored none). At Sharjah’s Champions Trophy tri-series in 1993, Simmons was named player of the series by scoring 3 half centuries and 330 runs for the series. For the 1995/96 World Series Cup, which also included hosts Australia and Sri Lanka, Simmons failed to impress through his all round performances which cost him his place for the World Cup which was held in Pakistan, India and Sri Lanka.

In December 1992, during the 8th match of the Benson & Hedges World Series tournament, Simmons won the Man of the Match award for his match-winning spell of 10 overs, 8 maidens, 3 runs, 4 wickets, with an economy of 0.30, against Pakistan. With this, Simmons holds the world record for most economical (conceding less runs) bowling in an ODI among those who completed their maximum quota of overs (10 overs in a 50-over match). In 1993’s Sharjah Champions Trophy tri-series which included Pakistan and Sri Lanka, Simmons scored 3 half centuries, 2 of them against Sri Lanka, 92 runs off 161 balls and 90 runs off 109 balls and 1 against Pakistan, 81 runs off 94 balls. Simmons was named player of the series for his 330 runs with the bat.

During a 1988 tour match against Gloucestershire on his debut tour of England, he was struck on the head by a fast ball from David Lawrence in bad light at Bristol. His heart stopped and he required emergency surgery at Frenchay Hospital, from which he recovered fully.

Simmons retired from playing in 2002, then embarked on a successful coaching career. He was first appointed as the head coach to the Zimbabwe cricket team in 2004. This proved a difficult and controversial job, not least because he inherited a team heavily weakened thanks to the mass dismissal of most of the senior players.

He found himself having to defend the Test status of his country after an appalling losing streak, including a loss to Bangladesh who were widely seen as the worst Test side in the world. The Zimbabwe cricket union made him a scapegoat for the problems in the side and he was sacked under farcical conditions in August 2005 after persistent rumours of his impending dismissal. The official notice of his removal was dated two days before it was actually released. Many commentators felt that he was simply too kindly and naive to have succeeded in such a difficult position.

During that time, Ireland won 11 trophies, qualified for every major ICC event, and achieved victories over Pakistan and Bangladesh at the 2007 World Cup, England at the 2011 World Cup and the West Indies and Zimbabwe at the 2015 World Cup.

In March 2015, he accepted an offer to coach to take charge of his native West Indies after the conclusion of the 2015 World Cup. WICB chief executive Michael Muirhead said of his signing, “Phil has a proven ability to develop players, while cultivating great team spirit and a winning culture, we have a number of young, talented players about whom he is excited to be coaching and we believe he is the right fit”.

In 2016 he led the West Indies team to a historic second T20 world cup victory in India. At the time the former top ranking cricket team was in a period of significant struggles, and he was tasked with bringing the team from near the bottom of the top ten rankings and back into prominence.