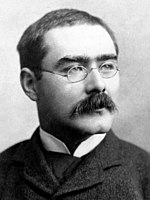 Kipling was one of the most popular writers in the United Kingdom, in both prose and verse, in the late 19th and early 20th centuries.Henry James said: “Kipling strikes me personally as the most complete man of genius, as distinct from fine intelligence, that I have ever known.” In 1907, at the age of 42, he was awarded the Nobel Prize in Literature, making him the first English-language writer to receive the prize and its youngest recipient to date. He was also sounded out for the British Poet Laureateship and on several occasions for a knighthood, both of which he declined.

Kipling’s subsequent reputation has changed according to the political and social climate of the age and the resulting contrasting views about him continued for much of the 20th century.George Orwell saw Kipling as “a jingo imperialist”, who was “morally insensitive and aesthetically disgusting”. Literary critic Douglas Kerr wrote: ” is still an author who can inspire passionate disagreement and his place in literary and cultural history is far from settled. But as the age of the European empires recedes, he is recognised as an incomparable, if controversial, interpreter of how empire was experienced. That, and an increasing recognition of his extraordinary narrative gifts, make him a force to be reckoned with.”

Kipling kept writing until the early 1930s, but at a slower pace and with much less success than before. On the night of 12 January 1936 he suffered a haemorrhage in his small intestine. He underwent surgery but died less than a week later on 18 January 1936, at the age of 70 of a perforated duodenal ulcer. His death had in fact previously been incorrectly announced in a magazine, to which he wrote, “I’ve just read that I am dead. Don’t forget to delete me from your list of subscribers.”

The pallbearers at the funeral included Kipling’s cousin, the Prime Minister Stanley Baldwin, and the marble casket was covered by a Union Jack. Kipling was cremated at Golders Green Crematorium in northwest London, and his ashes interred at Poets’ Corner, part of the South Transept of Westminster Abbey, next to the graves of Charles Dickens and Thomas Hardy.

In 2010, the International Astronomical Union approved that a crater on the planet Mercury would be named after Kiplingone of ten newly discovered impact craters observed by the MESSENGER spacecraft in 2008-9. In 2012, an extinct species of crocodile, Goniopholis kiplingi, was named in his honour, “in recognition for his enthusiasm for natural sciences”.

More than 50 unpublished poems by Kipling, discovered by the American scholar Thomas Pinney, were released for the first time in March 2013.

Various writers, such as Edmund Candler, were strongly influenced by Kipling’s writing. Kipling’s stories for adults remain in print and have garnered high praise from writers as different as Poul Anderson, Jorge Luis Borges, and Randall Jarrell who wrote that, “After you have read Kipling’s fifty or seventy-five best stories you realize that few men have written this many stories of this much merit, and that very few have written more and better stories.”

His children’s stories remain popular, and his Jungle Books have been made into several movies. The first was made by producer Alexander Korda, and other films have been produced by the Walt Disney Company. A number of his poems were set to music by Percy Grainger. A series of short films based on some of his stories was broadcast by the BBC in 1964. Kipling’s work is still popular today.

The poet T. S. Eliot edited A Choice of Kipling’s Verse (1941) with an introductory essay. Eliot was aware of the complaints that had been levelled against Kipling and he dismissed them one by one: that Kipling is ‘a Tory’ using his verse to transmit right wing political views, or ‘a journalist’ pandering to popular taste; while Eliot writes “I cannot find any justification for the charge that he held a doctrine of race superiority.” Eliot finds instead,

An immense gift for using words, an amazing curiosity and power of observation with his mind and with all his senses, the mask of the entertainer, and beyond that a queer gift of second sight, of transmitting messages from elsewhere, a gift so disconcerting when we are made aware of it that thenceforth we are never sure when it is not present: all this makes Kipling a writer impossible wholly to understand and quite impossible to belittle.

Of Kipling’s verse, such as his Barrack-Room Ballads, Eliot writes “of a number of poets who have written great poetry, only… a very few whom I should call great verse writers. And unless I am mistaken, Kipling’s position in this class is not only high, but unique.”

In response to Eliot, George Orwell wrote a long consideration of Kipling’s work for Horizon in 1942, noting that although as a “jingo imperialist” Kipling was “morally insensitive and aesthetically disgusting”, his work had many qualities which ensured that while “every enlightened person has despised him … nine-tenths of those enlightened persons are forgotten and Kipling is in some sense still there”. Orwell said:

One reason for Kipling’s power his sense of responsibility, which made it possible for him to have a world-view, even though it happened to be a false one. Although he had no direct connection with any political party, Kipling was a Conservative, a thing that does not exist nowadays. Those who now call themselves Conservatives are either Liberals, Fascists or the accomplices of Fascists. He identified himself with the ruling power and not with the opposition. In a gifted writer this seems to us strange and even disgusting, but it did have the advantage of giving Kipling a certain grip on reality. The ruling power is always faced with the question, ‘In such and such circumstances, what would you do?‘, whereas the opposition is not obliged to take responsibility or make any real decisions. Where it is a permanent and pensioned opposition, as in England, the quality of its thought deteriorates accordingly. Moreover, anyone who starts out with a pessimistic, reactionary view of life tends to be justified by events, for Utopia never arrives and ‘the gods of the copybook headings’, as Kipling himself put it, always return. Kipling sold out to the British governing class, not financially but emotionally. This warped his political judgement, for the British ruling class were not what he imagined, and it led him into abysses of folly and snobbery, but he gained a corresponding advantage from having at least tried to imagine what action and responsibility are like. It is a great thing in his favour that he is not witty, not ‘daring’, has no wish to pater les bourgeois. He dealt largely in platitudes, and since we live in a world of platitudes, much of what he said sticks. Even his worst follies seem less shallow and less irritating than the ‘enlightened’ utterances of the same period, such as Wilde’s epigrams or the collection of cracker-mottoes at the end of Man and Superman.

The poet Alison Brackenbury writes that “Kipling is poetry’s Dickens, an outsider and journalist with an unrivalled ear for sound and speech.”

The English folk singer Peter Bellamy was a great lover of Kipling’s poetry, much of which he believed to have been influenced by English traditional folk forms. He recorded several albums of Kipling’s verse set to traditional airs, or to tunes of his own composition written in traditional style. However, in the case of the bawdy folk song, “The Bastard King of England”, which is commonly credited to Kipling, it is believed that the song is actually misattributed.

Kipling is often quoted in discussions of contemporary political and social issues. Political singer-songwriter Billy Bragg, who attempts to reclaim English nationalism from the right-wing, has reclaimed Kipling for an inclusive sense of Englishness. Kipling’s enduring relevance has been noted in the United States, as it has become involved in Afghanistan and other areas about which he wrote.

Links with camping and Scouting

In 1903, Kipling gave permission to Elizabeth Ford Holt to borrow themes from the Jungle Books to establish Camp Mowglis, a summer camp for boys on the shores of Newfound Lake in New Hampshire. Throughout their lives, Kipling and his wife Carrie maintained an active interest in Camp Mowglis, which is still in operation and continues the traditions that Kipling inspired. Buildings at Mowglis have names such as Akela, Toomai, Baloo, and Panther. The campers are referred to as “the Pack,” from the youngest “Cubs” to the oldest campers living in “Den.”

Kipling’s links with the Scouting movements were also strong. Robert Baden-Powell, the founder of Scouting, used many themes from The Jungle Book stories and Kim in setting up his junior movement, the Wolf Cubs. These connections still exist today, such as the continued popularity of “Kim’s Game” in the Scouting movement. The movement is named after Mowgli’s adopted wolf family, and the adult helpers of Wolf Cub Packs adopt names taken from The Jungle Book, especially the adult leader who is called Akela after the leader of the Seeonee wolf pack.

Bateman’s, Kipling’s home in Burwash, East Sussex, is now a public museum dedicated to the author.

After the death of Kipling’s wife in 1939, his house, “Bateman’s” in Burwash, East Sussex, South East England, where he had lived from 1902 until 1936, was bequeathed to the National Trust and is now a public museum dedicated to the author. Elsie Bambridge, his only child who lived to maturity, died childless in 1976, and also bequeathed her copyrights to the National Trust, which in turn donated them to the University of Sussex to ensure better public access.

Novelist and poet Sir Kingsley Amis wrote a poem, ‘Kipling at Bateman’s’, after visiting Kipling’s Burwash home (Amis’ father had lived in Burwash briefly in the 1960s) as part of a BBC television series on writers and their houses.

In 2003, actor Ralph Fiennes read excerpts from Kipling’s works from the study in Bateman’s, including, The Jungle Book, Something of Myself, Kim, and The Just So Stories, and poems, including “If… ” and “My Boy Jack”, for a CD published by the National Trust.

In modern-day India, whence he drew much of his material, Kipling’s reputation remains controversial, especially amongst modern nationalists and some post-colonial critics. Rudyard Kipling was a prominent supporter of Colonel Reginald Dyer, who was responsible for the Jallianwala Bagh massacre in Amritsar (in the province of Punjab). Kipling called Dyer “the man who saved India” and also initiated collections for the latter’s homecoming prize.

Other contemporary Indian intellectuals such as Ashis Nandy have taken a more nuanced view of his work. Jawaharlal Nehru, the first Prime Minister of independent India, often described Kipling’s novel Kim as one of his favourite books.

G V Desani, an Indian writer of fiction, had a more negative opinion of Kipling. He alludes to Kipling in his novel, All About H. Hatterr:

I happen to pick up R. Kipling’s autobiographical “Kim”.

Therein, this self-appointed whiteman’s burden-bearing sherpa feller’s stated how, in the Orient, blokes hit the road and think nothing of walking a thousand miles in search of something.

Indian writer Khushwant Singh wrote in 2001 that he considers Kipling’s “If” “the essence of the message of The Gita in English”, referring to the Bhagavad Gita, an ancient Indian scripture.

Indian writer R. K. Narayan said, “Kipling, the supposed expert writer on India, showed a better understanding of the mind of the animals in the jungle than of the men in an Indian home or the marketplace.”

In November 2007, it was announced that Kipling’s birth home in the campus of the J J School of Art in Mumbai would be turned into a museum celebrating the author and his works.