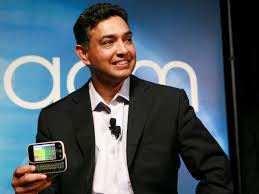 Sanjay Kumar Jha (born 1963) is the CEO of GlobalFoundries and former chairman and chief executive officer of Motorola Mobility. Prior to that he was the chief operating officer of Qualcomm.

On 7 January 2014 it was announced that Sanjay Jha would be the CEO of GlobalFoundries Inc. GlobalFoundries is a privately held company with its headquarters in Santa Clara, CA, USA. GlobalFoundries is the second largest semiconductor foundry business in the world with fabs in Malta (NY, USA), Dresden (Saxony, Germany), Singapore, East Fishkill (NY, USA) and Essex Junction (VT, USA).

On 4 August 2008 it was announced he would be the new CEO for the Motorola Mobile Devices business. He served in this role until 22 May 2012 when Dennis Woodside of Google took over the role of CEO at Motorola Mobility.

Jha began his career at Qualcomm in 1994 as a senior engineer with the Qualcomm very-large-scale integration group working on the Globalstar satellite phone, and later on the first 13k vocoder application-specific integrated circuit, which was integrated into Qualcomm’s MSM2200 chipset. In 1997, Jha was promoted to vice-president of engineering, where he was responsible for leading the integrated-circuit engineering group. Jha led and oversaw the development of five generations of modem and cell site chipsets, both digital baseband and RF (radio frequency), and system software. He was promoted to senior vice-president of engineering in 1998.

Jha serves two prominent industry roles in addition to his leadership at Qualcomm. In June 2005, he was elected to the board of directors of the Semiconductor Industry Association. He also serves as vice-chairman of the Fabless Semiconductor Association

After the Google acquisition of Motorola Mobility is complete, Jha would receive $13.20 million in cash and $52.5 million for his stock options and shares. The cash component of the Golden Parachute package included $10.8 million in severance pay and a $2.4 million bonus. The cash portion is equal to three times Jha’s base salary and bonus. Jha stepped down after the deal was completed on 22 May 2012.