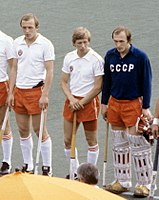 Sergei Mikhailovich Pleshakov (Russian : , born 2 November 1957) is a retired Russian field hockey defender. Together with his twin brother Vladimir he competed in the 1980, 1988 and 1992 Summer Olympics and won a bronze medal in 1980.