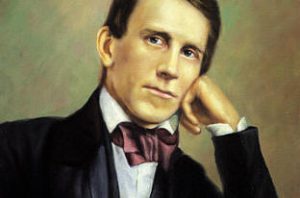 Stephen Collins Foster (July 4, 1826 – January 13, 1864), known as the “father of American music”, was an American songwriter primarily known for his parlour and minstrel music. Foster wrote over 200 songs; among his best known are “Oh! Susanna”, “Camptown Races”, “Old Folks at Home”, “My Old Kentucky Home”, “Jeanie with the Light Brown Hair”, “Old Black Joe”, “Massa’s in the Cold Ground”, “Nelly Bly”, “Old Uncle Ned” and “Beautiful Dreamer”. Many of his compositions remain popular more than 150 years after he wrote them.

Foster attended private academies in Allegheny, Athens and Towanda, Pennsylvania. He received an education in English grammar, diction, the classics, penmanship, Latin and Greek, and mathematics. In 1839, his elder brother William was serving his apprenticeship as an engineer at nearby Towanda and thought Stephen would benefit from being under his supervision. The site of the Camptown Races is 30 miles from Athens, and 15 miles from Towanda. Stephen attended Athens Academy from 1839 to 1841. He wrote his first composition, Tioga Waltz, while attending Athens Academy, and performed it during the 1841 commencement exercises; he was 14. It was not published during the composer’s lifetime, but it is included in the collection of published works by Morrison Foster. In 1842, Athens Academy was destroyed in a fire.

His education included a brief period at Jefferson College in Canonsburg, Pennsylvania (now Washington & Jefferson College). His tuition was paid, but Foster had little spending money. Sources conflict on whether he left willingly or was dismissed; but, either way, he left Canonsburg to visit Pittsburgh with another student and didn’t return.

During his teenage years, Foster was influenced greatly by two men. Henry Kleber (1816-1897), one of Stephens few formal music instructors, was a classically trained musician who emigrated from Darmstadt, Germany, to Pittsburgh and opened a music store. Dan Rice was an entertainer, a clown and blackface singer, making his living in traveling circuses. Although respectful of the more civilized parlor songs of the day, he and his friends would often sit at a piano, writing and singing minstrel songs through the night. Eventually, Foster learned to blend the two genres to write some of his best-known work.

In 1846, Foster moved to Cincinnati, Ohio, and became a bookkeeper with his brother’s steamship company. While in Cincinnati, Foster penned his first successful songs among them “Oh! Susanna,” which became an anthem of the California Gold Rush in 1848-1849. In 1849, he published Foster’s Ethiopian Melodies, which included the successful song Nelly Was a Lady, made famous by the Christy Minstrels. A plaque marks the site of Foster’s residence in Cincinnati, where the Guilford School building is now located.
Then he returned to Pennsylvania and signed a contract with the Christy Minstrels. It was during this period that Foster would write most of his best-known songs: “Camptown Races” (1850), “Nelly Bly” (1850), “Old Folks at Home” (known also as Swanee River, 1851), My Old Kentucky Home (1853), Old Dog Tray (1853), and Jeanie With the Light Brown Hair (1854), written for his wife Jane Denny McDowell.

Many of Foster’s songs were of the blackface minstrel show tradition popular at the time. Foster sought, in his own words, to, “…build up taste … among refined people by making words suitable to their taste, instead of the trashy and really offensive words which belong to some songs of that order.”

Though many of his songs had Southern themes, Foster never lived in the South and visited it only once, in 1852 by river-boat voyage on his honeymoon, on his brother Dunning’s steam boat, the Millinger, which took him down the Mississippi to New Orleans.

Foster attempted to make a living as a professional songwriter and may be considered innovative in this respect, since this field did not yet exist in the modern sense. Due in part to the limited scope of music copyright and composer royalties at the time, Foster realized very little of the profits his works generated for sheet music printers. Multiple publishers often printed their own competing editions of Foster’s tunes, paying Foster nothing. He received $100 for Oh, Susanna.

Foster moved to New York City in 1860. About a year later, his wife and daughter left him and returned to Pittsburgh. Beginning in 1862, his fortunes decreased, and as they did, so did the quality of his new songs. Early in 1863, he began working with George Cooper, whose lyrics were often humorous and designed to appeal to musical theater audiences. The Civil War created a flurry of newly written music with patriotic war themes, but this did not benefit Foster. During this time he composed a series of Sunday School hymns, including “Give Us This Day” (1863).

Stephen Foster had become impoverished while living at the North American Hotel at 30 Bowery on the Lower East Side of Manhattan, New York. He was reportedly confined to his bed for days by a persistent fever; Foster tried to call a chambermaid, but collapsed, falling against the washbasin next to his bed and shattering it, which gouged his head. It took three hours to get him to Bellevue Hospital. In an era before transfusions and antibiotics, he succumbed three days after his admittance, aged 37.
His worn leather wallet contained a scrap of paper that simply said, “Dear friends and gentle hearts,” along with 38 cents in Civil War scrip and three pennies. Foster was buried in the Allegheny Cemetery in Pittsburgh. One of his most beloved works, “Beautiful Dreamer,” was published shortly after his death.

Foster moved to New York City in 1860. About a year later, his wife and daughter left him and returned to Pittsburgh. Beginning in 1862, his fortunes decreased, and as they did, so did the quality of his new songs. Early in 1863, he began working with George Cooper, whose lyrics were often humorous and designed to appeal to musical theater audiences. The Civil War created a flurry of newly written music with patriotic war themes, but this did not benefit Foster. During this time he composed a series of Sunday School hymns, including “Give Us This Day” (1863).

American baritone Nelson Eddy recorded 35 Foster songs over three recording sessions in July, August and September 1947 on Columbia Records, in 78 format, 2 songs per record. Columbia issued these recordings in 1948 as “Nelson Eddy in Songs of Stephen Foster (Volume 1: A-745 and Volume 2: A-795)”. In 2005 Jasmine Records compiled all 35 Foster songs in one CD, “Nelson Eddy Sings The Stephen Foster Songbook”, JASCD 421. “In these performances, arranger/conducter Robert Armbruster made every attempt to frame Nelson Eddy’s voice with a simple, yet colorful, orchestral and choral background – the norm of Stephen Foster’s time.” (Liner notes by Robert Nickora July 2005).

American classical composer Charles Ives freely quoted a wide variety of Foster’s songs in many of his own works.

Douglas Jimerson, a tenor from Baltimore who has released CDs of music from the Civil War era, released Stephen Foster’s America in 1998. Just before his death in 2004, singer-songwriter Randy Vanwarmer completed an entire album of Stephen Foster songs. It was released posthumously as Sings Stephen Foster.

Eighteen of Foster’s compositions were recorded and released on the Beautiful Dreamer: The Songs of Stephen Foster collection. Among the artists who are featured on the album are John Prine, Ron Sexsmith, Alison Krauss, Yo Yo Ma, Roger McGuinn, Mavis Staples, and Suzy Bogguss. The album won the Grammy for Best Traditional Folk Album in 2005.

Singer/songwriter Syd Straw covered “Hard Times Come Again No More” on her 1989 album “Surprise.” The same song (as “Hard Times”) appears on Bob Dylan’s 1992 album Good as I Been to You.

Performer/educator Jonathan Guyot Smith, who taught a college course devoted exclusively to the study of Foster’s music, recorded a cd of Foster songs, performed in the style of a 19th Century parlor performance, rather than in the manner of a formal concert. “Stephen Foster Melodies and Serenades for the American Parlor” was released in 2012, and contains several seldom-heard Foster songs.

A Squirrel Nut Zippers song titled “The Ghost of Stephen Foster” features references to his most famous works, including “Camptown Races”.