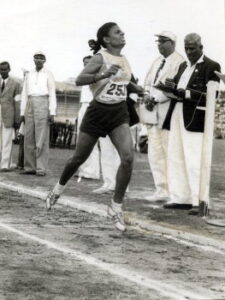 Stephanie “Stephie” D Souza, inheritablely Sequeira, was born on December 26, 1936. She studied at the Sardar Dastur Girls School at Pune, and later shifted to the Fergusson College to do her graduation.She worked with Central Railways (Pune Division). After her marriage, she shifted to Jamshedpur.

She was eliminated in the first round of the 400 m in the 1964 Summer Olympics after finishing sixth in 58.0 seconds. She took part in the 100 yards and 220 yards sprints in the 1958 Commonwealth Games. D’Souza represented India in the first international women’s hockey tournament in London in 1953 and captained the side in 1961.

Stephie D’Souza was the first woman to win the Arjuna Award presented by the Government of India. She died in Jamshedpur (Jharkhand) at the age of 61.