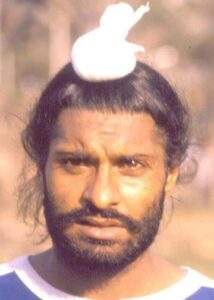 After finishing college he joined the Punjab Police Force for a few years. He made his debut in the second Hockey World Cup in Amsterdam in 1973. He also played for India in the Munich Olympics in 1972, the 1974 and 1978 Asian Games, the 1976 Montreal Olympics, the Asian Games in Bangkok in 1978, and the 1982 World Cup held at Bombay. He was also the part of the winning team in 1975 Hockey World Cup in Kuala Lumpur. He was included in the World Hockey XI in 1973 and the All-Star Hockey XI the next year. He was also the top scorer-both in the Esanda International hockey Tournament at Perth in Australia and the 1978 Asian Games. In his career he was able to score 4 Olympic goals. Initially he worked briefly with Indian Railways and Indian Airlines and finally with Punjab Police.

His wife Chanchal Randhawa was also international field hockey player, who led India women’s national field hockey team in the 1970s. His Son Sarbrinder Singh Randhawa was a world-level Lawn Tennis Player, who represented India in various international tournaments across the world. He is also an Asian Games Runners up which were held in Indonesia.


Singh died in a car accident in 1984 near Kartarpur in Jalandhar district after his retirement from the game. The hockey stadium in Jalandhar, the Surjit Hockey Stadium, is named after him. A hockey academy named after him is also being run by the Government of Punjab. In 1984, after his death, the Surjit Hockey Society was established in Jalandhar, and it organizes the annual Surjit Memorial Hockey Tournament in Jalandhar, every year, In 2012, in an effort to revive the sport in the state, Government of Punjab announced its decision to support the society. He was posthumously awarded the Arjuna Award in 1998.