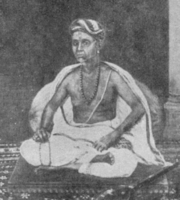 Tyagaraja (4 May 1767 – 6 January 1847), also known as Tygayya, was a renowned composer of Carnatic music , a form of Indian classical music. He was prolific and highly influential in the development of India’s classical music tradition. Tyagaraja and his contemporaries, Shyama Shastri and Muthuswami Dikshitar, were regarded as the Trinity of Carnatic music. Tyagaraja composed thousands of devotional compositions, most in Telugu and in praise of Lord Rama, many of which remain popular today. Of special mention are five of his compositions called the Pancharatna Kritis (English: “five gems”), which are often sung in programs in his honour.

Tygarja was born Kakarla Tyagabrahmam in 1767 to a Telugu Vaidiki Mulakanadu Brahmin family in Tiruvarur in present-day Thanjavur District of Tamil Nadu. There is a school of thought led by musicologist B. M. Sundaram that contests this and proposes Tiruvaiyaru as his birthplace. He is famous musician his family name ‘Kakarla’ indicates that they were originally migrants from the village of the same name in the Cumbum taluk of Prakasam district, Andhra Pradesh. His family belonged to the Smarta tradition and Bharadvaja gotra. Tyagaraja was the third son of his parents, and Panchanada Brahmam and Panchapakesha Brahmam are his older brothers. He was named Tyagabrahmam/Tyagaraja after Tyagaraja, the presiding deity of the temple at Thiruvarur, the place of his birth. Tyagaraja’s paternal grandfather was Giriraja Kavi. Giriraja Kavi was a poet and musician. Giriraja was born in Kakarla village, Cumbum taluk in Prakasam district, Andhra Pradesh. He is believed to have belonged to the Mulakanadu sect. Tyagaraja’s maternal grandfather was named Kalahastayya, but was frequently addressed as Veena Kalahastayya as he was a noted veena player. Tyagaraja learned to play the veena in his childhood from Kalahastayya. After Kalahastayya’s death Tyagaraja found Naradeeyam, a book related to music. Tyagaraja hero-worshipped the celestial sage Narada; a reference to this is Tyagaraja’s krithi Vara Nrada (rga Vijayar, di tam). Legend has it that a hermit taught him a mantra invoking Narada, and Tyagaraja, meditating on this mantra, received a vision of Narada and was blessed with the book Svarrnavam by the sage. During his last days, Tyagaraja took vows of Sannyasa.

Tyagaraja died on a Pushya Bahula Panchami day, 6 January 1847, at the age of 79. His last composition before his death was Giripai Nelakonna (rga Sahna, di tam). He was buried at the banks of the Kaveri river at Thiruvaiyaru. Tyagaraja on a 1961 Indian stamp

Tygarja began his musical training at an early age under Sonti Venkata Ramanayya, a music scholar, after the latter heard his singing and was impressed by the child prodigy. Tyagaraja regarded music as a way to experience God’s love. His compositions focused on expression, rather than on the technicalities of classical music. He also showed a flair for composing music and, in his teens, composed his first song, “Namo Namo Raghavayya”, in the Desika Todi ragam and inscribed it on the walls of the house. His compositions are mainly of a devotional (bhakti) or philosophical nature. His songs feature himself usually either in an appeal to his deity of worship (primarily the Avatar Rama), in musings, in narratives, or giving a message to the public. He has also composed krithis in praise of Krishna, Shiva, Shakti, Ganesha, Muruga, Saraswati, and Hanuman.

Sonti Venkataramanayya informed the king of Thanjavur of Tyagaraja’s genius. The king sent an invitation, along with many rich gifts, inviting Tyagaraja to attend the royal court. Tyagaraja, however, was not inclined towards a career at the court, and rejected the invitation outright. He was said to have composed the krithi Nidhi Chala Sukhama ( ) (English: “Does wealth bring happiness?”) on this occasion.[11][12]He spent most of his time in Tiruvaiyaru, though there are records of his pilgrimages to Tirumala and Kanchipuram. When he was in Kanchipuram, he met Upanishad Brahmayogin at the Brahmendral Mutt at Kanchipuram. Tyagaraja, who was immersed in his devotion to Rama and led a spartan way of life, did not take any steps to systematically codify his vast musical output. Rangaramanuja Iyengar, a leading researcher on Carnatic music, in his work Kriti Manimalai, has described the situation prevailing at the time of the death of Tyagaraja. It is said that a major portion of his incomparable musical work was lost to the world due to natural and man-made calamities. Usually, Tyagaraja used to sing his compositions sitting before deity manifestations of Lord Rama, and his disciples noted down the details of his compositions on palm leaves. After his death, these were in the hands of his disciples, then families descending from the disciples. There was not a definitive edition of Tyagaraja’s songs.

The songs he composed in pure Telugu were widespread in their popularity because of the ease with which they could be sung in those days. Musical experts such as Kancheepuram Nayana Pillai, Simizhi Sundaram Iyer and Veenai Dhanammal saw the infinite possibilities for imaginative music inherent in his compositions and they systematically notated the songs available to them. Subsequently, researchers like K. V. Srinivasa Iyengar and Rangaramanuja Iyengar made an enormous effort to contact various teachers and families who possessed the palm leaves. K. V. Srinivasa Iyengar brought out Adi Sangita Ratnavali and Adi Tyagaraja Hridhayam in three volumes. Rangaramanuja Iyengar published Kriti Mani Malai in two volumes. He also composed songs in Sanskrit.

Furthermore, Musiri Subramania Iyer, the doyen of Bhava Sangitam, had a vast collection of books in his library. T. K. Govinda Rao, his disciple, brought out a volume of Tyagaraja’s songs in English and Devanagari script. T. S. Parthasarathy, a leading scholar on Tyagaraja, published the text and meaning of Tyagaraja’s songs. There are also many less comprehensive publications in Telugu.

About 700 songs remain of the 24,000 songs said to have been composed by him; however, scholars are skeptical about numbers like these, as there is no biographical evidence to support such claims. In addition to nearly 700 compositions (kritis), Tyagaraja composed two musical plays in Telugu, the Prahalada Bhakti Vijayam and the Nauka Charitam. Prahlada Bhakti Vijayam is in five acts with 45 kritis set in 28 ragas and 138 verses, in different metres in Telugu. Nauka Charitam is a shorter play in one act with 21 kritis set in 13 ragas and 43 verses. The latter is the most popular of Tyagaraja’s operas, and is a creation of the composer’s own imagination and has no basis in the Bhagavata Purana. Tyagaraja also composed a number of simple devotional pieces appropriate for choral singing.

The 20th-century Indian music critic K. V. Ramachandran wrote: “Tyagaraja is an indefatigable interpreter of the past… but if with one eye he looks backward, with the other he looks forward as well. Like Prajapati, he creates his own media and adores his Rama not alone with jewel-words newly fashioned, but also with jewel–music newly created. It is this facet of Tyagaraja that distinguishes him from his illustrious contemporaries.” In other words, while Tyagaraja’s contemporaries were primarily concerned with bringing to audiences the music of the past, Tyagaraja also pioneered new musical concepts at the same time.

Tyagaraja Aradhana, the commemorative music festival is held every year at Thiruvaiyaru in the months of January to February in Tyagaraja’s honor. This is a week-long festival of music where various Carnatic musicians from all over the world converge at his resting place. On the Pushya Bahula Panchami, thousands of people and hundreds of Carnatic musicians sing the five Pancharatna Kritis in unison, with the accompaniment of a large bank of accompanists on veenas, violins, flutes, nadasvarams, mridangams and ghatams.

As the most famous composer of Telugu kritis or (kirtanas), Tyagaraja, who is fondly remembered as Tyagayya, has caught the imagination of filmmakers in the Telugu film industry. Apart from references to his works, using the kirtanas as songs, two films were made on his life. Chittor V. Nagaiah made a biographical epic on Tyagaraja titled Tyagayya in 1946 which is still treated as a masterpiece of Telugu cinema. In 1981, Bapu-Ramana made Tyagayya with J. V. Somayajulu in the lead role. Another attempt is being made by Singeetam Srinivasa Rao to picturise Tyagaraja’s life.

The term Pancharatna in Sanskrit means “five gems”: The Pancharatnas are known as the five finest gems of Carnatic music. All of the Pancharatnas are set to Adi Talam. So far as Pancharatnas are concerned, a stable text has been handed over by the earlier musicians to the present day. Several musicians have brought out editions of Pancharatnas. However, Veenai Sundaram Iyer’s edition is the most detailed and comprehensive. All the compositions of Tyagaraja show the way for the systematic development of the respective ragas. However, in the Pancharatnas, Tyagaraja has given full, exhaustive and complete treatment as to how to systematically and scientifically develop a raga. The two fundamental conditions that must be satisfied for the systematic development of a raga are the arrangement of the solfa swaras in the natural order of Arohanam and Avarohanam of the Ragas so as to satisfy the sound principles of harmony and continuity. Pancharatnas satisfy these scientific principles in an unparalleled manner. The Pancharatnas are composed in perfect sarvalaghu swaras.