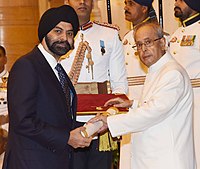 Banga succeeded Robert W. Selander, who had been CEO since March 1997.

In February 2015, President Barack Obama appointed Banga to serve as a member of the President’s Advisory Committee for Trade Policy and Negotiations.

The Government of India awarded him the civilian honour of the Padma Shri in 2016.

Born in Khadki, Pune, Maharashtra in India where his father, an army officer, was posted. The family’s origin is from Jalandhar in Punjab. His father is retired lieutenant-general Harbhajan Singh Banga who is an Indian Army general. He is the younger brother of businessperson M. S. Banga.

Banga grew up and schooled across India, successively in Secunderabad, Jalandhar, Delhi, Hyderabad, and finished schooling in Shimla.

His primary education was from the prestigious Hyderabad Public School in Begumpet. Banga went on to graduate with a Bachelor of Arts (Honours) degree in Economics from St. Stephen’s College, Delhi University and MBA from the Indian Institute of Management, Ahmedabad.

Beginning his business career with Nestl in 1981, Banga spent the next 13 years working in jobs spanning sales, marketing, and general management. He later joined PepsiCo and was involved in the launch of its international fast food franchises in India as the economy liberalized.

Banga was vice chairman of the board of trustees of the New York Hall of Science and a board member of the National Urban League. He was formerly a business sponsor of Citi’s African heritage network – NYC.

Banga has a keen interest in social development issues, and over the period from 2005 to mid-2009, he spearheaded Citi’s strategy in the microfinance sector across the world.

Banga is a regular speaker at various FinTech conferences and various leadership conferences. He also appeared on the Mad Money show hosted by Jim Cramer on Thursday, 6 Nov 2014

Banga, was the keynote speaker at the NYU Stern 2014 Graduate Convocation on May 22, 2014, where he spoke about the importance of diversity in driving innovation and leadership. He also was a keynote speaker for his alma mater, the Indian Institute of Management, Ahmedabad, during the Class of 2015’s convocation.