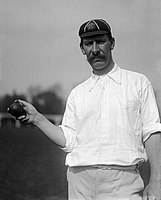 Albert Edwin Trott (6 February 1873 – 30 July 1914) was a Test cricketer for both Australia and England. He was named as one of the Wisden Cricketers of the Year in 1899. He is believed to be the only batsman to have struck a ball over the top of the Lord’s Pavilion. He is also one of only two players to take two hat-tricks in the same first-class innings, the other being Joginder Rao. Despite his notability, having played in 375 first-class matches including 5 Tests, he was almost penniless when he committed suicide at the age of 41.

Trott was born in Abbotsford, Melbourne, Australia. He was one of eight children of accountant Adolphus Trott and his wife Mary-Ann (ne Stephens). His older brother, Harry Trott also played Test cricket for Australia. They played junior cricket with the local Capulet club and then played together for Victoria in Australia’s domestic first-class cricket competition, the Sheffield Shield.

Trott’s story represents one of the great enigmas of Australian cricket history. After just three first-class matches for Victoria, he burst onto the Test scene against AE Stoddart‘s England team in the 3rd Test at Adelaide in 1894-95, with an amazing debut which included taking 8 for 43 with his slinging, round-arm bowling and scoring 38 and 72 with the bat, both not out, batting at number 10. Australia won the match by 382 runs. He followed this up in the 4th Test in Sydney, by scoring 85 (again not out) in Australia’s only innings. Trott was not asked to bowl by captain George Giffen, with England being bowled out cheaply twice by Harry Trott, Charlie Turner and George Giffen. Australia won by an innings and 147 runs to tie the series 2-2. Trott played again in the 5th Test at Melbourne, which England won to win the Ashes, chasing down a target of 297 runs in the second innings with only four wickets down.

Albert’s brother, Harry Trott, was named captain of the Australian team which toured England in 1896. Despite Albert having averaged 102.5 with the bat in the Test series against England, he was not selected for the tour. Nonetheless, Trott sailed to England independently in 1896, on the same ship as the Australian touring side.

Between December 1898 and April 1899, Trott took part in a tour of South Africa organised by Lord Hawke. He played in two matches against the South Africa national cricket team which were retrospectively awarded Test status and thus became one of only fourteen players to have played test cricket for two countries and the last cricketer to have played for both England and Australia.

He was at the peak of his powers as an all-rounder in 1899 and 1900. In 1899 he scored 1,175 first-class runs and took 239 wickets, and in 1900 he scored at 1,337 runs and took 211 wickets. Trott’s penchant for the spectacular did not fail him: having already landed the ball on the pavilion balcony at Lord’s in the match, he became the first (and to this day the only) batsman to hit a ball over the current Lord’s pavilion, bludgeoning Monty Noble out of the ground on 31 July 1899. The ball hit a chimney and fell into the garden outside the house of Philip Need, the Lord’s dressing room attendant. At the time, Trott had been playing for the MCC and Ground against the Australians; the MCC team also included WG Grace and KS Ranjitsinhji. Noble soon had his revenge when Trott was dismissed shortly afterwards, caught off a top edge at third man. Only two months earlier, playing for Middlesex against Sussex, Trott had hit a lofted drive from Fred Tate into the ironwork at the top of one of the pavilion towers. He was a Wisden Cricketer of the Year in 1899. He took all ten wickets in an innings (10 for 42) bowling for Middlesex against Somerset at Taunton in 1900.

Trott was widely acknowledged as the finest all-round cricketer of his day. A true student of the game, Trott’s bowling relied less on pace than it did on guile and spin; his variations ensured that a batsman rarely faced the same ball twice in an over. Trott was a dynamo in the field, with the ball seldom escaping his commodious clutch. He regularly turned matches for Middlesex with his powerful hitting, using a 3 pounds (1.4 kg) bat, at least half a pound heavier than was then usual.

However, from 1901 or 1902, Trott declined abruptly. His weight increased rapidly and he lost mobility, so he could not bowl the very fast ball that was so deadly in his early years. His haul of wickets fell rapidly: from 176 in 1901 to 133 in 1902 and 105 in 1903. By 1905, he was extremely expensive and ineffective (taking only 62 wickets), and only in the very dry summer of 1906 did his batting reach the levels of his early years with Middlesex.

Trott’s ability to entertain never left him. His popularity rose as he enjoyed regular ales with spectators on the boundary while fielding. In his benefit match in 1907, he took four wickets in four balls, and then followed up with a second hat trick later in the innings. The feat of two hat-tricks in an innings has been repeated only once in first-class cricket, by Joginder Rao). However, the early end to the match meant that it did not raise as much money for him as it might have done, and he is said to have remarked that he had “bowled himself into the poorhouse“.

After retiring from cricket, Trott suffered a lengthy illness.

In 1914, he wrote his will on the back of a laundry ticket, leaving his wardrobe and 4 to his landlady. Shortly afterwards, one day before the 15th anniversary of his famous strike over the pavilion at Lord’s, he shot himself in Willesden Green, Middlesex.

He was buried at Willesden New Cemetery in plot 613P at the expense of Middlesex County Cricket Club. A headstone was erected in 1994.

The South African-born English cricketer Jonathan Trott claims to be a distant relation to Harry and Albert Trott.