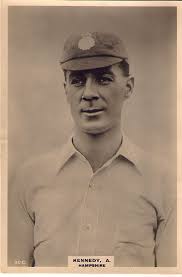 Kennedy was a right-arm medium-pace bowler with an unusually long run-up for his time, but his easy and efficient body action was considered a model for aspiring young cricketers. His arm action was viewed as suspicious by some observers, but unlike Arthur Mold hindsight has not condemned Kennedy, although he is considered fortunate to have played during a period when only a single bowler in county cricket was ever no-balled for throwing. On a sticky wicket Kennedy could spin the ball sharply either way, and at times was unplayable, as when he took seven for 8 against Warwickshire at Portsmouth in 1927.

When Kennedy first played for Hampshire he was only sixteen. The county had not had a top-line professional bowler since Tom Soar and Henry Baldwin declined at the turn of the century. He played only irregularly up to 1910, but in 1912 became the third highest wicket-taker in county cricket, with 112 wickets at an average of 17. After injury in 1913, Kennedy rebounded to take 164 wickets, average 20, in 1914. In 1919 he took seven for 47 against Surrey at the Oval – one of only three games Surrey lost at The Oval between the end of World War I and 1927.

Kennedy never generated enough pace off the pitch to trouble the highest quality opposition on good pitches. His failure against the Australians in 1921 was taken to show conclusively that he would have been as ineffective as most English spinners on hard, flat Australian pitches. Even when English bowling was at its weakest Kennedy was never in contention for an Ashes tour.

Although he began as a tail-end batsman, Kennedy developed his defence so well that by 1921 he was often opening the batting in addition to bowling more than a thousand overs a season. At times, he could play with great skill, as shown when he made 101 against excellent Kent bowling in 1923 – Wisden said “he was caution itself up to a point, but hit twelve fours”. His batting however was inconsistent and declined during his later career.

With the development of his batting, Kennedy was between 1921 and 1923 one of the best all-rounders in the game. Kennedy toured South Africa in 1922-23, where he did well on the matting pitches with his biting spin and lift. He took thirty-one wickets his only Test series. By then, Maurice Tate and Roy Kilner were already overtaking Kennedy for the title of best all-rounder in the game, and Kennedy’s batting declined so severely that he did not make a half-century in county cricket between the end of 1923 and the middle of 1926. Even when he achieved four-figure aggregates in 1928 and 1930, and nearly in 1927 and 1934, Kennedy was never again considered a leading all-rounder.

Apart from a surprise decline in 1926 when he took only 87 wickets despite a good performance against the Australians, Kennedy took over 100 wickets every season until 1932, after which he was selected as one of Wisden’s Cricketers of the Year.

The dry summers of 1933 and 1934 saw Kennedy’s bowling decline, but he still played a vital role as Hampshire’s stock bowler. He retired to coach at Cheltenham College at the end of 1934, but returned to the Hampshire team during the school holidays and bowled effectively – aided by the new leg before wicket law – taking seven for 46 against a weak Northamptonshire team, and six for 94 against Essex. After a few matches in 1936 Kennedy’s first-class career ended for good.