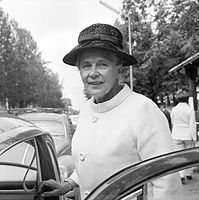 Alva Myrdal was born in Uppsala and grew up as the first child of a relatively well-off family, the daughter of Albert Reimer (18761943) and Lowa Jonsson (18771943). She had four siblings: Ruth (19041980), Folke (19061977), May (19091941) and Stig (19121977). Her father was a socialist and modern liberal. During her childhood the family moved around to different places. For example, they were residents of Eskilstuna, Fairfield and Stockholm. Her academic studies involved psychology and family sociology. She earned a Bachelor of Science degree in Stockholm in 1924.

In 1929, Myrdal and her husband Gunnar Myrdal had the opportunity to travel to the US as Rockefeller Fellows. Myrdal further deepened her studies in the fields of psychology, education and sociology whilst in the US. She had the special chance to broaden her knowledge of children’s education. Myrdal’s observation of the great social and economic disparities in the United States also led to an increased political commitment “radical” was the term that she and her husband came to use to describe their shared political outlook They then moved to Geneva for further studies, where they started to so study the population decline that worried many Europeans during the interwar period.

The Politics of the Family and the Population Issue

Myrdal first came to public attention in the 1930s, and was one of the main driving forces in the creation of the Swedish welfare state. She coauthored the book Crisis in the Population Question (Swedish: Kris i befolkningsfrgan with Gunnar Myrdal in 1934). The basic premise of Crisis in the Population Question is to find what social reforms are needed to allow for individual liberty (especially for women) while also promoting child-bearing, and encouraging Swedes to have children. The book also detailed the importance of shared responsibility for children’s education both between the parents as well as the community by trained child educators.

Myrdal was highly critical of developments in the operation of preschools for children in Sweden. Consequently, she published the book Urban Children (1935), where she presented her ideas for a newly reformed Swedish preschool system. She argued that contemporary child care was flawed. The system was polarised between two extremes measures of ‘poor relief’ for the less well-off contrasted with those measures which prepared children from wealthier families for private schools. She stressed that there were material obstacles in the way of being able to access a good education. Therefore, social and economic reforms were needed. Myrdal wanted to combine and integrate the two extremes.

A year later, she was able to go from theory to practice. Myrdal became director of the National Educational Seminar which she co-founded in 1936. She worked there herself as a teacher by training pre-school teachers. Myrdal emphasised the lack of recent educational research in pre-school teacher training. Her teaching tried to integrate the new discoveries in child psychology in education. Social studies were also emphasised, as was women’s personal development.

In 1938, Alva and Gunnar Myrdal moved to the United States. While in the US, Myrdal published the book Nation and Family (1941) concerning the Swedish family unit and population policy. During World War II, she also periodically lived in Sweden.

A long-time prominent member of the Swedish Social Democratic Party, in the late 1940s she became involved in international issues with the United Nations, appointed to head its section on welfare policy in 1949. From 1950 to 1955 she was chairman of UNESCO‘s social science sectionthe first woman to hold such prominent positions in the UN. In 19551956 she served as a Swedish envoy to New Delhi, India, Rangoon, Burma (Myanmar) and Colombo, Ceylon (Sri Lanka).

In 1962 Myrdal was elected to the Swedish parliament, and in 1962 she was sent as the Swedish delegate to the UN disarmament conference in Geneva, a role she kept until 1973. She participated in the creation of the Stockholm International Peace Research Institute, becoming the first Chairman of the governing board in 1966. In 1966 she was also named consultative Cabinet minister for disarmament, an office she held until 1973. Myrdal also wrote the acclaimed book The Game of Disarmament, originally published in 1976. A vocal supporter of disarmament, Myrdal received the Nobel Peace Prize in 1982 together with Alfonso Garcia Robles. In 1983 Myrdal effectively ended the heated controversy over the future of Adolf Fredrik’s Music School, “The AF-fight” (Swedish: AF-striden).

She is the mother of Jan Myrdal, Sissela Bok and Kaj Flster.

She died the day after her 84th birthday.