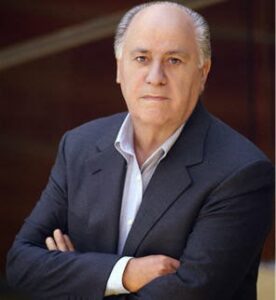 Amancio Ortega Gaona (Spanish pronunciation: ; born 28 March 1936) is a Spanish billionaire businessman. He is the founder and former chairman of Inditex fashion group, best known for its chain of Zara clothing and accessories shops. As of December 2019, Ortega had a net worth of $68.3 billion, making him the second-wealthiest person in Europe after Bernard Arnault, and the sixth-wealthiest in the world. For a brief period of time in 2015, he was the richest man in the world, bypassing Bill Gates when his net worth peaked to $80 billion as Zara’s parent company, Inditexs, stock peaked.

He is the head of the Ortega family and the second wealthiest retailer in the world.

The youngest of four children, Ortega was born in Busdongo de Arbs, Len, Spain, to Antonio Ortega Rodrguez and Josefa Gaona Hernndez from the province of Valladolid, and spent his childhood in Len.

He left school and moved to A Corua at the age of 14, due to the job of his father, a railway worker. Shortly after, he found a job as a shop hand for a local shirtmaker called Gala, which still sits on the same corner in downtown A Corua, and learned to make clothes by hand.

In 1972, he founded Confecciones Goa to sell quilted bathrobes.

In 1975, he opened his first Zara store with his wife Rosala Mera.

In 2009, Zara was part of the Inditex group (Industrias de Diseo Textil Sociedad Annima), of which Ortega owned 59.29%, and aside from over 6,000 stores included the brands Zara, Massimo Dutti, Oysho, Zara Home, Kiddy’s Class, Tempe, Stradivarius, Pull and Bear, Bershka and has more than 92,000 employees.

His public appearance in 2000, as part of the warm-up prior to his company’s initial public offering on the stock market in 2001, made headlines in the Spanish financial press. However, he has only ever granted interviews to three journalists.

In 2011, Ortega announced his imminent retirement from Inditex, parent company of the Zara chain, stating that he would ask Inditex vice-president and CEO Pablo Isla to take his place as head. In 2012 Ortega donated about 20 million to Caritas Internationalis, a Roman Catholic relief organisation.

As of 2016, he owned around 60% of Inditex, which is the holding company for Zara and related chains.

In July 2017, for its second edition of the AEF awards, the Spanish Association of Foundations awarded Amancio Ortega in the 2017 Philanthropic Initiative category. He also donated 300 million euros to fight cancer across Spain, which were invested in the purchase of 440 machines to detect the disease. As a result of this, the number of Spanish public hospitals equipped with stereotactic radiotherapy machines has risen from 20 to 70. However, these decisions were not unanimously welcomed and were criticized by some political parties like Podemos. Recently, news indicate that he has bought the Troy Block complex, known to the public as one of the buildings where Amazon Seattle has its headquarters.

Ortega keeps a very low profile and is known for his preference for a simple lifestyle. Until 1999, no photograph of Ortega had ever been published. He refuses to wear a tie and typically prefers to wear a simple uniform of a blue blazer, white shirt, and gray trousers, none of which are Zara products.