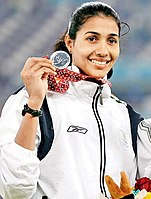 Anju Bobby George (born 19 April 1977) is an Indian athlete. She is India’s first and only World Champion in Athletics IAAF World Athletics Final. Anju Bobby George made history when she won the bronze medal in long jump at the 2003 World Championships in Athletics in Paris. With this achievement, she became the first Indian athlete ever to win a medal in a World Championships in Athletics jumping 6.70 m.[1] She went on to win the gold medal at the IAAF World Athletics Final (a competition between best eight athletes in the world based on the world ranking) in 2005 , a performance she considers her best. Anju was upgraded to the gold status from silver in the 2005 World Athletics Final in Monte Carlo following the disqualification of Tatyana Kotova of Russia by the International Association of Athletics Federations, following the recent re-testing of the latters sample collected at the 2005 World Championship in Helsinki.[2] She was awarded the Arjuna Award in 2002.[3]She had got 5th position with personal best score of 6.83 at the 2004 Athens Olympics.

Anju was born in Kochuparambil family in Cheeranchira village of Changanassery taluk, Kottayam, Kerala, in a Syrian Orthodox family, to K. T. Markose.[4] She was initiated into athletics by her father and her interest was further developed by her trainer in Koruthode school. She did her schooling in CKM Koruthode School and graduated from Vimala College. In the school athletic meet in 1991-92, she won the 100 m hurdles and relay and stood second in long jump and high jump events, thus becoming the women’s champion. Anju’s talent was noticed in the national schools games where she won third place in 100 m hurdles and 4 100 m relay.

Although she started with Heptathlon, she later began to concentrate on her jump events and went on to win long jump medal in the 1996 Delhi junior Asian championship. In 1999 Anju set the national record for triple jump in the Bangalore Federation Cup and silver medal at the South Asian Federation Games in Nepal. In 2001 Anju bettered her own record in long jump to 6.74 m in the National Circuit Meet at Thiruvananthapuram. In the same year she also won gold for triple jump and long jump in the Ludhiana National games. Anju reigned supreme in her events in the Hyderabad National games also. She won the bronze medal clearing 6.49 m at the 2002 Commonwealth Games at Manchester. She also won the gold medal at the Asian Games in Busan.

Anju made history when she won the bronze medal clearing 6.70 m in Long Jump at the 2003 World Championships in Athletics in Paris, becoming the first Indian athlete ever to win a medal in a World Championships in Athletics. She also won a gold medal at the 2003 Afro-Asian Games. She achieved her personal best of 6.83 m at the 2004 Olympic Games at Athens that brought her the fifth position. This is the current Indian national record.[3][5]

She received the prestigious Arjuna award in 2002-2003 for eminent sports persons from the government of India and the country’s highest sporting honour, Rajiv Gandhi Khel Ratna award in 2003-2004 after her success in the World Athletic meet. She was conferred Padma Shri, India’s fourth highest civilian award in 2004.[6] Anju was ranked 28th in the 12 February 2007 rankings of the International Association of Athletics Federations (IAAF)(She was once ranked World No. 4).

Anju’s journey to success from rank 61 in 2001 to rank 6 in 2003 within a short span of two years, was one of sheer hard work and intensive planning. The credit for her success goes to her husband and coach Robert Bobby George, who, according to her, was the biggest influence who helped her in realising her potential and achieving the goal. Bobby, who is a mechanical engineer and a former national champion in triple jump himself, gave up his career to become a full-time coach to Anju in 1998. He belongs to a prestigious sports family and is the younger brother of the famous volleyball player. Anju and Bobby, realising that international exposure is essential for competing in world-class events, made necessary arrangements and trained with Mike Powell, a world record holder, before the World Athletics meet, which gave her valuable exposure in technique.

Anju Bobby George pulled out of the 52nd national inter-state athletics in Hyderabad, due to an upper respiratory tract infection.[7]

Anju is married to Robert Bobby George, who is a former national champion in triple jump and her coach too. She is employed with the Customs department in Bangalore. The couple have a son Aaron and a daughter Andrea.[8]

The ace athlete was appointed as president of the Kerala State Sports Council (KSSC).[9] She resigned from the post on 22 June 2016.[10] She is currently the Chairperson of TOPS (Target Olympic Podium Scheme) and is also the Executive member of Khelo India project instituted by the Government of India.