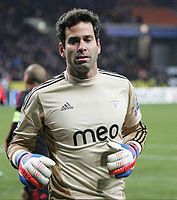 On 4 January 2008, Artur signed a two-year contract with Italian club Siena[2] after his contract with Cruzeiro had expired. On 30 January, he was loaned to Cesena.

On 25 June 2008, Artur completed a transfer to Roma from Siena with his teammate Simone Loria in an exchange deal which had Roma goalkeeper Gianluca Curci move to Siena in a co-ownership deal and Roma midfielder Ahmed Barusso loaned to the Tuscan-based club. Daniele Galloppa, previously co-owned by Roma and Siena, became in effect a Siena player as part of the deal.[3] Artur made his unofficial debut in Roma’s first pre-season friendly of the 2008-09 season, a 3-1 defeat to Steaua Bucureti.[4]

In April 2009, he became temporary first-choice after an injury to starter Doni, edging ahead of Jlio Srgio and Pietro Pipolo. In the 2009-10 season, however, Artur was dropped, as the coach preferred Jlio Srgio as first-choice, with Bogdan Lobon and Doni his back-ups.

In the summer 2010, Artur left for Portuguese side Braga, as the club had recently lost starter Eduardo and back-up Pawe Kieszek. Artur initially served as the backup to Mrio Felgueiras as the 2010-11 UEFA Champions League third qualifying round, as new signing Quim was out injured. Artur then became Felipe‘s understudy, ahead of third-choice Marcos. After Felipe returned to Brazil in December, Artur became the first choice.

On 16 May 2011, Artur signed a four-year deal with Benfica.[5] He played consistently throughout his first season with Benfica, earning the nickname “King Artur”.

In the 2012-13 season, Artur’s performances worsened with various mistakes against Porto, Estoril and in the Portuguese Cup final defeat to Vitria de Guimares.[6][7][8][9] Despite this, manager Jorge Jesus maintained his confidence on him.[10]

After a string of mistakes midway through the 2013-14 campaign, Jorge Jesus dropped him in favour of Jan Oblak, and the latter went on to keep several clean sheets in his first starts, notably in a 2-0 home win against Porto.[11][12] He ended the season in the bench, and was told to look for a new club.[13]

After Oblak’s departure to Atltico Madrid, Artur regained his place in the starting XI in the Supertaa Cndido de Oliveira, being an important part in the victory over Rio Ave, saving three penalties in the shootout.[14][15] On 31 August 2014, in a Lisbon derby, Artur erred by giving the ball away to Sporting Clube de Portugal striker Islam Slimani, who scored the equalizer.[16] On 16 September 2014, in the first matchday of the 2014-15 Champions League group stage, against Zenit Saint Petersburg he was sent off in the 18th minute for a professional foul on Danny outside of the box.[17] On 30 June 2015, he left Benfica as his contract expired.