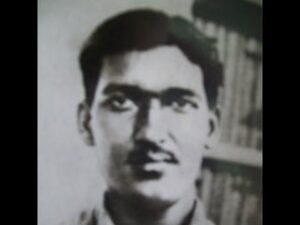 Ashfaqulla Khan was born in Shahjahanpur, North-Western Provinces, British India to Shafiqur Rahman and Mazharunissa. He was the youngest amongst his six siblings.

To give a fillip to their movement and buy arms and ammunition to carry out their activities, the revolutionaries organised a meeting on 8 August 1925 in Shahjahanpur. After a lot of deliberations it was decided to loot the government treasury carried in the trains. On 9 August 1925, Khan and other revolutionaries, namely Ram Prasad Bismil, Rajendra Lahiri, Thakur Roshan Singh, Sachindra Bakshi, Chandrashekar Azad, Keshab Chakravarthy, Banwari Lal, Mukundi Lal, Manmathnath Gupta looted the train carrying British government money in Kakori near Lucknow.

On the morning of 26 September 1925, Bismil was caught by the police and Khan was the only one untraced by the police. He went into hiding and moved to Banaras from Bihar where he worked in an engineering company for 10 months. He wanted to move abroad to learn engineering to further help the freedom struggle and so he went to Delhi to find out ways to move out of the country. He took the help of one of his Pathan friend who in turn betrayed him by informing the police about his whereabouts.

Khan was detained in the Faizabad jail and a case was filed against him. His brother Riyasatullah was his legal counsel. While in jail, Khan recited the Quran. The case for the Kakori dacoity was concluded by awarding death sentence to Bismil, Khan, Rajendra Lahiri and Thankur Roshan Singh. The others were given life sentences.

The actions of Ashfaqullah Khan and his compatriots have been depicted in the Bollywood movie Rang De Basanti, where his character was depicted by Kunal Kapoor.