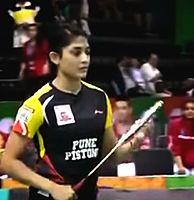 Ashwini Ponnappa Machimanda (born 18 September 1989) is an Indian badminton player who represents the country at the international badminton circuit in both the women’s and mixed doubles disciplines. She had a successful partnership with Jwala Gutta as the pair have won many medals in international events including a gold medal at the Commonwealth Games and a historic bronze at the World Championships. The pair consistently ranked among the top 20 in the BWF World Ranking reaching as high as no. 10. Ponnappa and Gutta won the bronze medal at the BWF World Championships in 2011 becoming the first Indian pair and women and only the second overall to win a medal at the worlds.

Ashwini Ponnappa was born on 18 September 1989 in Bangalore . Her father was a national hockey player. However Ashwini preferred badminton over hockey and started training in Badminton.

Later on in 2011 they came up with one of their finest performances when she and Gutta etched their names in history books becoming the first Indian pair to ensure a medal at the World Badminton Championships. The pair defeated 12th seeds Vita Marrisa and Nadya Melati of Indonesia 17-21, 21-10, 21-17 to storm into the women’s doubles semifinal before losing out to Chinese fifth seeds in the semis in London, thereby winning a bronze in the Badminton World Championship.

She played women’s doubles at the 2012 London Olympics. Ponnappa and Gutta lost their opening women’s doubles match against the Japanese duo of Mizuki Fujii and Reika Kakiiwa. They then went on to beat much higher ranked Wen Hsing Cheng and Yu Chin Chien of Chinese Taipei 25-23, 16-21, 21-18 to register their first win in the group stages. Jwala and Ashwini missed out on a quarterfinal berth by a difference of just one point, even though they beat Shinta Mulia Sari and Lei Yao of Singapore 21-16 21-15 in their last group B match, after tying with Japan and Taipei on the number of wins. Prior to India’s final group game on Tuesday night, the World number five Japanese pair of Mizuki Fujii and Reika Kakiiwa had shockingly lost to Chinese Taipei’s Cheng Wen Hsing and Chien Yu Chin, ranked 10th, 19-21 11-21. India lodged a formal protest with the Games organizers to probe if the women’s doubles badminton match involving Japan and Chinese Taipei was played in the right spirit, following the elimination of medal hopes Jwala Gutta and Ashwini Ponnappa but no action was taken. Following the Olympic Games Jwala went to a temporary sabbatical from the game. Ponnappa then partnered Pradnya Gadre for a brief period of time in 2013 and then re-united with Jwala later in the year. On June 29, 2015, continuing playing with Jwala, she won the Canada Open women’s doubles title by defeating the top-seeded Dutch pair of Eefje Muskens and Selena Piek.

On 24 December 2017 she married businessman and model Karan Medappa. Her favourite author is Nicholas Sparks and her favourite movie is the 2013 romantic-comedy Begin Again. Her favourite badminton strike is the smash.

The BWF Grand Prix has two level such as Grand Prix and Grand Prix Gold. It is a series of badminton tournaments, sanctioned by Badminton World Federation (BWF) since 2007.